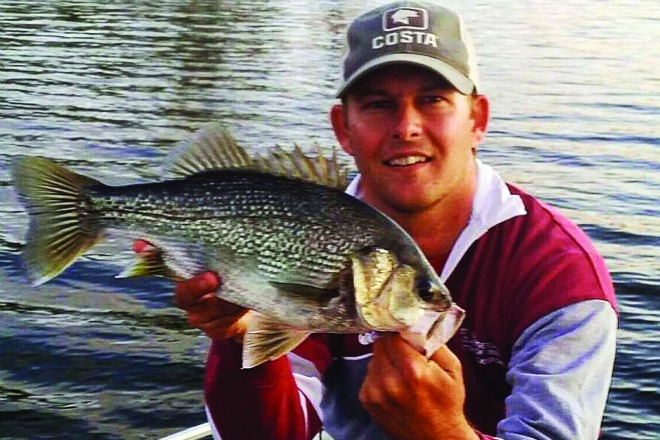 ANOTHER sensational month of fishing has gone by since my last report and things have become a little crazy at Lake Barambah, with fish virtually jumping in the boat.

The latest bout of warm weather has really fired up our native fish populations in both dams, but more so in Barambah. It’s an exciting time of year as the fish really go into feeding mode and some of the best catches usually happen during this month in the South Burnett.

Lake Boondooma
Boondooma is a well-known big bass fishery and the past month hasn’t let us down. Good numbers of sizeable bass and yellowbelly have been caught all around the dam using a variety of techniques. If you’re a keen lure fisher, the best place to start is on the edge.

Look for rocky points or edges with a bit of structure and you’re sure to pick up a fish or two casting lipless cranks and spinnerbaits. I like throwing a 3/8oz Bassman Spinnerbait in Olive colour tight to the edge, letting it sink to the bottom and using a slow wind back to the boat with a couple of rod shakes in between to entice a strike.

During these warmer months the fish respond really well to a reaction lure, so keep that in mind when casting to a bank. Mix up your casts and retrieve speed and adjust to whatever is getting the bites. I like to ‘burn’ or quickly crank a lure back occasionally to get the fish to hit aggressively.
If you’re doing this, hold onto your rod because the bite is usually hard and fast.

Some cracking golden perch and bass have been captured from the edge over the past month, so it will pay to start this way on your day out. The best quality bass have been caught out on the flats later in the morning as the wind begins to pick up. Areas such as the Junction through to Pelican Point have been productive, as has Death Valley, Barbers Pole and Leisagangs Ledge.

Check with the kiosk if you’re unsure of the names of areas in the dam and the staff will be sure to help out. I like targeting the areas just wide of the flats because they start to drop off into deeper water. I’ve found the fish sitting on these ledges are usually more willing to bite.
Ambush points like this are great for predatory bass, so keep this in mind next time you’re on Boondooma.

The best techniques for flats and ledges are using 12g Nories tailspinners in gold, 1/2oz-rigged plastics in darker green or fluorescent colours, 5/8oz spinnerbaits rolled slowly along the bottom and 1/4oz and 3/8oz blades in silver or gold hopped or slow rolled along the bottom. Bait fishers have brought in consistent catches of yellowbelly, bass and eel-tailed catfish in the timbered arms.
A consistent area is the Boyne arm around the big boulders that are on the right-hand side when heading up the dam. Ideal baits have been live shrimp, saltwater yabbies and worms jigged off the bottom. Trollers have started to pick up some quality golden perch in the arms of the dam using deep-diving hard-bodies.
Make sure you have a lure retriever handy because you’re bound to get caught up in the timber eventually. With the consistent warm weather, red claw have started to pick up a bit around the rocky edges for those using rockmelon, pumpkin and dog biscuits as bait.

Lake Barambah
Lake Barambah has been the pick of the two dams, with bass coming up from the deeper flats and creek beds to feed heavily on the edges. Most anglers have reported 20 to 50-fish sessions and some cracking bass and yellowbelly among the catch. The fish aren’t afraid to hit anything that resembles a baitfish.

The consistent warm weather can be thanked for this and it’s only going to get better the closer we get to summer. I’ve found the best method for getting into the action is to look for a good rocky edge, position yourself 40-50m from the bank, cast towards the edge, let the lure sink to the bottom and start a slow and consistent wind. For me, the best techniques have been using lipless cranks, spinnerbaits, tailspinners, 1/2oz-rigged plastics, jerkbaits and ice jigs.

Realistically, if you throw your favourite lure to the edge for long enough it’s bound to get smashed by a hungry bass or yellowbelly – the fishing is just that good at the moment. Likely areas to target are all over the dam from the dam wall to the timber right up the back. Just look for a rocky edge, sit out wide and cast towards the bank; it’s truly that simple.

Trollers are having the same luck by trolling the edges of the dam with deep-diving hard-bodies. Most trollers won’t have to go far before hooking up to a fish or two. Bait fishers are in much the same boat, with fish coming from most locations close to the bank for anglers using live shrimp, saltwater yabbies and worms fished closed to the bottom. Red claw are also on a comeback as the water warms considerably.

Next time you’re out at one of the dams in the South Burnett region, keep in mind the brand-new luxury cabins. We recently had the privilege of staying in one of the cabins and it was fantastic. It was comfortable and a great way to relax after a hard session of fishing. The cabins are fully furnished, have two bedrooms and can comfortably sleep up to six people at a cost of $150 per night.

And don’t forget the festive season is almost upon us, so be sure to get in quick and book your site at Yallakool or Boondooma. The fireworks display at Boondooma for the New Year’s celebration is set to be the biggest and best yet, so don’t miss out. Until next time, tight lines and bent rods.