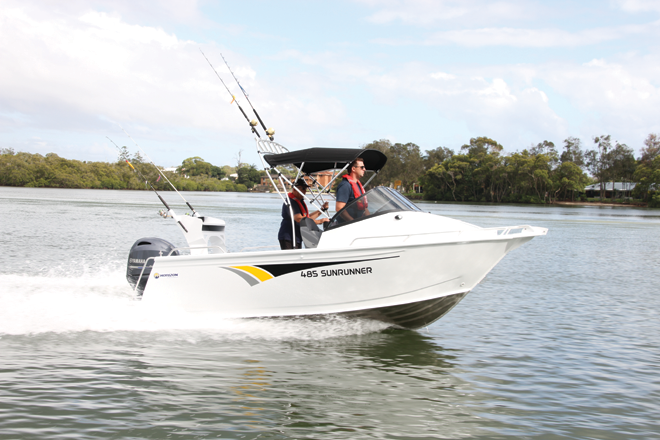 A RECENT stormy day saw me on the water in the Tweed River checking out the latest iteration of the Horizon SunRunner, this particular boat being the 485 model that measures 4.9m from bow to transom.

First impressions were that it was a good-looking rig, especially from a side-on profile. The SunRunner is a runabout but initially gives the impression of being a cabin boat, with a raised foredeck and ‘cabin’-style structure as well as an elevated seating position at the helm. That side-on profile is quite a sleek one, with a ‘swept back’ design theme carrying through from the bimini to the optional rocket launcher and bait board.

Having already jumped in a Horizon 485 Scorpion Cuddy powered by a Yamaha 60hp four-stroke, I was eager to see how this same size but slicker-styled and lighter rig would perform with 90 of Yamaha’s finest horses bolted to the stern. Very well, as it turned out. The 1.8-litre, single-cam Yamaha F90LB proved the perfect partner for this sub-5m rig, winding out effortlessly and bringing the 485 SunRunner onto the plane almost as soon as the throttle was touched.

This thing seriously accelerated out of the hole, and previous Yamaha testing of this outfit showed a 0-40km/h time of 4.95 seconds, achieved in 31m, which is downright impressive in my books. I love having plenty of power behind a boat as long as it doesn’t impact too heavily on fuel usage, and though 90hp is the maximum allowable for the 485 SunRunner, the boat’s light dry weight meant the 90hp Yamaha wasn’t raising a sweat while punching along.

And it goes without saying that even at speed the motor was barely humming, making for easy conversation to be held throughout the boat. Flat chat, the setup recorded a top speed of 63km/h at 6000rpm while using 38.95 litres of fuel per hour (1.63km/L). Throttling back to 3500rpm saw speed almost halved to 34km/h, but fuel range improved markedly to 11.25 litres per hour (3.02km/L).

An 80-litre underfloor fuel tank as standard results in a cruising range of about 230km, based on 95 percent fuel capacity, making this medium-sized boat a viable big bay or even offshore fishing proposition. Indeed, high sides, solid 3mm construction, Horizon’s Hydro Lift hull and plenty of fishing space enhance the idea of the SunRunner as a fishing weapon, but this is a boat built with the family fisho firmly in mind.

A fully carpeted floor from stem to stern, a very comfy seating arrangement including fold-away rear lounge with padded backrest, grab rails all round at the helm and a great under-dash storage arrangement as well as underfloor storage mean the 485 SunRunner will readily cater to the family boater as well as the hardcore fisho. At the helm, the comfy seats provide a great view of the water through the sleek curved windscreen and the dash area has loads of space for flush mounting today’s big-screen electronics.

Four flush-mounted cup holders are a nice addition (plus two in the bait board), as are the four flush rod holders (plus two more on the bait board) arranged neatly around the gunwales and angled perfectly for bait fishing. The gunwales are at a comfortable height for leaning against too, which is ideal when tackling solid fish offshore. As mentioned, the cockpit is seriously generous in size for loads of fishing space, afforded by the cab-forward driving position and healthy 2.4m beam.

Entry and egress is a cinch thanks to a swinging rear door, checker plate internal step and non-slip external step with folding ladder. Getting to the anchor well has been made easier for 2018, with the windscreen opening in the centre and the raised foredeck also featuring a centre door that encloses the anchor well for a sleek design and allows you to walk right up to the well once opened.

Ease of use and value for money are two core concerns for Horizon Aluminium Boats when designing and updating new models, and these are two boxes very well ticked by the 2018 485 SunRunner. With drive-away packages starting from about $38,000 (from Chelsea Yamaha Melbourne), this well-equipped and beautifully laid-out rig should fall well under budget for most shoppers on the hunt for a new boat to suit both the family and the fisho.

For more information on the Horizon Aluminium Boats range and to find your nearest dealer, visit horizonboats.com.au and to learn more about Yamaha’s ever-evolving outboards, head to yamaha-motor.com.au

Daniel is BNB's subeditor and occasional fish-wrangler. If you've got a great story or at least an idea for one, flick Dan an email at editorial@bnbfishing.com.au
Previous Stronger fisheries laws aim to combat seafood black market
Next Whopper whiting on offer around Gold Coast