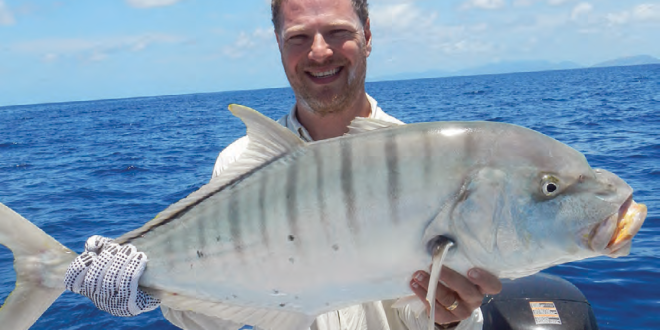 IT has really started to warm up around Hinchinbrook Island and the humidity has risen, with afternoon thunderstorms and evening showers. This is a definite sign that monsoon season is not far away.

The humid and hot conditions have really fired up the mangrove jack, and due to the barra closed season we have been targeting jacks and sooty grunter by casting lures around snags.

The good old 2.5” Lively Lures Mad Mullets have accounted for most of the fish.  A few large fingermark are being captured among the snags as well, which always adds to the excitement.

We’ve had some fantastic clients of late, with a lot doing their very first charter with us, and for most it’s the first time they’ve ever been lure fishing.  This is the reason I started guiding to see the expressions on the faces of clients who are relatively new to fishing. The expressions and antics that ensue when a big jack darts out of the snags and hits a lure hard as it heads for home are priceless. It is always a fun day.

Recently we had a charter with three generations of Smarts on board: Ken, Cameron and young Chris.  Chris had done very little fishing and had never caught a fish on a lure before but picked it up like a duck to water.

Sorry to make you hardcore jack fishers jealous, but Chris’s first fish was a jack about 46cm in length. He managed to catch another half a dozen, to the point where I was nick naming him Jack Slayer.  He outfished his dad and grandfather who tried to put him off his game a couple of times once by tangling Chris’s line around his and making him lose a fish, and Ken even hooked him in the cheek, but Chris managed to stay focused and outfish them both. Well done mate!

There is talk around town that the famous molasses jetty in Lucinda may be removed, which would be a tragedy for local land-based fishers as well as tourists.  Not only is it a great place to wet a line but also a fantastic spot to eat your fish and chips and look over at Hinchinbrook Island and the channel with an uninterrupted view.  If it is removed, let’s hope something else is built to replace it.

We have been doing a few bluewater charters mainly focusing on sport fishing. Our favourite technique is jigging for mackerel and trevally, and we’ve had fantastic fun catching awesome fish.  Good numbers of coral trout and redthroat emperor are around the reefs and spanish mackerel are still hanging there too.

It has been a fantastic season for spaniards, with both amateur and professional fishers having a great year.

If you are a serious jack angler or would love to do some jack fishing, December and January are excellent months to come to Hinchinbrook.  Jacks really get fired up, and with the barra closure there is hardly another boat in the channel, which makes the jack fishing even better because they are sensitive to outboard noise and boat wash.

A number of times I have been in the middle of a great jack bite when a boat has gone past and rolled wash onto the banks and the fish have instantly gone off the bite. 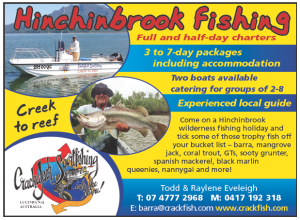 I hope Santa Claus is good to you and your stocking is filled with fishing lures and apparel instead of socks and un-dies.  Raylene and I wish you a Merry Christmas and Happy New Year.

Thank you for following our articles and we look forward to the new year, the opening of the barra season for 2015 and plenty of big fish.

As always, get to Hinchinbrook and Crack-a-jack

I look forward to talking to you again soon.
TODD EVELEIGH
Please comment below.