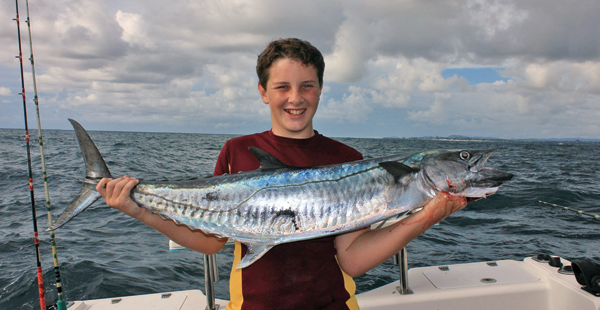 AS the weather cools, the fishing is really heating up, with mackerel arriving in good numbers right along the Gold Coast on all the local reefs. Some great spaniards up to nearly 18kg have been landed as have a lot of smaller fish to 9kg.

Live and dead baits such as slimies, yakkas and pike have all taken mackerel when trolled, as have hard-bodied lures. I prefer the deep-diving hard-bodies that get down to about 7m because I find these tend to get the fish, especially when a few boats are around as it seems the boat traffic sends the fish deep.

A number of horse live baits have been around, with 30cm slimies the average. These make sensational live baits because they are strong and can last all day in the water.

We made a trip out just before Easter and it was right on the money, with the weather and ocean conditions playing ball. A balmy, overcast day with a bit of swell running had us champing at the bit as we gathered our livies for the day’s fishing. The reef was packed with livies, which is always a good sign, and I made the call that I could “taste” the mackerel.

However it was about an hour before our first hit. With my rod buckling over, my impatience cost me as I dove on it way too early and pulled the hooks. While I was giving myself an uppercut, my old man’s rod screamed off and he was on.

The fish put up a good fight, including a lap of the boat, before being landed. A 15kg spaniard was a good start. The baits were reset and five minutes later my rod buckled and the Shimano TLD20 was screaming with another solid fish on the end. Its initial run was well over a hundred metres, which is an indication of a big fish.

As it came screaming back to the boat I called it for a big spaniard and was right on the money as a big thick fish started circling. After finally getting it alongside, the gaff was slipped in and number two was in the boat. Mitch’s line was still in the water and no sooner had the 16kg fish hit the deck than his rod began screaming with another big fish on the end.

Again a long and hard first run was followed by a run straight at the boat in typical mackerel form. Mitch was stoked because it was his first really big fish on his TLD20.

As usual he fought it like a pro and had the fish alongside in double time before we lifted the 14.5kg spaniard into the boat. We were onto a hot bite, and it seemed like ages since our last good session. With a mess on the deck, we cleaned up and got everything right again.

My next bait didn’t even make it all the way out before it was hammered. Line poured off the reel as I pushed the lever to strike, leant back into the rod and came up tight. We were on again!

This fish was much smaller at 10kg, but at this size they are very lively, with the spaniard going from side to side several times.  When it tired we got a gaff shot and it was in the boat. We were running out of baits so decided to put a bait really close to the boat to see how close these fish would come.

The bait on Mitch’s rod was literally 3m out the back and it got monstered in about five minutes flat. The fish went deep at the start but those tell-tale head shakes gave it away as a mackerel and a 10kg fish was soon pulled alongside and into the boat.

With the morning still young and a great feed on board we called it quits and headed for home, leaving the fish on the chew. Like just about everything in life, those good days are the ones that make you forget all about the ordinary days on the water.

Over the Easter break the spotties turned up in huge numbers and these fish should hang around well into May or even June depending on the water temperature. I have not managed to give the spotties a good hit because we went away over the Easter break and camped on the mid-north NSW coast at Moonee Beach. The weather was very ordinary early, with 100mm of rain falling over the first two days, but luckily it soon cleared for two weeks of sensational weather.

Mud crabs were running after the rain, with the kids getting the adults a good feed of four to eight crabs each trip.

We had a visit from NSW Fisheries officers, which was unexpected, as someone who can’t count or doesn’t know the new rules for NSW must have made a complaint. I suppose having 17 traps stacked up may have had something to do with it, but with a group of about 30 people we were well within the regulations.

And I guess the tribe of 12 or more kids at a time dropping off and collecting pots probably did look out of place. Nevertheless, it was good to see Fisheries officers out and about over the Easter break and following up on reports, even though there was no need in our case.

I had hoped to land a beach jew on this trip with two weeks up my sleeve, but as I wrote this with two days to go it seemed I may have lucked out, unlike my mates JB and Brad who have been slaying the jew in the Seaway. I’ve tried every trick in the book and used fresh baits and livies, all to no avail.

However I did manage to get some tailor, which were cooked up for lunch while still fresh. The kids caught plenty of dart in the surf and flatties on yabbies off the banks in the creek. A number of XOS flathead lies have kept up our hopes of a big girl being landed before the trip’s end. Luderick have also been taking yabby baits on the rising tide. As far as I am concerned, Moonee ticks all the boxes with its proximity to the beach and surf.

There are plenty of things for everyone to do.

Heath has been fishing since the age of three and grew up fishing the mighty Georges and Hawkesbury rivers.
Previous Tips for late-season jew and threadfin
Next First yak-caught barra