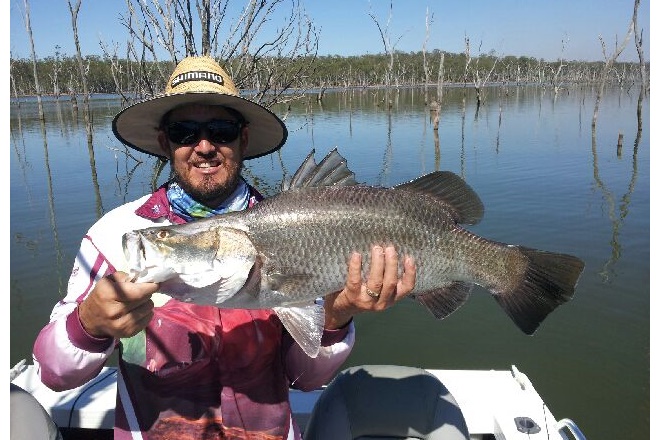 Lorne Stupart with a nice 74cm barra he caught at Lake Monduran this week.

Hot weather has fired up barra and jacks

Well, the start of the hot weather is certainly upon us in the Bundaberg area with some scorcher days this past week.  These have certainly fired up the mangrove jack in all the local rivers and creeks.

The Burnett River is still fishing very well.  Some nice grunter and bream have been caught on the gravel beds.  Estuary cod, summer whiting and big flathead are still in good numbers along the many rock walls and sand bars towards the mouth of the Burnett.  With the bigger tides some nice muddies have also showed up this week, so setting a few pots this weekend will definitely be worth a crack.

Anglers who have put in the effort were well rewarded with some fantastic summer whiting caught in the shallows around the sand bars.  Beach worms and fresh yabbies were by far the two best baits.  Some massive flathead have also been landed as by-catch fishing the same areas.  Further upstream trevally and mangrove jack have been quite active on lures and baits.

Firstly, we hope everyone stayed safe with the massive bush fires up around Deepwater National Park this past week.  Access to the northern side of the Baffle has been limited due to the fires, but anglers have still caught some nice mangrove jack up around the Ferry Crossing, flicking the many rock bars and snags up the top end of this awesome system.  A few boats have also put in at Winfield and fished the mouth, and have also been well-rewarded with some nice flathead, whiting and grunter. The Kolan system has also had its fair share of fish caught this week from whiting, grunter and flathead up around the black banks at the mouth, and some nice jack caught around the tram bridge and Yandaran Creek.

We haven’t mentioned Lake Gregory for some time but I can report that this small impoundment is fishing fantastic.  At this time of the year most of the bigger bass are up around the weed edges and are being caught on surface lures early in the morning.  As the day warms up anglers have been fishing sub-surface with spinner baits, vibes or Jackall TN60s.  Australia bass up to 50cm have been caught regularly on this awesome little impoundment.

The barramundi at Lake Monduran have still been very active with lots of barra around 76cm caught.  Unfortunately no one has landed the $15,000 Bundaberg Toyota Golden Barramundi yet, and with the warm northerly winds that are predicted the barra should be well and truly on the chew this weekend.