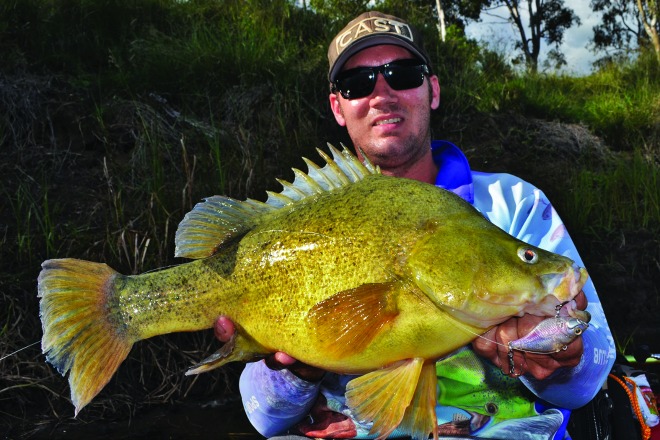 The author with a cracker fat yella. Getting these fish away from structure can be fun.

How to choose the right kayak for you

THOSE thinking about getting into kayak fishing are about to walk into a whole new ball game.

Those who already kayak fish know how peaceful and majestic it can be on the water. Well at times anyway!

I knew the basics when I started out, which still worked for the fish I was chasing. Since then I’ve moved to spending longer days on the water and travelling in excess of 20km a session. It has become a passion and an addiction that deserves to be passed on.

The three main factors I think about when choosing the right kayak are: how much gear I’ll use (including sounders, cameras, food and water); where I will be fishing (offshore, estuary, lakes and dams or skinny creeks involving constant rock hopping); and how comfortable the kayak is.

If you’re uncomfortable your time on the water makes you frustrated, meaning you can’t concentrate on fishing. A kayak that suits your needs will allow you to better focus on the fishing. In this article I will talk more about freshwater rivers and dams and fishing for bass and yellowbelly.

The freshwater fishing in southeast Queensland has slowed since the 2011 foods, and we are having to work harder for the better fish and put in more hours for those unforgettable sessions. So let’s break down the ‘where, when and why’ of how to catch a few freshwater sportfish.

In both lakes and rivers, existing structure always presents a prime ‘go to’ area. This structure usually consists of old river beds, creek mouths, holes, rapids and so on. The secondary things I look for are submerged timber, drop-offs, overhanging trees and so on. These areas can all fish well, with one being better in one season, time of day or moon phase than another.

Working out when the fish will fire will depend on where you’re fishing.  As a rule of thumb, I fish deeper during the day and more shallowly around sunrise and sunset and into the night.

The season will determine where the fish will be. During winter fish predominantly school in the lakes. In spring and autumn the rivers can fire, so sneak away in your kayak and find a quiet area in which to throw some topwater lures or even vibes in the deeper areas.

Find those prime areas and fish them with a variety of lures and you’ll soon work out a pattern. I’ve found it a little tricky to work out the best time of year to fish for yellowbelly. Regardless, a few have been around lately.

I mainly fish the lakes for these nuggets and work the main river channels and steep drop-offs with vibes such as the River2Sea Phantom and Fish Candy Curlyvibe. Spinnerbaits and deep divers in the 2-3m range work well too.

Once you find the fish, try to work out why they’re there. Reasons can include the presence of bait, spawning, structure, time of day, water flow and current, amongst many more, or a combination of these.

For example, just before sunset in the creeks and rivers, bait will often rise to the surface and then be pushed down through rapids (time of day, bait and structure).

As with most forms of fishing, sunrise and sunset are prime times to catch fish, but we can’t always fish those times due to restrictions on our waterways. Moon rise and fall as well as moon phase can also play a big part in fish activity. Not everyone can fish all the time, but try to plan your trips around the full and new moons and sunrise and sunset. The more you fish during peak times, the better chance you’ll have.

My basic essentials are a waterproof digital camera or DSLR, Esky with food and water to last the entire trip, a small first-aid kit, toilet paper (better safe than sorry), sounder, tackle back device and sun screen. This is in addition to the obligatory leader, lures, scissors, rods and reels.

Some people prefer a shorter rod for kayak fishing but I don’t mind rods up to 7’ in length.

I feel a landing net is a must because it makes landing a fish that much easier and also allows you to leave the fish in the net in the water while you sort out pliers, tags, camera and so on.

Being on the kayak isn’t always about fishing. The tranquility and scenery can be breathtaking. Watching the fog roll over the hills and across the water just puts you into relaxation mode.

People often ask me why I don’t just buy a boat or why I spend all day on the water, and I don’t have a simple answer. You need to experience it for yourself!

@@BNBFishingMag
Previous Are spacer lift kits legal in Australia?
Next Which anchor should you use?