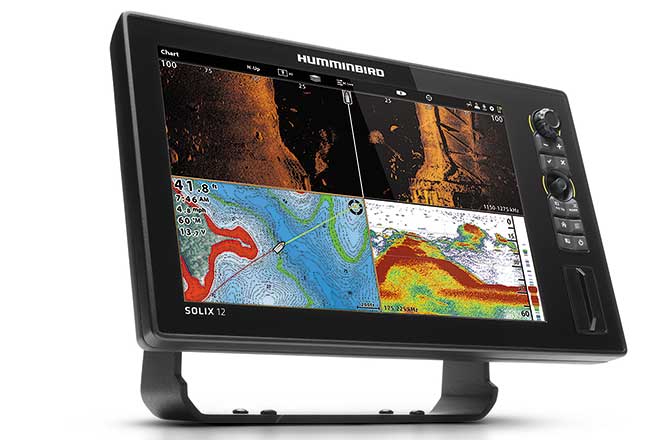 The biggest news in fishfinding sonar for 2017 is, quite literally, ‘big’.  For decades, Humminbird has led the fishing world by putting new tools and innovations in the hands of anglers to help them find and catch fish.  Now, Humminbird has combined its best features and placed them into one fishfinder, the SOLIX.

Offering the biggest display in the brand’s history – up to 15” – the SOLIX boasts technologies designed to make locating fish easier. A truly revolutionary product, SOLIX delivers game-changing sonar, imaging and mapping capabilities in the largest fishfinder Humminbird anglers have ever seen. In true Humminbird fashion, these technologies are packaged in an easy-to-use interface and system that can make any angler better.

SOLIX is setting the bar for the angling sonar category in display size with two variations of 12” and 15” screen models. Both come standard with Humminbird’s Cross Touch Interface, letting anglers operate the unit via touchscreen or keypad, all while customising the screen with up to four independent viewing panes. Cross Touch allows anglers to use the SOLIX either as a touchscreen or with the keypad for easier control in rough water conditions.

Individual panes can be zoomed or moved to different screen locations based on angler preference or fishing situation. Never-before-seen image clarity
SOLIX units come in two versions. One is equipped with GPS and CHIRP Digital Sonar, the other adds Humminbird’s game-changing MEGA Imaging. This is the first Down and Side Imaging technology to enter the megahertz range with performance that’s nearly three times greater than traditional 455kHz frequencies.

It results in the clearest, sharpest imaging returns ever. Anglers can choose MEGA Side Imaging for an incredible view to the left and right of their boat, while MEGA Down Imaging gives crystal-clear pictures of what is beneath the boat. Both carry a range that covers the most popular fishing depths. When asked to explain MEGA Imaging, Humminbird product manager Shaun Clancy said, “The screen detail is so defined that in some cases you can literally see individual fish and make out their head or tail in the sonar shadow.”

“Natural bottom structures including rocks and stumps almost look like photographs, while man-made structures such as shipwrecks, road grades or sunken bridges offer up imagery down to the individual beam. “After people see it, they just can’t believe it.” All SOLIX models include CHIRP Digital Sonar, firing more pulses than traditional transducers over a given period. More pulses means more information, improved target separation and superior image clarity at greater depths.

The next generation in mapping

Also standard on all SOLIX models is Humminbird’s expanded AUTOCHART Live technology that creates and saves structure maps on any body of water.
AUTOCHART Live identifies and maps depth, bottom hardness and vegetation. Anglers know that fish relate to depth, weed lines and transition points in bottom type – for example where a soft, muddy bottom transitions to firm sand or rock.

By collecting all that data on an AUTOCHART Live map, Humminbird helps anglers keep their boat in the strike zone on productive structure. Fishing takes another huge step forward when AUTOCHART Live is used in conjunction with i-Pilot Link from Minn Kota. With both technologies co-operating, anglers can tell their Minn Kota trolling motor to ‘follow’ a specific AUTOCHART Live contour at a set speed, and with the press of a button the boat will precisely follow the exact path.

Now, anglers no longer need to guess where fish-holding structure is located. They can precisely follow the weed line, bottom hardness or depth contour and stay within easy casting distance of their target.

Bluetooth is built into every unit, allowing anglers to sync smartphones to the on-board SOLIX. Text messages, missed calls, signal strength and other notifications appear right on the Humminbird display, so phones can stay safely in pockets where they belong for hands-free fishing. It creates a flawless on-board network of electronics and connectivity.

SOLIX owners can mount their large Cross Touch screens inside the boat dash, on the included gimbal or directly to an optional RAM mount for multi-directional viewing.
Humminbird R&D director Mark Gibson said, “SOLIX is the combination of decades of dedicated development in everything from the transducer to the touchscreen.”
“It’s the best of the best and the most advanced fish locator ever created.”