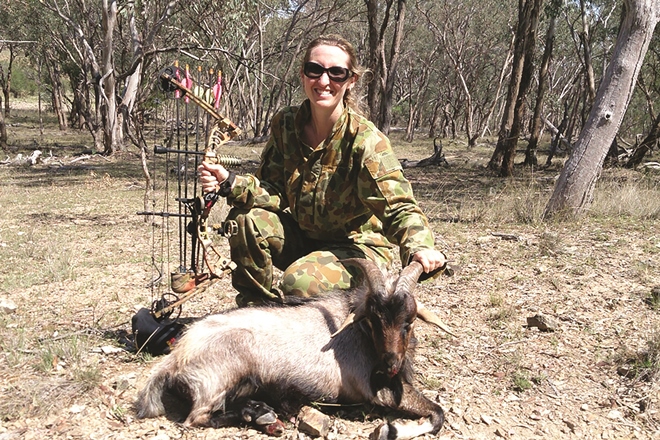 The author was as proud as pie.

LATE last year we went on a camping and hunting trip to Stanthorpe.

Unfortunately, we chose go during a 38C heat wave. But there was method to our madness because it worked in with the production schedule here at BNB HQ and also suited my partner Glen’s work hours.

I have owned my bow for about two years and Glen and I occasionally practise shooting at a target in the in-laws’ backyard. I pull about 30lb on my Apex Blizzard bow, with good groupings. Though after three to four rounds or sessions I usually start shaking and then finish up.

At Easter last year we went hunting at Stanthorpe but I didn’t take the bow with me on hikes because in all honestly I was struggling just to keep up. Being unfit, a slow walker and wearing boots from hell that made my feet feel like they were on fire meant I was always going to struggle. This time around we bought new hiking shoes and they were fantastic.

We arrived at Stanthorpe about 8.30am and Glen started unpacking while I began putting on the camo gear. My thoughts were: ‘we can always unpack later with a beer, let’s get out there!’ So we went on a two-hour hike where Glen took down two billy goats with his PSE Drive bow and I lost an arrow. The rest of the day was spent under a tarp, with no breeze, sucking on a beer can. It was still scorching at 4pm but we decided to drive to an area where Glen had previously shot a fallow deer. Unfortunately we didn’t see anything in the last hour of light while it was cooler. Then we strapped on the spotlight and drove around the property for two hours, seeing a lot of kangaroos, some rabbits and four deer.

The next day we were up early because that is the best hunting time and I was determined to go home with a successful hunting story. We walked into the wind to the creek bed where we found a couple of goats. Brilliant. Just two goats meant not too many eyes to see me, and the situation enabled me to sneak up on them with the right wind and good coverage.

I could see one cream-coloured shaggy goat and closed to about 50m before I ran out of coverage. The goat was over the hill and if I knelt down it couldn’t see me, so I decided to army

crawl over the dirt to get closer because I guessed 30m was my maximum distance for a decent kill shot. As I raised my head I saw movement and suddenly realised there were three goats. I couldn’t get any closer and decided to slowly stand up while the goats were looking away. An arrow was already ‘loaded’ in my bow and the only movement I needed to make was to draw back.

Before I could however, the cream-coloured shaggy goat looked straight at me. I thought: ‘oh no, it’s seen me,’ but I remained perfectly still and the goat finally started walking away. With the animal’s attention away from me, I had the opportunity to shoot but I was not going home with a Texas heart shot hunting story. The black and white billy then turned side on, with its head facing slightly away. This presented the exact shot Glen had told me to take, so I pulled back the bow, aimed and pressed the trigger. When practising, as soon as you hit the trigger you know if it is a good shot or a misfire. And in this case I knew immediately it was a bullseye.

The three goats took off running and I (intently) watched my arrow and billy goat run about 50m and over a small hill before I couldn’t see it anymore. We started walking after the goat and while I wanted to walk towards where I saw it go, Glen told me I should always follow the blood trail. Glen had shown me this trick at Easter but I get impatient and want to run ahead. However it can sometimes be nearly impossible to find a dead animal without trailing it.

About 20m along the trail, we found the arrow. At the top of the ridge, another 40m along, we saw two of the goats staring ahead at something. Looking in the same direction we spotted a strange shape against a log. The billy had died leaning against a large log and just happened to be resting in a position perfect for taking pictures. I was intensely proud of hitting the mark and pleased my years of practising had paid off. We took some photos and kept moving.

Soon we came across three more goats with three trees between us and them. I stalked up to 20m before one of the goats whipped its head around to stare at me for 60 seconds. Getting cocky and with the animal showing me its side, as soon as its head went down I pulled back the bow. The goat immediately saw my movement and all three bolted. The rest of the camping trip involved about nine hours of trying to keep out of the heat, swimming in leech-infested creeks and midday naps. Night-time is perfect for spotlighting while driving around the property, and doing so we got six bunnies (with a gun).

Once home, Glen made ‘rabbit nuggets’ with a seasoned coating, similar to KFC chicken, and quick fried them in oil, which was amazing! On the final morning Glen went hunting solo while I stayed at camp for a sleep in. He took a couple of shots at a deer and a rabbit but missed both before finding the mark and taking down a boar. I think I have a while to go before shooting a deer, rabbit or pig, but I’m going to enjoy the challenge.