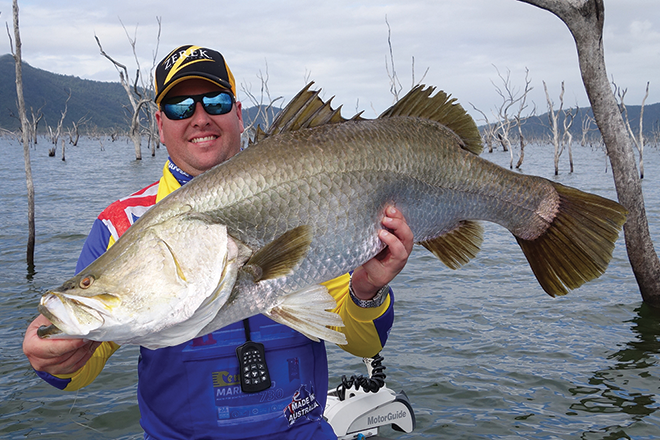 Nick Wells with a 115cm Peter Faust barra taken in the timber on the Fat Betty Zerek Fish Trap. A Stocked Impoundment Permit is required to fish Peter Faust Dam.

THE late spring impoundment barra scene got off to a slower start than usual this year, with some very inclement and unusual weather patterns keeping the sun behind the clouds, wind up and water temps down.

A couple of comps featuring a number of the best anglers in the country showed just how tough the fishing was when they struggled to achieve results. It had some of the best in the business shaking their heads. The Barra Nation JML Anglers Alliance Proserpine Scrimmage was the first big event to start off what we like to call the impoundment barra season.

The 15-hour all-nighter event held at Peter Faust Dam in August was set to put even the toughest competitors to the test in trying conditions.
And that it did! It was somewhat different to the conditions and fishing experienced in August 2015. The week leading up to the event saw a few anglers pre-fishing in less than suitable conditions.

On and off rainfall and cold wind up to 30 knots left most of us looking for answers. Plenty of fish were showing up on our Lowrance sounder but they were reluctant to bite. Come comp day, it bucketed down and things weren’t looking great. The only good thing was the wind had dropped out. With the best barra anglers in the country about to lock horns, the rain died off just before launching and the clouds thinned out just in time for take-off.

With very mixed bags coming in the following morning, Team Triton/Edge Rods of Rick Napier and Dustin Sippel took out the event, boating a very impressive nine-fish bag.They were followed by Craig Griffiths and Karim De Ridder in second and Jon Millard and Ethan Farrell in third. It was a great event run by Drew and Lauren from B.A.S.S. Australia Nation.

The days after the comp saw better weather and the dam produced quality fish on Zerek Fish Traps and Flat Shads around points in the timber. The Peter Faust Dam Fish Stocking Association recently ran its annual Jack Erskine memorial event and it was very tough for many, with a lot of empty spaces on the scoreboard.

Peter Price and Kev Greer made up the champion team and Craig Griffiths was the champion angler, fishing alongside Karim De Ridder. From what we have heard, the fish were very patchy and the anglers who put in the hard yards to find the fish reaped the rewards.

The weeks after the event saw the fishing turn around and the impoundment barra come right on the chew. Young Damien Mills from Tamworth stayed for a week at Faust and was straight into the action with his first barra going 106cm after it inhaled a Zerek Flat Shad. With Damien was his good mate David Masters, who upgraded his PB with a cracking 115cm barra also taken on a Flat Shad. With the fish still a little timid coming out of a tough bite, it was tricky to set the hooks on several fish but they persevered and came up with the goods.

Hot new barra gear
Once again, it’s that time of year when all that mouth-watering fishing gear from the Australian Fishing Trade Association Trade Show starts showing up in shops and eventually in your tackle box. Wilson Fishing has again stayed ahead of the rest in design and innovation, with hot new gear on the market for every angler.

From the range of tackle storage to clothing and new Zerek lures and Venom rods, it’s enough to get everyone excited.

Bigger Zerek Tango Shads
The Zerek Tango Shad now comes in 69mm and 89mm to complement its smaller 50mm counterpart which has made headlines across the country in the past couple of years, especially on the flathead circuit. The two new sizes were introduced to cover a larger species base and increase options for anglers. With a range of awesome colours perfect for targeting impoundment barra and other larger predatory fish, they also come in either suspending or floating styles, which is a big thing these days. These new lures come straight out of the box with Mustad 4X Saltism trebles for added security.

Zerek Speed Donkey
Aptly named, the Speed Donkey was designed with high-speed trolling in mind and to attract ‘donkey’ sized fish at speed. The Speed Donkey is also a great casting lure and has a fast, tight action when cranked through the water emitting its unique high and low-pitch rattle system. This lure is 140mm long and weighs 39g, with a through-wire construction for those big unstoppable brutes of the deep.

It can be trolled at speeds of up to 15 knots, which is very fast for a 140mm lure. The Speed Donkey achieves this speed through its unique bib and body design. All Donkeys are fitted with super-strong Mustad trebles and super-strong split rings to make sure that fish of a lifetime doesn’t get away without a few happy snaps.

The Speed Donkey is available in 15 colours and there’s one for every angler and every species.
For any further information regarding this month’s article or any previous, please give us a like and contact us via our Wells Brothers Fishing – Official Facebook page.

To find out more about the great new gear from Wilson Fishing and Zerek, jump onto wilsonfishing.com.au
The Wilson website has just undergone a major revamp and now features all the info on the best fishing gear in Australia.