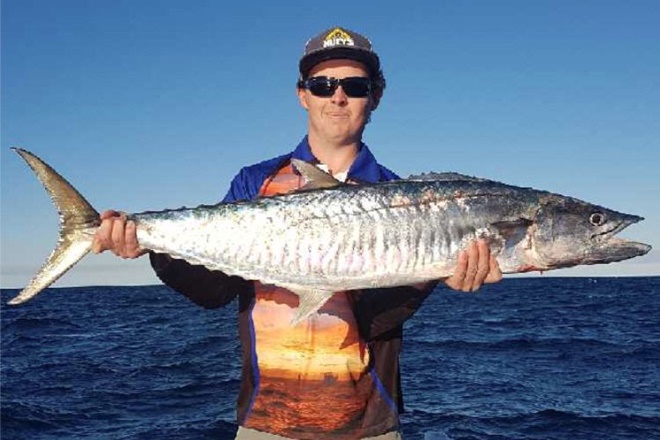 Inshore reefs to fire up off Bundaberg

The offshore forecast for the Bundaberg area for the weekend isn’t looking the best, although it looks like there might be a couple small windows.  Early morning Saturday and late Sunday afternoon are looking the best.  There’s been awesome numbers of cobia, snapper, and bar-cheeked trout caught offshore over the last couple weeks, so fingers crossed we can get out again soon.

With the full moon falling on Friday night the inshore reefs should fire up!  The snapper and grunter should be on the chew.  There is lots of bait already stacked up on the Four Mile, the Cochrane Artificial and the Two Mile reefs, making this prime for the snapper and grunter to be there.  Pilchards, squid, and fresh flesh will be the ideal bait. If you’re in the lure game, It’s hard to beat the Samaki 20g Vibes and 5 inch Zman plastics to make them bite.  Also, there’s been a few solid Spanish mackerel roaming around.  It’s always a good idea to have a live bait set behind the boat while snapper fishing.  Keeping a squid jig ready on a rod this weekend wouldn’t be a silly idea either, as there has been a few large squid about.  It’s a prime time this weekend for them with the full moon, cool water and clear water, and that’s three things the big squid love.

The Burnett is still fishing very well, with the flathead and grunter being the standout catches.  They were mostly caught on soft vibe lures and live sprat.  The Town Reach around the bridges seems to be the hot spot.  The bream seem to be still in good numbers on most major rock walls and with the full moon being Friday night there should be some hot bites.  Not to forget about the big schools of blue salmon still in the river in the deeper holes.  A soft vibe lure will also be the most effective way to target them.  Rumour still has it that there are a few mud crabs and prawns about, so it may be worth dusting off the pots or cast net and giving it a crack.

We have also seen Baffle Creek and the Kolan River fire up, with good reports of flathead, grunter, bream, whiting and queenfish being caught.  The mouths have been holding most the fish.  Using small prawns and beach worms have been the most effective ways to catch the bream and whiting. Throwing poppers and stick baits at the mouths for queenfish and little GT’s is always exciting!

The Elliot River will be well worth a go if you’re chasing whiting this weekend!  Fishing the big afternoon full moon tides will be the go.  Using prawns, beach worms or fresh yabbies will be the best baits.  It’s pretty hard to beat a relaxing afternoon down there with crystal clear water catching a fresh feed of whiting as the sun sets.

With the full moon being Friday night there should be some Barra action!  There’s northerly winds forecast so it should warm things up a little.  Samaki Soft Vibes and Jackal Squirrels should be the go to lures.  I’d aim for the afternoon/night bite after the northerly winds have been blowing all day to warm things up.  The moon will rise at 5:44pm Saturday night which could stir up a bit!