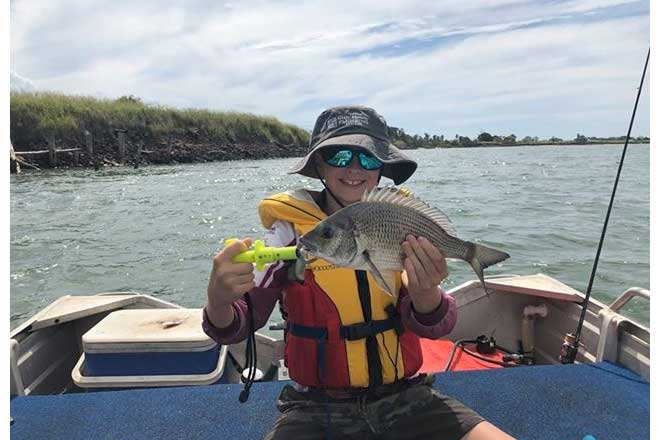 Rylee Mears with the 35cm bream she caught in the Burnett River over the school holidays.

The forecast for the Bundaberg area for Saturday is looking perfect at this point in time, but as always, check the latest forecast before heading out.  With the bigger tides there should be some awesome fishing in the shallows.  Drifting over shallow patches with small weighted ball sinkers is a deadly way to smack the red throat emperor and coral trout.  Concentrate on the tops and bottoms of the tides when chasing the reds in the deeper water.  When targeting these species, I have been using Elkat ganged hooks for over a year now and they sure seem to give you good results.

The inshore reefs and more close areas should be firing around Bundaberg this weekend! It’s that time of year when all the bait comes in close and all the big Spanish mackerel come in and let loose.  Fishing with lightly weighted pilchards and a live bait floated out the back is by far the most effective technique.  Don’t forget to vertically pull Flasha spoons off the bottom because there are plenty of schoolies getting around.  It will also be well worth doing some bottom fishing because there are some trophy sized grunter and good-sized squire getting around.

The Burnett has been fishing well as always.  A few guys are getting into some late season barramundi.  Fishing the rock bars with soft vibes towards the middle of the day when the water is at its hottest has been the standout bite time.  Also, there has been some cracker bream being caught!  Fishing in the Town Reach with Z-Man Grubz or anchoring up and fishing with prawns on the change of tide has been the go. Don’t forget to throw the crab pots in because they will be on the move with the new moon tides

The Kolan River and Baffle Creek have been producing the goods.  There has been some awesome-sized mangrove jack being caught in both systems.  Fishing the outgoing tides with 3” Z-Man and 4” Z-Man plastics has been the way to go.  Also, live-baiting has been smacking them too.  The queenfish are still in good numbers towards the mouths so don’t forget to throw a small popper on and have a crack at them.  The whiting will be on this weekend.  I’d be pumping yabbies at low tide in the afternoons and fishing the incoming tide into the evening.

Lake Monduran is still fishing very well.  Tim and I fished up there a couple afternoons last week and the standout lures for me were Jackall Squirrels.  We got most bites fishing the timber very late in the afternoons.  I found that very aggressive twitches with long pauses was the technique the barramundi were most likely to strike.  I would definitely lean towards fishing the afternoons because that’s when the water temperature will be a couple degrees higher.