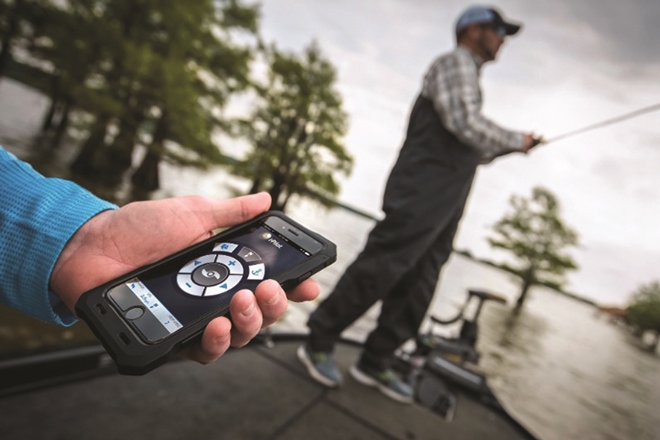 The free apps allow anglers to navigate and control their trolling motor via their smartphones or other mobile devices by communicating with the trolling motor through Bluetooth. They also allow users to accept software upgrades wherever they have data coverage. Minn Kota product manager Shaun Clancy said, “Our goal is always to help anglers catch more fish, and precise boat control is critical to success. The new Minn Kota apps help make that easier than ever. From setting speed and direction to activating Spot-Lock and our new Spot-Lock Jog feature, we are putting a host of features into the familiar, convenient interface of phones and tablets.”

Minn Kota talked to avid anglers and loaded the new apps with the commands they use most on the water. They include basic Propeller On/Off, Left/Right Steering, Speed Control, AutoPilot activation, and deployment of Spot-Lock and Spot-Lock Jog – which keep anglers glued to a spot even in high winds and strong current. The apps also offer a High-Speed Bypass feature, which immediately boosts the motor to high speed if the angler needs to move the boat quickly.

Activate software updates on the water

Since Minn Kota is continually expanding and evolving its technology, there are times when software updates become available. With the new apps, anglers are alerted that an update has been released. They can then activate that upgrade, even while they’re out on the water fishing. “Since integrating Bluetooth into select Minn Kota models, it has opened up a new frontier on upgrades and functionality,” Clancy said. “On-the-fly software updating is just one of many benefits.

The Minn Kota apps for i-Pilot and i-Pilot Link feature an easy-to-use screen layout designed to mimic Minn Kota’s handheld remotes that anglers are already accustomed to. The navigational icons are the same, and the response time is immediate. Some anglers have reported using the app as their primary control or as a back-up to their wireless remote. Still others enjoy using their foot pedal for control. Ultimately it comes down to angler preference, and Minn Kota delivers options for anglers to choose how they control their trolling motor.