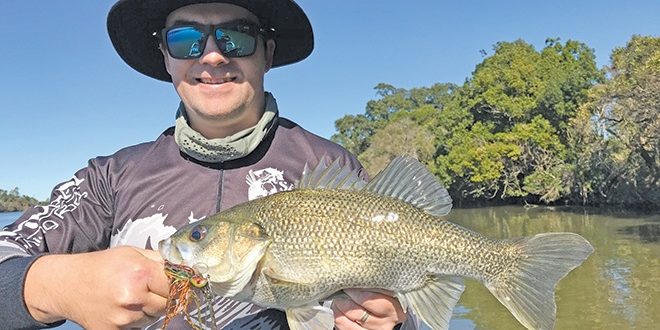 Bill with a nice bass.

The hardest thing to do at this time is decide what I’m going to spend my day chasing after when I’m out on the water. As far as offshore fishing goes this year, it hasn’t been a normal winter period as such. Normally, I would expect the current to have dropped off to nearly nothing and we would have an early morning westerly wind and calm days. Goldilocks Northern Rivers

However, this year the current has continued to run fairly quickly on the wider grounds, and this has made fishing these areas difficult indeed. It does concern me a little that come summer the current may be running harder than normal, and it may also mean that our summer offshore fishing may kick in a little earlier than normal. But I guess only time will tell with both of these hunches. Goldilocks Northern Rivers

In contrast to the wider reefs, the 32-fathom lines and close reefs have been quite fishable, and we have seen quality snapper from both of these areas. Lightly weighted soft plastics and vibes have worked quite well at Riordans Reef and at Black Head over the past month. Brighter colours seem to be having a better response early in the morning, but as the sun comes up more natural colours have also accounted for a number of fish. Goldilocks Northern Rivers

There have been plenty of live bait on the close reefs lately and most of them have been rather large. The mulloway that have been caught in close have been more than happy to take this large live bait. The strong current out wide has meant good numbers of school-sized kingfish out on the 42s and 48s, and this current also seems to have pushed pearl perch in a little closer, with quality fish being taken on both bait and jigs on the 32-fathom line. Goldilocks Northern Rivers

With the water temperature already hovering around the 20C mark and the strong current out wide, it may not be too long before we start to see mahi mahi and marlin cruising around.