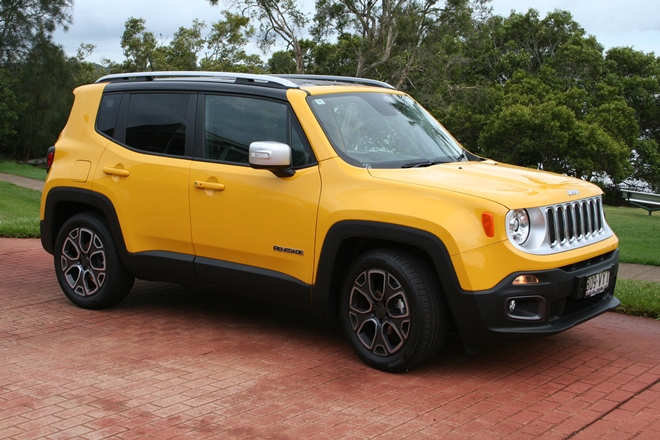 Unique styling that clearly differentiates the Renegade from its main rivals was a smart choice by Jeep and the car really stands out on the road, especially in Solar Yellow.

THE all-new Jeep Renegade certainly provides a shock to the SUV marketplace, particularly in the Solar Yellow duco of the test car I recently picked up from Cricks Mt Gravatt.

In fact the entire colour palette available for the Renegade gives you an idea of what Jeep was thinking when it conceptualised the baby SUV, with several vibrant hues on offer such as orange, blue, red and of course yellow; colours often reserved for trendy city runabouts or ‘jelly bean cars’. If you haven’t yet seen or heard about the Jeep Renegade, I’m sure you soon will as I anticipate it selling strongly in our SUV-obsessed new car market.

Four trim levels kick off with the base Sport, then kit increases in the Longitude, again in the Limited and the range tops out with the four-wheel-drive Trailhawk. The Sport manual features a 1.6-litre E-torQ four-cylinder motor mated to a five-speed box and front-wheel-drive, though all models except Trailhawk are offered with a front-wheel-drive powertrain consisting of a tiny but angry 1.4-litre MultiAir four-cylinder engine fed by an equally small and feisty turbocharger. This is paired with a six-speed DDCT dual-clutch automatic transmission for rapid and responsive gear changes as well as excellent fuel economy. Power and torque are unchanged in all models with this drivetrain, so 103kW and 230Nm are the numbers you have to play with.

While this might not sound like much (well, it isn’t), the way in which the Renegade delivers the figures on the road means the engine is never lacking in urgency. This fact is helped by a relatively light tare mass of 1295kg. The Trailhawk is as mentioned the solo 4WD model in the line-up and its oily bits comprise a 2.4-litre Tigershark four-cylinder motor churning out 129kW and 230Nm paired to a nine-speed auto box. With a gamut of impressive features off-road enthusiasts will love such as a proper low-range 4WD system, hill descent control, underbody skid plates and more, the Trailhawk definitely takes the fight to its opponents in the undersized 4×4 arena. Unfortunately the Trailhawk was yet to arrive Down Under at the time of my test, but by all overseas accounts it is terrifically capable off-road.

So with no Trailhawk available I was given the key to a Solar Yellow Limited Renegade. This car really stood out from the crowd of other Jeeps on the lot and the bright yellow hue accentuated the Renegade’s boxy lines and almost cubic body shape. It’s not a big car at just 4.25m long, 1.8m wide and 1.66m high, with a relatively low-slung ‘chin’ jutting out from the front bar.

Jumping inside after opening the door using the Limited’s ‘smart’ proximity key (leave the key in your pocket and place your hand over the door handle and it will unlock), I found myself feeling at home. The previous two Jeeps I’ve tested (Grand Cherokee and Cherokee) featured a very similar interior layout, steering wheel, TFT instrument cluster and Uconnect infotainment system, but the Renegade changed things up a little with hexagons and other multi-angled shapes everywhere. All the (nine) BeatsAudio speaker boxes, cup holders, air vents, shifter surround and much more received the squared-off treatment, as did a number of external features.

With starter button pressed and the engine running, my phone seamlessly paired to the 6.5” Uconnect multimedia system and the dual-zone climate control air-conditioning cranked to minimum temperature and maximum fan speed thanks to the 33C ambient air temp, I shifted to D and cruised out of the Cricks yard. Initial driving impressions were good and the dual-clutch transmission was happy to glide off smoothly from a stop, with none of the jerkiness other dual clutches can suffer from in low-speed traffic. This smoothness unnerved me on a few occasions over the course of my three-day test and it almost seemed as if the transmission was deliberately slipping a clutch in order to get away cleanly, which resulted in slightly tardy movement off the line without a decent stab of accelerator. All-round vision was acceptable, though thick A-pillars and a sporting driving position meant there were a couple of blind spots, something that is almost unavoidable when a car is crammed with seven airbags.

Once on the road I appreciated the relatively firm but well-damped and quiet ride on the 18” wheels shod with 225/55 R18 Bridgestones, with the Renegade whisking me along in near-silent comfort. The first few corners surprised me somewhat as I wasn’t expecting the car to handle as well as it did. Some spirited driving with four people on board later that day revealed the chassis to be quite capable through the twisties and in manual mode the DDCT transmission was responsive and the ratios well suited to the 1.4-litre engine’s punchy torque curve. Four adults in the car did little to dampen the diminutive four pot’s character and strength in the low to mid-RPM range. Winding out the engine revealed there wasn’t much going on power wise as the tacho needle swung past 5500rpm towards the cool ‘mud-splashed’ redline at 6500rpm. But keep the engine in its sweet spot from 2500-5000rpm and you’ll get from A to B in a fairly swift fashion while the engine and DDCT work together to make some entertaining noises, particularly on downshifts into corners.


Through all this the very adjustable and comfortable leather seats were quite supportive and after an hour of driving I stepped out feeling fresh. There is very little not to like about the Renegade, though the rear seats, similar to the Cherokee, were labelled as a bit uncomfortable by my passengers and legroom in the front passenger and driver footwells was a bit cramped due to what seems to be a consistent Jeep feature of a bulging centre stack. A footrest for the driver was a pleasing inclusion however. The nine-speaker Beats-Audio system was perfect for drowning out the parents on the journey and the clarity and crispness of sound even at higher volume levels has to be heard to be believed. As with the Cherokee and Grand Cherokee, most major functions can be taken care of on the steering wheel, such as answering and making phone calls, setting the cruise control, changing songs/stations and volume and switching what is displayed on the 7” colour instrument cluster.

Jo from the office (who currently drives a 1999 Suzuki Grand Vitara) was smitten with the Renegade and felt it was a seriously cool car, going so far as to say she’d happily buy one once prices had come down in the used market. I believe offering a lot of things for a lot of people is key to the Renegade’s unique and funky charm. This charm includes light-hearted design elements such as a tiny picture of an original 1941 Jeep on the windscreen, ‘To new adventures!’ inscribed around the engine start/stop button, contour lines in the recess below the centre stack and the grill and headlights of an original Jeep appearing throughout the cabin.

I had a bunch of fun playing with a great feature on the Jeep website where once an exterior colour had been chosen I could toggle between a variety of optional extras to see how they looked on the car. You can see how things including a four-bike hitch, roof basket, decals and more would look on your chosen model. Check it out at jeep.com.au/renegade

The Jeep Renegade’s broad appeal means it would make a sensible choice for anyone from younger, active buyers wishing to explore the great outdoors to parents whose kids have left the nest and they no longer need the seven seats of a big 4WD but still want something with presence on the road and versatility if they want to go off it (in Trailhawk guise at least). A 1.4-litre turbo Renegade should be quite thrifty too, with a claimed combined fuel consumption figure of just 5.9 litres per 100km. When I picked the car up with 500km on the clock it was averaging 9.7, but by the end of my tenure I’d lowered that to 9.2 litres per 100km, and as you may have guessed I wasn’t driving in a terribly economical fashion.

The best advice I can give you is to go to your local Jeep dealer and check the Renegade out in the metal. It’s a truly funky car and offers a colourful alternative to the myriad small SUVs on the market. For a closer look at the Jeep range, stop into Cricks Mt Gravatt at 1323 Logan Rd, Mt Gravatt or visit mtgravattjeep.com.au

Daniel is BNB's subeditor and occasional fish-wrangler. If you've got a great story or at least an idea for one, flick Dan an email at editorial@bnbfishing.com.au
Previous New Location For Australian Marine Windows
Next Ecooda Genius Baitcast Reel (Product News) 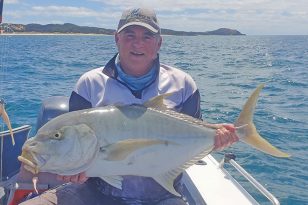 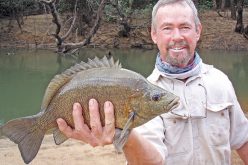 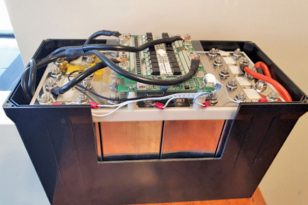 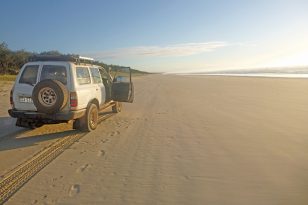 Hi, with September on its way, hopefully COVID is under control and we’re able to …