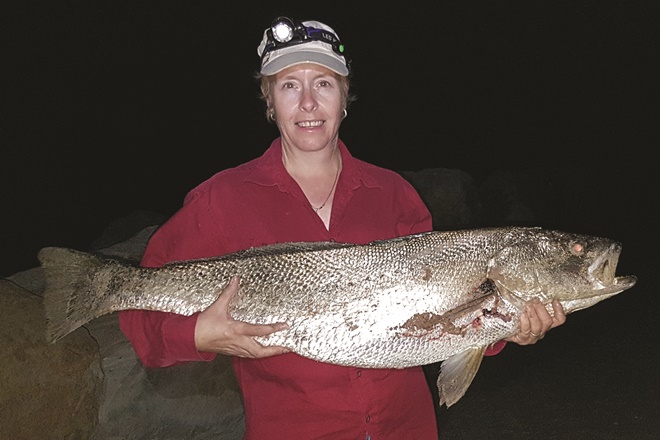 Gulmarrad angler Fran Dowsett kicked off her jewfishing career with this solid fish from the Yamba breakwall on a fresh squid bait.

JEWFISH and tailor dominated catches during June here in the Clarence Valley, which is to be expected.

I’ve been writing about it for 27 years now and it was happening long before Captain Cook touched down, so it amazes me the number of people still surprised by the yearly event that happens right along the coastline. Winter equals a lot of mullet, which in turn equals a lot of jewfish that eat mullet, simple as that. Don’t think for a minute that this only happens on the Clarence River because the same thing is happening now to a lesser or greater extent on the Macleay, Evans, Richmond, Brunswick and Tweed rivers and wherever else you find flat-tail mullet.

Sorry to be a tad sarcastic but I have always had a low tolerance for ignorance and laziness, so here ends my bitch for the month.

Those anglers not sitting at home waiting to be told where the fish are biting have been out and about in stealth mode landing plenty of nice jewfish on a mixture of baits ranging from the humble mullet fillet to whole and stripped squid, hard-bodied lures, soft plastics and of course live mullet. During the past month, jewfish of varying sizes were taken from Harwood Bridge downstream to the mouth, on both the Yamba and Iluka breakwalls and the majority of beaches and headlands in the area.

No, not every spot produced fish every night because that just does not happen, however those anglers who have been successful have also been versatile in trying different spots with different baits and lures until they find a patch of fish, not sitting at home watching Facebook for outdated and second-hand news.

Main Beach at Iluka produced really nice tailor last month on bonito strips and whole garfish, with 2-4kg choppers the norm. As long as the shoals of whitebait keep hanging around, anglers should continue to enjoy quality fishing throughout July, so here’s hoping for very few big ground swells and high wind.

I am yet to fish for jew this year, however my offsider Ted McLean and I have plans to fish spots X, Y and Z in the near future, even though the closest we have come so far is sitting on our respective lounges eating alphabet soup. The beaches and headlands are starting to produce healthy numbers of solid bream and tarwhine.

Inside the river, bream are slowly building in numbers, with Turkeys Nest and Middle Wall the pick of the spots so far. Luderick have been missing in any number or size in the lower reaches of the Clarence River, with even the ever-reliable old ferry approach here at Iluka failing to produce numbers. Snapper and trag are keeping the offshore brigade amused, with reasonable catches reported, so here’s hoping July will be just as good.

All in all, there is no reason you won’t be able to get a good feed this month, as long as you remember to turn your phone off and actually go fishing. ‘Til next month, safe fishin’.