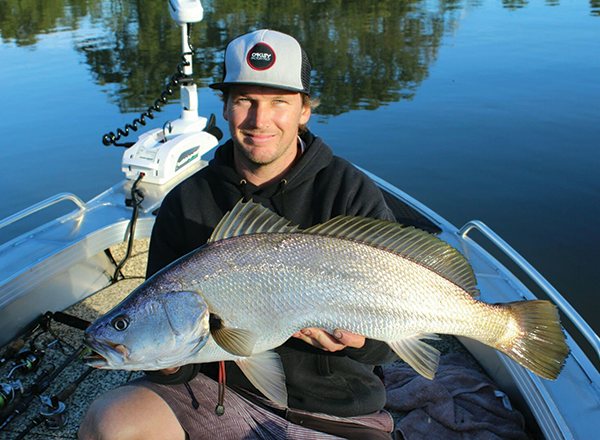 Jarryd Corney found this quality jewfish on his sounder before enticing it to eat his lure.

WINTER is finally upon us and with it comes a variety of new options for fishing southeast Queensland.

The days are shorter and the water temperature will drop dramatically. Towards the end of June, water temperatures may get below 15C in the smaller creeks. Species including flathead, bream, tailor, jewies and threadfin salmon really fire in these temperatures. The rivers and creeks around southeast Queensland are in good condition following the floods.

The baitfish have pushed back upstream and are widespread, giving anglers the option to target a variety of areas in search of hungry predators.
Big jewfish push a long way upstream in search of food during winter.  A good sounder can make it easy to locate these fish, which will normally be found in small numbers and even solo.

Finding these fish on the sounder first and then casting soft plastics, vibes or trolling hard-bodies is a great way to target them. It can be very challenging at times, but this can make it even more rewarding when a solid jewie smacks your lure. In the upper reaches of the local waterways, it’s possible to scan the entire width of the river with a side-scan feature on your sounder.

Setting the side scan on the shortest distance possible will give better clarity and show bait and fish as larger and more defined objects. Sometimes it can be very hard to get a bite from jewfish, depending on their mood. A lot of jewies will only feed for a short period.  One day they will be everywhere and feeding aggressively and the next day they can be gone or shut down.

It can be very difficult to get fish to bite when they don’t want to. If I find good numbers of fish that won’t bite, I’ll try a few different things before moving on. Changing lures can work well.

My go-to soft plastic is the Z-Man 3” MinnowZ.  This little plastic catches amazing numbers of big fish and will often be the first lure I throw at species including jewfish and threadfin salmon. On the days when the fish are fussy, I’ll change to a larger-profile paddle tail or prawn imitation such as the 3” ShrimpZ.  If these don’t get a bite, I’ll try a blade or soft vibe.

Another option worth trying is trolling hard-bodies through the fish. Trolling is often overlooked by many anglers, but it can get the bites when casting and jigging doesn’t work.

Flathead
Flathead will show up in big numbers in the local systems this month. The colder the water temperatures get, the harder they will bite, so the next couple of months are the time to chase these tasty treats. Flathead can be caught using a number of techniques. When they are feeding aggressively, they can be quite easy to capture.

Casting and vertically jigging soft plastics works well, as does trolling small diving hard-bodied lures. Drifting well-presented baits also does the trick on flathead. They like a moving target, so keeping your bait or lure moving will get you much better results. This is a perfect time of year to take the kids or a friend out to catch their first fish on a lure, and flathead are an excellent species on which to introduce anglers to lure fishing.

I really enjoy trolling small hard-bodies in winter. Flathead love eating these little things and it’s a perfect way to rack up large numbers of fish.
Kids tend to like trolling because it gives them something to watch and it normally doesn’t take too long to get a fish. It’s a great way to catch a variety of species and it’s not uncommon to land multiple species during a session.

Trolling sand flats limits the amount of by-catch you will come across. The occasional bream and whiting will turn up but flathead will be the most common fish you come across. I like trolling canals. The variety is amazing.

Bream, flathead, estuary cod, mangrove jack, trevally, moses perch, jewfish, tarpon and a stack of others regularly turn up when trolling small lures.
Light gear allows the lures to swim to their full potential. The only problem with using a light outfit is you will find yourself in a bit of trouble if a mangrove jack, big cod or solid jewie finds your offering too hard to pass up.

Occasionally a little bit of luck will come your way and the fish will find its way into the net, but on most occasions a decent jack will make short work of it. However, that’s all part of the fun. The best lure I’ve come across for this technique is the Lively Lures Micro Mullet. This small lure catches huge numbers of fish and I think most anglers have one or two in their arsenal.

Leader size depends on the country you are trolling. If it’s sand flats, you will get away with a 10-12lb leader. Occasionally a big fish will rub through a leader of this size during a prolonged battle, but it will handle most fish you come across.  June signals the start of a few months of great fishing in southeast Queensland.

Get out on the water and enjoy the action.
I hope to see you out there.