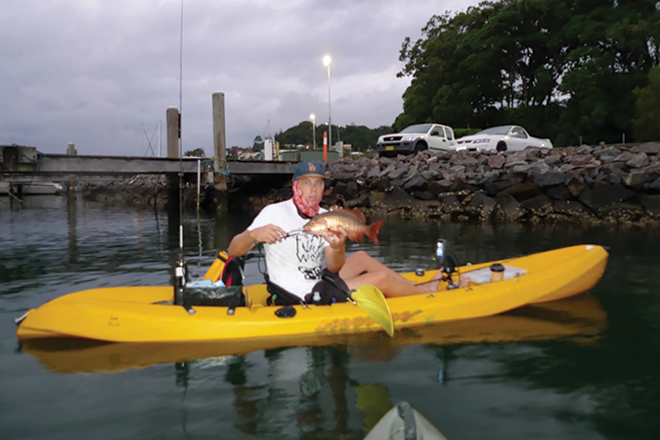 HI, my name is Jason Brindley and I am an experienced Gold Coast-based fisho.

For the past few summers we have been chasing the elusive Gold Coast mangrove jack in our river systems. Jacks are one of the most highly prized fish in our local estuaries; known both for their devilish looks and dogged fighting tactics.
To add to the challenge, we’ve been kayaking for jacks.

Kayaking for jacks has many advantages, not least the comparatively small cost of equipment. Yakking for jacks is more enjoyable than it is physical. Paddling through glassed-out water as the sun rises is an experience everyone should enjoy.

Add to that a doubled-over rod, locked-up drag and one of the hardest-fighting fish in the sea and your morning is made! The beauty of fishing from a kayak is it’s something most people can afford and means that getting on the water doesn’t have to mean a $30,000 boat and the latest Minn Kota electric motor.

In fact, you can catch jacks from a basic $200 kayak that doesn’t even have rod holders (just take a look at some of Ben Costello’s Jack Guide videos and you will see for yourself).

The humble paddle can get you right in there amongst the fish and into locations that, if you were in a boat, would require a small, stable boat with an electric motor. The other advantage is kayaks are quick to use and very quiet when sneaking around pontoons and rock bars. In saying that, a kayak with all the bells and whistles can set you back in excess of $2000.

I am a bit of a fishing gear fiend and have splashed out on what my mate Brad refers to as the ‘Mercedes-Benz’ of kayaks. I have a bit of an average back at times and wanted a seat that maximised comfort to ultimately allow for more time on the water. Whatever your budget, I would recommend picking up a yak in the 2.8-3.3m range because they’re better for this application.

Generally, you’re not covering big stretches of open water and you want to be able to sneak in and around obstacles as easily as possible. Nothing gets the blood pumping more than a rampaging jack and a locked-up drag. It’s their massive tail that seems to give them the power to rip line from your baitcaster, which usually results in a mild dose of heart failure as they dive for the nearest underwater structure.

Their power, combined with the presence of all types of underwater structure (natural and artificial), means your gear, tackle and knots need to be up to the challenge. My favourite setup at present is a 6’8” Dobyns 8-17lb rod coupled with a Shimano baitcaster. The length of the rod is perfect and the Shimano baitcasters seem more bulletproof on the kayak.

Your gear will cop a lot and I’ve had endless trouble with my Daiwa Tatula baitcast reel. My usual kayak partner in crime, Brad, has also had the same issues. When chasing jacks, 20-25lb braid will be sufficient, coupled with a 1.5m, 40lb leader. While on leaders, there has been a lot of talk lately about the FG knot and how good it is for tying braid to mono leader… and it’s all true!

Yes, it’s a time-consuming knot at first but I believe it’s worth every second. I prefer to dab a splash of super glue on it too for extra security – there’s nothing worse than losing a good jack to a bad leader connection. I lost one to a failed albright knot and it still hurts. Generally, ‘less is more’ when it comes to rods on a kayak, especially when your session involves consistent casting.

The last thing you want is to have rods stored vertically in rod holders located behind you. They will get caught when you cast and don’t allow you to paddle under jetties or obstacles. I used to take three rods (fail) and then I moved to two baitcasters – one rigged with a plastic and one rigged with a diving minnow (which is handy when you’re moving between pontoons and rock bars).

The problem with this is, if either of the rods is longer than the kayak and you have the spare rod between your legs, it hangs over the end of the yak, scraping and catching every possible thing known to man. The sound of a $400 rod scraping a jetty is not nice!
Taking just one rod is probably the best option. While this may result in more time changing lures, it can be a lot better than trying to juggle two rods.

Some of my favourite lures are Lucky Craft minnows such as the Bevy Shads and Pointers. These are quality lures and swim perfectly out of the box. In the plastics range, a 3/8oz or 1/2oz jig head combined with any of the Z-Man SwimmerZ range in 4” and 5” makes for a deadly setup. Some of the inventive crew are adding chatterbaits and almost spinnerbait-style lures to their jack fishing arsenal.

Let’s not forget poppers. I don’t often chase jacks on surface lures, however those quiet, early mornings are begging for some surface action. It’s best to try to limit the number of lures you take on a yak, purely because of the lack of storage and access options. I only change lures every now and again, such as when I want to switch from throwing a soft plastic to fishing a deep rock bar with a diving minnow.

On my trips I take one or two small lure boxes, some pliers and lip grips (which are a necessity for holding jacks). Make sure your lip grips are close by, along with the net, because you don’t want to be struggling to find gear with a big jack floating around. I like to plan a trip that gets me on the water for a few hours early in the morning (between 5am and 10am), allowing me to avoid the heat and make for a more enjoyable session.

As you make your way through the river systems, be sure to hit every pontoon, rock bar and large nasty structure you can find, peppering each one with at least a few casts.

You may not get hit on the first, second or even third cast, but then, bang! As I am paddling up to a pontoon or structure I’ll back paddle a little to get the kayak in a still, stable position 2-3m away to allow me to pepper casts along the edges of pontoons, bringing the lure right back either inches from the pontoon or virtually under it as it comes back to me.

If you don’t get those lures as close as possible to the structure, you’re wasting your time and may as well be whiting fishing. As elusive as jacks can be, the bonus is while fishing for them you will get hit by all kinds of by-catch. I’ve caught a variety of species including cod, flathead, pike, small barracuda and tarpon.

I can tell you, the by-catch is more than welcome because it can be a long time between jacks. Don’t expect to catch one on your first trip or even your fifth. It will require a number of trips before you nail some consistent areas and refine your techniques. I tend to release all my jacks on the Gold Coast.

The population isn’t huge and I believe (like many others), they’re too good to catch once. Yakking for jacks isn’t as bad as it sounds. If you have a kayak and aren’t having a crack for jacks this summer, then dust it off and get out there.

Some awesome Gold Coast mangrove jack fishing can be had around the canal systems and it can be a great alternative on days when you have only a few hours to sneak in a quick fish and getting the boat out is not an option.

Jason is an experienced Gold Coast-based fisho who loves nothing more than sneaking offshore to chase trophy snapper or getting into the estuaries to target jacks and more from his kayak.
Previous Perfect spring weather in Noosa
Next New Fin-Nor Biscayne rods