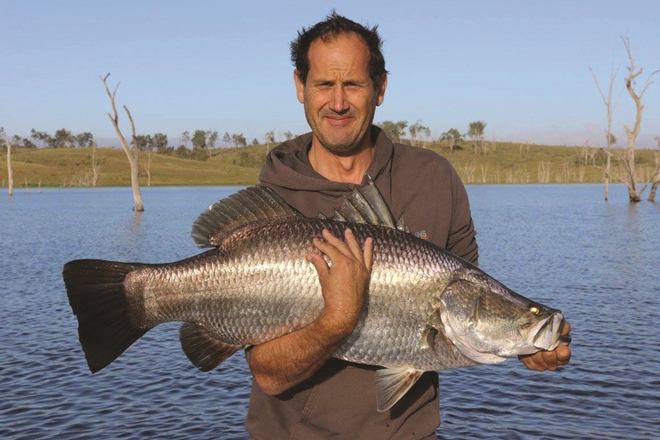 Persistence paid off for Simon, catching a 98cm barra.

Lake Monduran Barra Back on the Bite

THIS past month has seen the Lake Monduran barra firing.

Conditions have been ideal and with the cold weather still not upon us, the barra have been in a feeding frenzy. Don’t get me wrong, the fishing is not easy and you have to work those lures hard, but the chance of a few hook-ups and maybe even boating that metre-plus barra is the greatest it has been for a long while. Fish the rainforest areas in the late afternoon when the barra are soaking up the heat, ready for the night hunt. Early morning is my second-favourite time of day to be fishing. Get into the timbered areas where the sun hits the water as soon as it rises.

One of the things every angler needs is the drive of positive thought. Most anglers I know who constantly catch quality fish always go out with the best attitude. To find out about all the hot fishing spots on Lake Monduran, make sure you pop in on the way through and see us at Foxies Barra Havoc, on the highway at Gin Gin. In the April edition of Bush ‘n Beach I talked about Aussie lures. With so many fabulous lures produced in this country, I could not cover all those we stock at Foxies Barra Havoc in just one issue.

In that issue I did touch on James and his Balista LED technology lures. Well James called into the shop recently and was very excited. He had been fishing the east coast in between his sales calls and popped his kayak into the Kolan River at one of the crossings down from Monduran Dam. In a couple of hours James caught and released six healthy bass. His weapon was the Balista LED flashing Juggernaut. This lure has exceptional balance, allowing it to be retrieved very slowly to tempt even the most dormant fish into striking. The Balista range includes some great lures for use on impoundment barra, such as the S-Pop, which is surprisingly effective on big impoundment barra considering its small size, as well as the Firestorm 120. Testing lures in the field; what a dream job.

Aussie lure maker Rowland and his lovely partner Belinda recently arrived at Foxies Barra Havoc to gain some local knowledge about Lake Monduran as they too were going fishing to test their Wax’s hand-crafted timber lures. They are fine looking lures and are as strong as anything, making them a must-have in our shop. Now that Rowland has fished Lake Monduran, the home of the world-record barra, he is working on a design for impoundment barra. The Wax’s Lures range will catch a wide variety of species including jacks, flathead, perch, bass and barra.

Eddie Studman makes Koolabung Lures. He started from humble beginnings on the banks of the mighty Macleay River in NSW, designing and making his lures in Port Macquarie. His range is vast and suits a variety of species and fishing styles. The Koolabung range includes lures to catch any fish, with numerous deep divers, shallow runners, paddles, poppers, fizzers and vibrating blades.

At the moment, the soft plastic for catching barra in Lake Monduran is made by Happy Rock Softies. These lures are made in Gladstone by Trevor Burgess and they have been alluring many species up and down the Queensland coast. The Happy Rock Big Willy coupled with a 9/0 jig head will easily secure a barra in excess of a metre. The colour range seems to excite the fish and this lure has definitely made its mark at Lake Monduran, but it’s a great softie to have in any lure box.

Last but not least are our crab pot makers. Foxies Barra Havoc stocks two Queensland crab pot makers. Mark Rudd from Crab‘n Gear tests his pots around the Redcliffe peninsula and Jeff Hayes of Hayes Pots catches crabs on the Gold Coast. Both make a variety of crab and red claw pots that work well, have a very sturdy construction and are user friendly.

Here at Foxies Barra Havoc, we love to support the small business people and we are always on the lookout for unique Aussie products that work extremely efficiently.
Until next month, happy fishing.