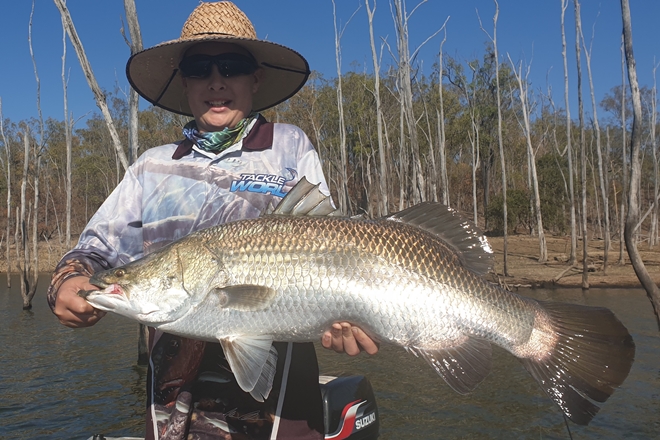 Thomas Chadwick with the 83cm barramundi he caught at Lake Monduran on a Shimano Combo given to him by his father for his 14th birthday recently.

With the weather around the Bundaberg area not looking too good for the offshore reefs this weekend, there are some options for those who want to poke their nose out the front to the inshore reefs.  We have heard reports of schoolie mackerel being caught close in from the mouth of the Burnett River down to the Elliott River.   There has been good catches by casting slugs or Flasha spoons into the schools.  This will soon have you hooked up.  There are also reports of good-sized grunter being caught off the Cochrane Artificial Reef by casting Samaki Vibes or 4” to 5” soft plastics.  For those who like bait fishing, a well-presented pilchard floated out the back should produce a good feed of whatever comes along.

The bit of rain we’ve had earlier this week should improve the fishing and get those mud crabs out of their holes and moving.  So before you head out for a fish, put the pots in.  As the water warms, there has been good reports of 50cm mangrove jack and good-sized grunter being caught.  Casting 4” soft plastics or Zerek Prawn lures has been doing a lot of the damage.  For those wanting to chase a good feed of flathead, one of my favourite lures is the Zman 4” Curl Tail Bloodworm.  This usually gets the job done.

The Kolan and the Baffle are two of the best systems in which to chase the mighty mangrove jack.  Casting 3” to 4” soft plastics in amongst the snags, or floated down around the rock bars should produce if you are persistent enough.  If chasing a feed of flathead, try finding a good sandbar that has a drop-off on the edge and cast onto the sandbar and work your lure over the drop-off, hopefully into a large flathead’s mouth.  Remember, with lure fishing you must be persistent – it will pay off.  To catch both these species on bait, try using mullet fillets or live sprat.  Sit back, have a beer and wait for that awesome bite!

For those who want to learn how to lure fish, this little lake is the place to learn.  Casting Spinnerbaits around the timber has been producing the most fish.  Bass in and around the 40cm mark have been common with a couple of saratoga thrown in as a by-catch.  When the bite slows from the timber or around the edges, move out into the deeper water.  Once you find the fish, cast back over the top of the school, sinking a soft plastic to the bottom with a slow roll back to the boat looking for that fish to bite.

With the closure of the barra fishing in the salt, Lake Monduran is the place to go whether you are a first-timer or a seasoned barra angler.  Good reports of fish from 50cm to 90cm have been caught in the past month.  Casting Squirrels in the wind-blown bays and around points has been producing the most fish.  Persistence with casting into these areas around good snags should produce a fish or two.  Remembering to put five to ten casts into that snag.  Anglers still have the chance to catch the Bundaberg Toyota Lake Monduran Golden Barra worth a whopping $150,000 Toyota Land Cruiser and boat and motor package.

See you on the water.