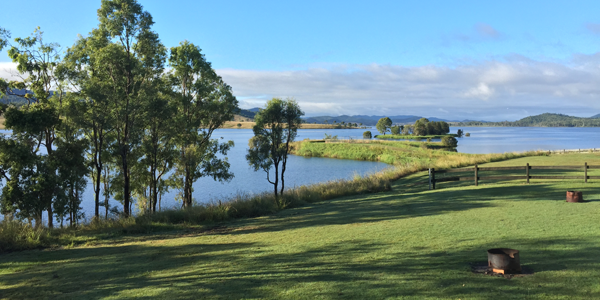 A COUPLE of days relaxing and fishing with my girlfriend Carly at Lake Somerset Holiday Park sounded like the perfect getaway. Located about 110km by road northwest of Brisbane, the holiday park on the western shores of Lake Somerset is set in a truly idyllic location.

Timing our escape with the last of the working week rather than a weekend meant we would encounter minimal traffic on the road and hopefully a relatively uncrowded holiday park. However, before we could head off I had to figure out a fishing game plan. I’ll be honest, I’d never been freshwater fishing before and apart from reading the articles in BNB I really had no idea how to catch a bass or any other freshwater fish. So I stopped in at a few tackle shops prior to our trip and picked up some advice as well as lures in the form of 1/2oz TT Vortex spinnerbaits and 3” Berkley Gulp Minnow Grubs in Watermelon.

After talking with the staff, I decided that without a sounder on my kayak our best plan of attack would be to fish the edges and snags with slow retrieves in the hope of enticing a hungry bass. In the days leading up to our holiday I kept checking the forecast and the weather was looking decidedly dodgy. Forecasts for 100mm-plus of rain on the Friday were really not what I wanted to see, but we figured it would be too painful to change the trip dates after Carly and I had both taken the time off work in advance. You remember that ridiculous amount of rainfall the great southeast received on May 1? Well we were at Lake Somerset. What timing!

Picture-perfect weather in the weeks before the trip and again for weeks after was just salt in the wounds of quite possibly the worst-timed escape ever. In any case, upon arrival at Lake Somerset Holiday Park on the Thursday in light drizzle we were surprised to learn that over 100 souls were currently staying at the park, despite the abominable weather forecast and midweek timing. A popular place then. The staff who greeted us at reception were lovely and the reception area was impressively well stocked with basic groceries and an array of Smak Spinnerbaits and other fishing tackle. Rather than the fish, the staff recommended we target red claw because they had been captured in good numbers of late and apparently tasted much better than any old bass.

However, Carly won’t eat any seafood other than fish because she’s a little strange, so red clawing was off the list. We were fortunate enough to be staying in a Lakeview Villa (bugger camping in the rain!), and the villas along with the Log Cabin are located right out on the point, with a beautiful 180-degree view of the lake. Travelling out to our villa from reception saw us pass a number of somewhat soggy campers and caravanners as well as the large, permanent Safari Tents that offer an outdoorsy, camping experience with a bit of extra comfort and without the hassles of tent poles and tarps.

After unloading the ute and putting the kayaks on the balcony of our villa, Carly and I were itching to get back to the awesome little mini golf course situated right next to reception before getting the kayaks on the water for a late afternoon fish. Unfortunately, the weather really wasn’t playing the game. 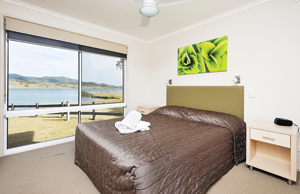 The showers didn’t show any sign of stopping, which we confirmed by jumping on the Bureau of Meteorology website to check the radar. However, while the dismal weather was certainly taking the shine off our outdoor aspirations it wasn’t going to ruin our relaxation.

Our Lakeview Villa was well appointed and quite modern, with an LCD TV, Foxtel, queen bed in one room and two singles in the other, washing machine and dryer, microwave, stove and fridge as well as ample tables and chairs for a much larger group than ours. Towels and linen were supplied, which was a good thing because we didn’t really want our sheets and so on getting soaked in the tray of the ute on the way to and from the dam.

So after catching a movie on Foxtel in the early afternoon I left Carly watching the telly on the comfy couch and ventured out in the now steady rain to have a fish from the bank on the point. Having never used a spinnerbait before, I tied my Red Nightmare TT Vortex to 6lb braid and 8lb leader on my Wilson Magnum and ATC Valiant spinning combo and cast it out. According to the tackle shop staff, going slow is the key for using spinnerbaits, but I’m guessing this is when working the lure from the shallows into deeper water, as is usually the case in a boat, rather than the other way around. Moral of the story: on my third cast my beautiful (and not cheap) spinnerbait became snagged on some bottom structure and no amount of angle changing, wiggling or wading was going to free it. Bye bye spinnerbait.

Thoroughly dejected, I trooped back to the villa and Carly and I headed to reception to grab some dinner and breakfast supplies as well as a new spinnerbait for me. There’s no other way to say it: Friday was a write-off. The rain did not stop coming down all day, so Carly and I made do by kicking back on the couch with the heater on and watching a few movies. It wasn’t at all what we came to do but it certainly wasn’t unbearable either. Later in the afternoon when the rain eased somewhat we decided to take the ute for a spin to the dam wall. Water was absolutely pumping out of a release port on the lower side of the wall, which was an awesome sight.

The evening saw us head to the Stanley Hotel in nearby Kilcoy for a great feed before settling down for the night and praying that the rain would be all gone by the morning. Come sunrise on Saturday our prayers were answered, with the big yellow orb back in the sky and shining down on us unabated. I ducked out as quickly as possible and got my kayak on the water, with Carly launching the kayak she had borrowed from my workmate Jo shortly after. Due to the swift death of my first spinnerbait on Thursday I was hesitant to use my new one too aggressively and generally threw casts wide of the mark, so tied on a Gulp Minnow Grub and ruthlessly flicked it into any bank structure I could find.

Carly fished about 50m away with her purple TT Vortex spinnerbait and we both managed to get a few hits, however neither of us could stay connected. With our deadline to get home fast approaching, we paddled the short distance back to our launching point near the villas, Carly deciding to troll her spinnerbait just out from the bank on the way. Only 20m from the launch site Carly was on, quickly pulling her rod from the holder and setting about fighting the fish. However an unfortunate turn of events saw the wind and fish drag her into the overhanging branches of a tree, where she subsequently squealed a bit and let all pressure off her line, which was all the invitation the fish needed to shake the hook and be gone.

It was a bittersweet finish to the trip, as we’d had a beautiful and enjoyable morning on the water but the weather just teased us by remaining excellent for the rest of the day. In any case, we will return to Lake Somerset Holiday Park, though hopefully in fairer weather, and we will be determined to land our first freshwater fish. Despite the shocking weather, we managed to enjoy a comfortable stay in our villa and appreciated the extra creature comforts it afforded over a regular tent. For more information on the park and its fantastic facilities and location, visit www.lakesomerset.com.au or call 1800 606 759.

Daniel is BNB's subeditor and occasional fish-wrangler. If you've got a great story or at least an idea for one, flick Dan an email at editorial@bnbfishing.com.au
Previous Win big with Coastal Powerboats
Next 1770 the place to catch a feed