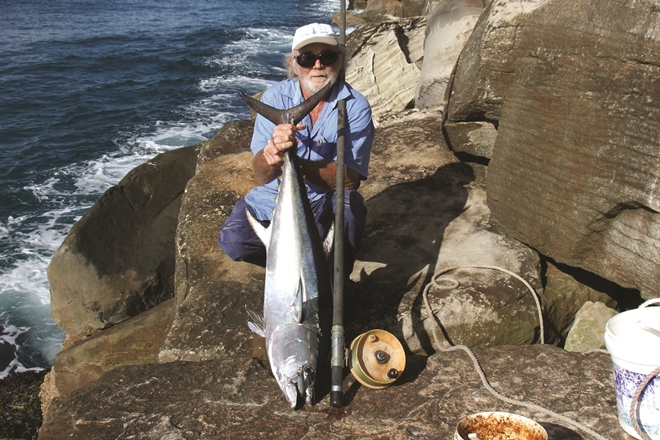 The author celebrated 40 years of spinning the headlands and breakwalls for tuna with Alvey reels and surface poppers by landing this 17.5kg fish at Iluka during the first week of May.

THE land-based longtail tuna and mackerel season came to a grinding halt mid-May after a couple of days of howling westerly wind followed by large 3-4m swells that lasted for several days.

Sure, you may still be in with a chance of a land-based longtail tuna off the walls and headlands during June, however I would take a good supply of coffee and pies as hook-ups will be few and far between. The good news is the first two weeks of May saw the Iluka wall really fire for tuna, with several nice fish taken by anglers lucky enough to get them to the gaff before they were devoured by ravenous sharks that moved in in large numbers.

Sydney anglers Hank and Milly Merhi, Red Arthur and Ahmed Dennaoui were unlucky enough to be fishing for tuna and mackerel on the wall as the sharks moved in. While the lads managed to land a handful of solid mack tuna and Hank scored a little longtail tuna of about 11kg, they returned to Sydney feeling gutted after hooking about a dozen tuna on their last day, only to see every fish eaten by the sharks. Red hooked the biggest tuna by far that day (about 25kg), but sadly as the fish was about 40m from the gaff the water turned red with blood as four sharks tore it apart, just like all the others that were hooked.

Days later, Red made a surprise return visit on the Mother’s Day weekend with Sydney fishing guru HT who featured in my column last month. As I mentioned last month, HT is a noted gun angler in the Sydney region and bugger me if he didn’t put his talent on show again this trip. The very first bait HT put in the water got scoffed by a horse tuna and instantly we all thought there was no way he could land such a big fish with the number of sharks that were around.

Fifteen minutes into the fight, the fish began arcing about 50m out when we saw two huge sharks begin their attack on the distressed fish. One shark attacked from the left at speed while the second came from the right, then at the very last instant HT put his reel in free spool to allow the tuna a chance to avoid the sharks, which it did, and watching the sharks headbutt each other had us rolling in laughter. I’ve seen funny stuff like that in rugby league where two teammates miss the opposing player and head clash, but I had never seen it happen in the wild.

The sharks soon regrouped and the hunt was on again but this time instead of free spooling his fish, HT locked up the drag and ripped its head out of the water, and keelhauled it to Mischa who was waiting with the gaff, which he sunk home first shot. It is very hard to put into words the feat that HT achieved with this fish, but all who witnessed the fight were left in awe at the skill he displayed during the land-based longtail tuna fight.

Red once again fed the sharks with every fish he hooked, however he did end up with the head of a jellybean-sized longtail. This trend continued for the next week, with the only fish making it to the gaff being hooked by Woombah angler Dave Deveigne, and even it had teeth marks along its tail.

Prior to all this carnage, I waddled out with good mate (and gaff man) Ted McLean of Ashby and snared a 17.5kg longtail on my trusty 700A5 Alvey reel and surface popper, which marked my 40th year of spinning for tuna with an Alvey reel. I reckon it was a pretty good effort for two old codgers with a combined age of 123 years, not to mention the combined land-based game fishing experience of 85 years. Although Ted missed out on a fish that day, he did manage to celebrate 45 years of LBG by snaring a spanish mackerel the following day on a live gar.

Most anglers this month will probably begin to focus on species such as jewfish and bream as winter finally takes a hold and both these fish move into the rivers in good numbers to meet the large schools of mullet pushing out to sea on their annual migration. Naturally enough, the bream do not eat the mullet whole as the jewfish do, but they love the roe the mullet deposit along the retaining walls, wharves and other structures.

I have often been asked how I find a good spot to fish for jew in the rivers during winter and the answer is pretty simple. Concentrate on looking for schools of flat-tail mullet during the day on high water throughout the first 4km of any river system. The fish will be found milling around bridge pylons, jetties, piers, retaining walls and other structures such as fallen trees and drain outlets. When you find such spots that are holding mullet, simply return to that location at night during the slack high water because sure as eggs the jew will know they are there as well.

This month I would concentrate on using live mullet for jewfish inside the rivers from the boat or shore, while off the breakwalls you won’t go wrong with fresh squid, live yellowtail and live tailor (minimum size 30cm in NSW). Off the beaches try swimming a live mullet or tailor out in any rip you can find, and off the headlands hard-bodied lures and feather lures should do the trick.

The local beaches are fishing well for bream, tarwhine and school jew on live beach worms and yabbies, with late reports of sizeable tailor coming from the point of the Iluka wall on lures and Back Beach on whole gar. June will see excellent catches of big snapper coming from offshore as the pelagics head back up north.