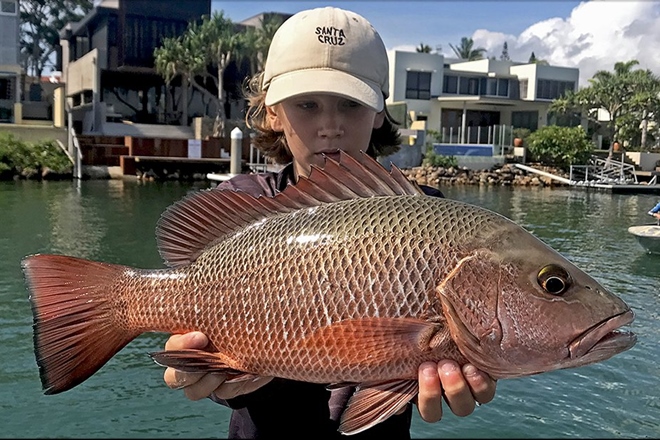 Nathan Meadows with a mangrove jack. Caught in the Woods Bays on Sunday. Size 48cm. Caught on Squidgy Bio Tough Curly Tail in Cracked Pepper colour. Released, as always, back into the river. Photo: www.fishingnoosa.com.au

Large swells have kept anglers in the rivers

With the swell up last weekend, the rivers were the place to be if you were looking for a feed of fish. Whiting were in good numbers around the Noosa River Dog Beach, River Mouth, Frying Pan and Weyba Creek areas. Live yabbies, pealed prawns and worms were all popular baits. Small poppers or surface walkers have also been claiming some larger fish. Trevally are back on the bite around the back of the Noosa Sound and Woods Bays with the fish responding well to live baits and soft plastics like Zman Slim Swimz, Power Baits Gotam Shads and Squidgy Prawn Curly Tails . Upriver the stretch from Tewantin up to Lake Cootharaba has been fishing well for school size jew, with those deeper sections of the river producing more fish. Good quality flathead have also been right through the river, the sizes have been a little smaller but little fish are sweet, remember legal size is 40 -75cm. Quality bream are also present in the system with areas like Munna Point, the sand bags at the end of the dog beach and Gympie Terrace all fishing well. Pilchards, prawns and mullet strip baits have all been working well. With the water just a bit dirty after last week’s rains the Jacks have been out in force, these fish traditionally hang around structure and feed on passing baitfish and prawns but with the cover of dirty water plenty of jack have been about and feeding in more open waters. Mud and sand crabs have also been in good numbers in the Noosa River, with the mud crabs a little further upstream and the sand crabs more toward the mouth. Again loading those pots with fresh mullet has been the prime bait.

With the wind and swell up over last weekend not to many boats headed out, reports we have are from before we saw the bigger swells coming through, most worked the closer reef like Sunshine Reef and Halls Reef. Halls saw some nice mackerel including spotted and spanish as well as bottom dweller like pearl perch, cod, sweetlip, and squire. Sunshine Reef was again a standout with some good catches coming from the bottom including venus tusk fish, coral trout, squire, sweetlip and smaller cobia. Baits include live baits, pilchards, squid, and slab baits like mullet and bonito all claimed good fish. Soft plastics and Micro jigs also got the job done.  Good quality long tail tuna were on offer as well with plenty around Jew Sholes, tuna were taking a liking to slugs and smaller stick baits. For those boats that did venture a little further North Reef the Hard and The Banks were all fishing well with some larger fish on offer, pearl perch, dolphinfish, red emperor and cobia all boated.

On the beaches it been a little tough with conditions a little rough, there are some decent gutters around at the moment with plenty of sand scarfed out after recent storms.  Bream have been in good numbers along most of the southern beaches, small flesh baits like mullet, pilchard and bonito have worked well. Whiting have been around the river mouths with the best time seeming to be two hours either side of the tide.

In the fresh water, Lake MacDonald bass have been around the deeper drop offs. Spinnerbaits and small hard bodies are working well,  2.5” plastics including Chasebait paddle tails and Fuze 55mm prawn heads on 1/6th jig heads worked through the schools has got some good reaction bites. Borumba Boat Ramp and Day use area has been reopened to the public from Friday 16 February. SEQ water has asked that all vessel operators to exercise additional caution on the water as recent inflows may result in submerged hazards. With all that said there have been good Bass and Saratoga are on the bite in Yabba and Kingaham arms with vibes and hard bodies working well.