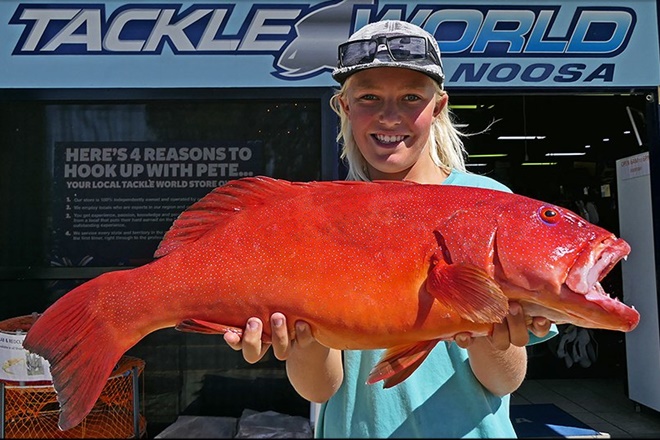 With a break late last weekend and into Monday we saw the larger boats headed offshore to make the most of the narrow weather window. Out wide to Double Island the sharks were on patrol but those anglers who boated fish got a mixed bag of Scarlet sea perch, tusk fish, pearlies, sweetlip and snapper.  With lighter currents to the week before, well baited paternoster rigs won the day with a mix of fresh mullet, pilchard and slab baits. North reef has been producing great numbers of sweetlip and some standout spotty mackerel up to 900mm as well as pearlies and small snapper. In closer to home Sunshine reef has been producing some cracking coral trout and the occasional Spanish and big spotty mackerel. The trout have mainly been hitting live yakka and slimy baits as well as fresh baits of mullet and gang hooked pilchards. These baits must be fished stationary and hard on the bottom for success.

After the rains that fell from Tuesday onward the Noosa River has had a good flush and with it the fish have started to liven up. With less current anglers have been getting good numbers of jacks and flathead especially around the mouth of lake Cooroibah and Cootharabah. Between the lakes the mangrove jack have been chomping on live baits with schools of trevally, especially big eyes keeping anglers interested. Lower down the river mouth is producing some whiting and bream and around the sand bags we have seen some bigger flathead, mangrove jacks, tailor and trevally. These fish have been taking whitebait and mullet baits as well as soft vibes like the Samaki thumper and Berkley Shimma shads during the dirtier water run out tides. Mud crabs have been featuring so make the most of our Easter Catalogue special and load up on our 4 pot specials.

Surf fishing has started to warm up with small dart and bream being the main focus. After dark there have been a few good tailor caught on whole pilchard baits and even the occasional jewfish has been taken during the dark on bigger live baits and fresh slab baits of mullet, squid and pilchard. The whiting are starting to turn up around the various river mouths along the coast with fresh worms and yabbies have been the better baits when fished on lighter running sinker rigs.

Freshwater has certainly warmed up with some mid-week sunshine hitting the darker water. Borumba has been quieter, but Lake Mac Donald has been firing with the saratoga and bass. These fish falling for just about anything you can throw at them. Be sure to carry a wide range of surface and hardbodies including Jackall micro pompadour, Bassday Sugadeep, Jackall squirrel, Norries laydown minnow to name a few great baits.