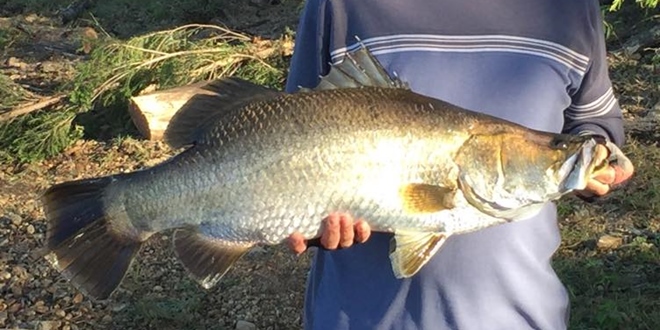 Well, for the guys who have been chasing barra in our local rivers, this weekend will be your last chance to have a crack at these magnificent fish.  The closure on barramundi starts at midday on the 1st of November and goes through to midday on the 1st of February.  The only exception is in our stocked impoundments where you can keep one barra over 58cm during the closure.

The weather this weekend doesn’t look too bad at this stage, with the chance of a thunder storm on Saturday afternoon. By all reports it sounds like the banana prawns showed up in the Burnett River in the same places they did a month ago.  Just be aware to only take your bag limit as the Queensland Fisheries have been and will continue to do patrols over the coming weeks.  But if we all do the right thing there will be no problems.

The Burnett River is still firing with three-tooth jew, mangrove jack, blue salmon and nice grunter all caught in the deeper holes, and some big flathead and summer whiting caught around the many sand bars throughout this system.


The Kolan River would probably be my pick for chasing a barra or mangrove jack this weekend.  Casting soft plastics and suspending hard body lures over rock bars and at any structure you find should trigger a strike.

Once again, the small black marlin and sailfish have showed up in good numbers around the tip of Fraser Island.  We’ve heard reports of anglers hooking up to a dozen fish in a session, so if the weather allows, this should be another top option over the coming weeks.

The annual Win Television Monduran Family Fishing Classic was held last weekend.  Although there were only five barra caught over the two days it was still a top weekend and I’m sure everyone enjoyed themselves.  Let’s hope they raised a lot of funds over the weekend to put back into fingerlings to return this lake to its former glory, and make next year’s comp even better.