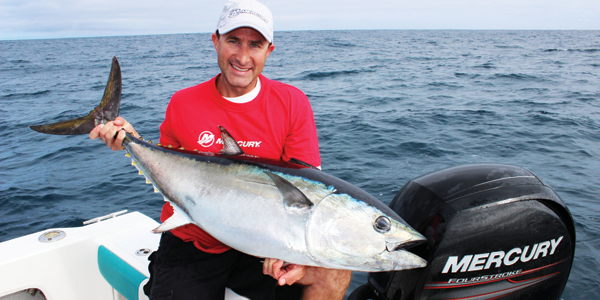 AFTER running two-stroke outboards for eight years, high-profile fishing expert Lee Rayner decided to change up to more modern technology – and he’s selected Mercury. Lee, who’s currently presenting the hit national show Fishing Edge on Channel 10 and ONE, said he did his homework before deciding that Mercury was the way to go.

“This is my profession so I certainly looked into it, and Mercury FourStrokes have a great reputation for delivering plenty of power while keeping the weight down,” he said.

“Of course I have several mates who are true believers having run Mercury Verado or OptiMax outboards for years, and their experience helped convince me as well. “I’m really looking forward to getting out there with the new engines.”

Lee will run Mercury FourStrokes on both the boats he uses. The 552 Evolution Axis centre console will be powered by the legendary Mercury 150hp FourStroke with a MotorGuide electric motor on the bow, while Lee’s 6m Evolution Extreme will have a pair of Mercury 150s.

Lee decided to change from two-strokes to four for a number of reasons. “Four-stroke technology is just so great these days,” he said.

“These Mercury engines have unbelievable acceleration and are really robust. “They obviously burn much cleaner and have lower emissions as well. “It was also about the show.

“Fishing Edge is all about showing people they can get out there and do it on their own, go places and catch some really good fish. “Many, many viewers will want to do that with a four-stroke instead of a two.”
Lee is certainly a man in the know.

Before launching Fishing Edge in 2013, he’d been a long-time presenter on Rex Hunt Fishing Adventures and IFISH.
An author of several fishing books and a regular contributor to top fishing magazines, Lee often co-hosts a number of radio fishing shows as well.

“I’ve always thought of Mercury as a really forward thinking group,” Lee said.
“They offer so much for recreational fishers – with the world’s best technology and the world’s largest range of motors.“Like I said, I just can’t wait to get these new FourStrokes out on the water so they can show me what they can do!”