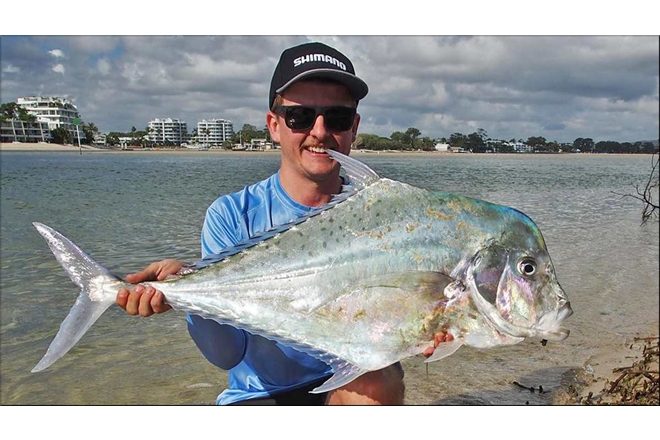 WELL the school holidays have landed and we now have some lighter winds and clear waters to go fishing this week. So far we have seen some great captures off the beaches and in the estuaries. Offshore is still a little bumpy for most owners of smaller boats.

Those who made it offshore including the charters got some solid snapper at North Reef along with a mixed bag of reefies and even big yellowtail kingies. These fish love drifted live baits as do big snapper and will certainly put all of your gear to the test. These bigger fish are known for heading down to the reef and busting you off so be sure everything is new and in top condition. You would be kicking yourself for using a rusty hook and have it snap. Check out the Shogun range of gang hooks as these heavy gauge hooks stand up to high drag settings. Other than that if headed offshore be sure to monitor the bar and fish during the early mornings before the winds pick up.

The Noosa River is starting to show signs of some good flathead as now is their breeding season. The lower estuary up toward the mouth of Lake Cooroibah is producing fish from 60cm to 90cm. At this size they are best released these so they can continue to spawn for the next generation. If using lures then be sure to put in plenty of pauses with soft vibes like the Berkley Shimma fork and the Zerek fish trap two great options especially if new to using lures. For bait anglers grabbing your cast net, bucket and aerator is a great way to obtain live herring and poddy mullet. These will last much longer with clean water and aeration. If unsure how to throw a cast net be sure to ask us how.

Besides flatties the whiting are coming on strong around Gympie Terrace and the dog beach. These fish can be found in big schools and love live beach worm, yabbies and even peeled prawn baits. Be sure to keep lines light for the best presentation in the current and be sure to keep hooks super sharp as they love to leap out of the water once hooked. Lure fishing is one of the best ways to target these fish and wading around the flats casting small surface lures is a great way to spend the day. Take a look at the new Shimano Brenious Risewalk lure which just landed and don’t be too shocked if you get a wide range of other species including trevally and tailor jumping on!

Other fish include queenfish which can be found throughout the system but really like the river mouth and lake entrance areas of Cooroibah. These fish will smash big live baits and lures. They are a sucker for bigger jerkbait soft plastics on heavier 20lb leaders. Take a look at the Chasebaits Fork bait in the 5 inch size. Another great option includes bigger surface stickbaits like the Lucky Craft Gunfish 115mm. This lure will also call up the bigger GT that have been patrolling the system too so be sure you are well equipped if land based.

Off the beached things have been fairly quiet with the winds and increase in swell reducing visibility. The daytime is still producing dart, bream and whiting, especially around the river mouths along the coastline. Night time next week should see an increase in evening fishing as we approach the new moon phase. This is a great time to target the elusive jewfish and maybe find a tailor or two. Be sure to fish around the turn in the tides and keep baits fresh or live for the best results.

Freshwater fishing has been going well although during the holidays the additional boat traffic can cause the fish to shut down a little. Be sure to be on the water early or late which work very well as winds usually drop off then. Bass fishing during the morning on small jigs and plastics will be a great option if winds are a bit high for those in a kayak. If in a boat then suspending hardbodies and soft vibes will seek out the fish. During the late afternoon we should see a strong surface bite so be sure to throw smaller poppers and surface walkers. If you have heavier gear the check out the new Chasebaits smuggler for the latest in bigger creature baits. This will be sure to call up a monster from the deep!