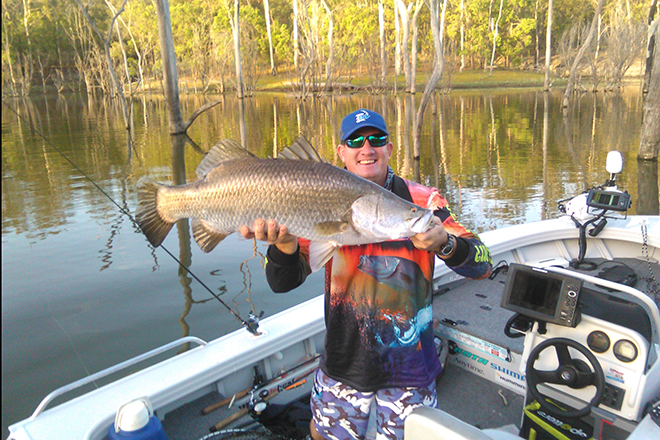 Once again, for this weekend around the Bundaberg area, it looks like most of the fishing will be restricted to the local rivers and creeks, due to the south-easterlies that just don’t seem to stop.

The good news is that most of our local rivers are starting to fish really well, and with the new moon Saturday night, the bigger tides should really clean up the systems and bring the fish on the chew.

I’m tipping there should be quite a few nice mangrove jack caught this weekend. With the cleaner water and the slight chance of a storm, both afternoons should fire up these angry, hard-fighting sport fish. Suspending hard body and weedless soft plastic lures cast into the rock bars and snags, have both been working well and definitely worth a crack this weekend.

The beaches along Moore Park and Coonarr should be worth a fish early both mornings before the breeze picks up. Good numbers of whiting, dart and the odd flathead have been keeping anglers entertained.

The Burnett River is nearly back to normal. Plenty of bream, three-tooth jew, flathead and big grunter have been caught right throughout this fantastic system.

The Australian bass at Lake Gregory have really fired up over the past fortnight. The impoundment is back to normal levels and the bass are smashing heaps of different lures. This time of the year is prime time to target Aussie bass on surface lures around the lily pads and weed edges. The bass love hunting early morning and late afternoons and there’s no better feeling than watching your popper get smashed off the top by a big Australian bass. Once the day warms up, try trolling the main basin or casting spinnerbaits, Jackall TN60s, soft plastics, Vibes or Tailspinners. These have all been working well at this fantastic little impoundment.

Lake Monduran is still just running over the spillway, but there have been heaps of barra up to 70cm willing to play the game. A lot of the fish have been caught right up the backs of windward bays. The Rapala Shadow Rap and Jackall Squirrell have been the two stand-out lures this past week.