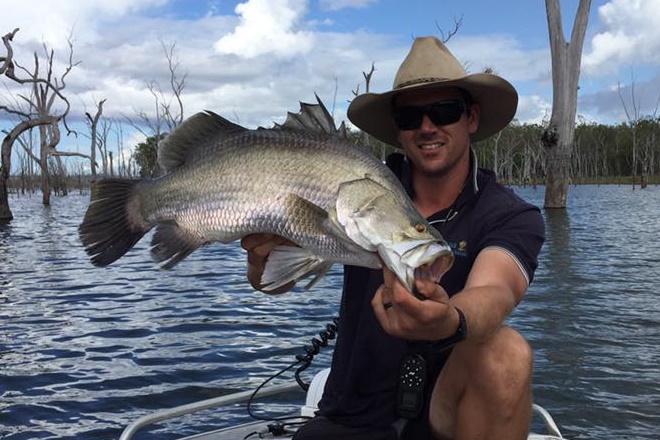 Sid Olive with the barramundi he caught at Lake Monduran over the Easter break.

Many families enjoyed Easter around Bundaberg

I hope everyone has a fantastic break over Easter.  It was awesome to see so many families out and about enjoying what the Bundaberg region has to offer.  At this stage the weather is looking better than last weekend with lighter winds forecast for the local area over the coming weekend.  Always check the forecast before you head out though.

The Burnett was extremely busy over Easter by all reports.  It still seemed to produce the goods with some terrific fish caught.  Big numbers of quality bream are still on the chew.  Most of the rock walls from Burnett Heads to Kirby’s Wall are fishing very well.  At this time of the year big flathead seem to inhabit similar areas and are a common by-catch with the bream fishermen casting soft plastics down the rock walls.  I’ve heard a whisper that there are a few prawns around as well, and some nice mud crabs.

Miara Caravan Park is always an excellent option to camp at over the Ester period and even though it was a bit windy this year, plenty of fish and crabs were caught.  Towards to mouth there were some cracking whiting, flathead and grunter caught.  Further upstream the water temperature was still warm enough to tempt a few barra and mangrove jack out to play the game.  Let’s hope this type of action continues over the next few weeks.

The shallow Elliott River system always fishes well at this time of the year.  The shallow sand bars are the perfect habitat for flathead and summer whiting, and they can be caught using many different techniques.  The bait fishermen have been doing well using fresh yabbies, beachworms and sprat as bait, whereas the lure fishermen have been having a ball landing heaps of fish on either Z-Man or Squidgie soft plastics.  It’s still worth a look for a few mangrove jack and barra from Shark’s Nest to Fallon’s Rocks.  Campers staying along Coonarr Beach over Easter also managed to catch a good feed of dart and whiting off the beach with beachworms being a stand-out bait.

Lake Monduran was also an excellent option to set up camp over Easter, and with movies every night, a water slide, reptile show and plenty of craft activities, it kept the whole family entertained when you weren’t out on the dam fishing for barramundi.  I regard April to May as my favourite two months of the year to catch barra at Lake Monduran, as the barra seem to be more active before the water temperatures drop below 20 degrees.  The average size of the barramundi caught over the weekend would have been between 60-80cm with the hot lures being the Rapala Shadow Raps, Jackall Squirrels and Lucky Craft Pointers.