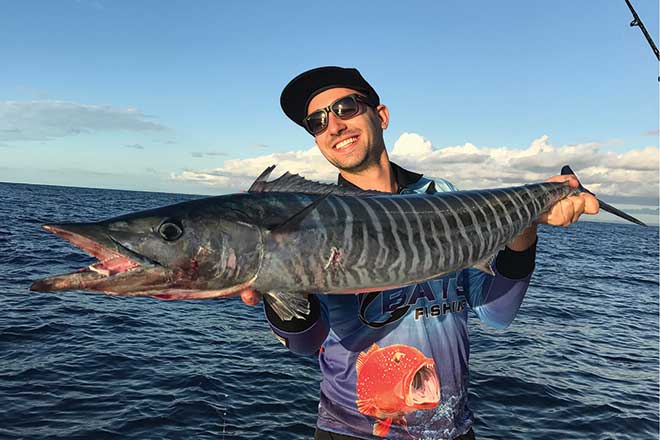 The author hooked one of the larger wahoo on a Rapala Red Head hard-body.

THE water heating up rapidly can only mean one thing: pelagic action!

Over the past couple of months, we haven’t fished as much as we would have liked during the busiest time of the year for most people. Running a construction company can be stressful, but running a construction company with employees who are die-hard fishos is even more stressful.  It’s amazing how many people get the flu on days with a five to 10 knot variable wind.
Every fisho knows the best bribe is the promise of fishing.

We promised the boys that if we finished a job early, we would take the following day off and head out for some offshore Moreton Island fishing for wahoo. And what do you know, the job finished early. We planned for a half-day trip early in the morning, trolling the shallows of Cape Moreton.

We met at the Port of Brisbane at 3am to have lures in the water at first light. With the forecast showing five to 10 knot southeasterly wind and seas below 0.8m, we knew our Grady-White boat would have us out there in no time. Arriving at our first spot at 4.15am, the sun was just beginning to break the horizon.

Within minutes we had lined the boat up and began releasing three hard-body lures into the water to troll the edges of the reef. Within five minutes of trolling we had our first hook-up on a Rapala Red Head deep-diver. Judging by the fight, we knew it wasn’t a wahoo, and the fish to break the surface and begin putting on a show was in fact an astonishing mahi mahi that was happily boated.

After landing it, we threw the lures back out, and as the third lure was being set, the first two rods started screaming off in a double hook-up. Keep in mind, this all happened within 15 minutes of arriving on the spot. This time the reels were singing and we were screaming wahoo!

Both wahoo were boated and kept for a feed. This Moreton Island fishing action continued in following troll runs and the wahoo were thicker than ever, with lures not lasting even two minutes in the water before being smashed. The most exciting part was seeing a three-way hook-up on wahoo and all three fish being boated.

By about 5am the boat traffic picked up to roughly 10 boats trolling the same area with hard-bodies. We decided to change to hex-head lures and give them a crack at 13-14 knots because the ‘hoo had gone off the bite. We didn’t get a touch for the first 45 minutes, but right on the tide change our left short lure was absolutely smashed and the Shimano Tiagra was screaming with joy.

This time Peter ran to the rod and we realised the line was peeling off faster than ever. Out in the distance we could see Peter’s fish surfacing, and it turned out he had hooked a little black marlin. Unfortunately, as the fish approached the boat, it took off on another run and spat the hooks.

The fishing had slowed, so we headed into the shallows of Moreton to let the boys go for a dive. The boys are experienced divers, so we had high hopes of seeing quality fish come up. Dan was in the water for literally five minutes before he began calling out to us. As we approached, the fish in his hand that at first appeared to be a mackerel turned out to be a dinosaur tailor.

No one on board had ever seen a tailor of this size. The boys continued diving and got a couple of crays and tuskfish. We then decided to head back into Moreton Bay and trying some inshore Moreton Island fishing, flicking for spotty mackerel around the beacons near Tangalooma. We caught and released two spotty mackerel because we had enough fish for the table.


Our crew arrived back at the Port of Brisbane around 11:30am, making it an early but productive day of fishing with the boys, with smiles all round. It just goes to show that it’s not about how long you spend out there, it’s all about being on the right spot at the right time.

This was certainly a Moreton Island fishing trip the boys and I will not be forgetting any time soon.