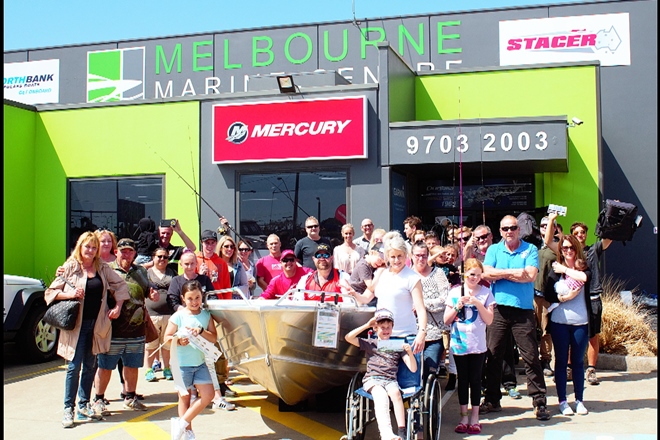 The boys collected their tinnie from Melbourne Marine.

Mercury gets aboard with OZ Fish TV

MERCURY Marine and leading dealer Melbourne Marine are now proudly aboard with the team from OZ Fish TV.

Michael Delmarco and Chris Monnier – along with their co-presenter Jesse Hommelhoff – are currently finalising season six of the popular fishing show which airs on Foxtel and Melbourne’s Channel 31. With viewership now past the 100,000 mark, OZ Fish TV has built a loyal following by representing the average angler – capturing affordable, realistic and enjoyable fishing in locations people can recognise.

“We’re not into the $100,000 boats and exotic tropical locations that most of us simply can’t afford,” said Chris, who we interrupted while he was throwing a line over the side.

“We’re here for anyone with a rod and reel who wants to have a great time fishing. I’ve always been a Mercury man and these new engines we’re now using – I love them, they’re great.

“The thing about us is that we’re all about quality people and quality products, we’re not getting paid, these are just really good engines. What I really notice is the smooth power delivery, the trolling control is great and you know what, they look really nice – they are a really nice motor to have on your boat. The fuel economy is really noticeable as well.”

“It all started when a group of us were doing some land-based fishing about six years ago and one of the guys, who’d produced some TV shows, said we should shoot a pilot,” Chris said. “So, we did and that got taken up by community TV, then Foxtel got in contact with us and now we get more than 100,000 viewers. We all do it part-time, but we absolutely love it.”

Season six of OZ Fish TV is scheduled to hit Foxtel and Channel 31 screens in late January, but if you don’t want to wait there’s plenty to be seen on their website (www.ozfishtv.net) or check them out on YouTube.