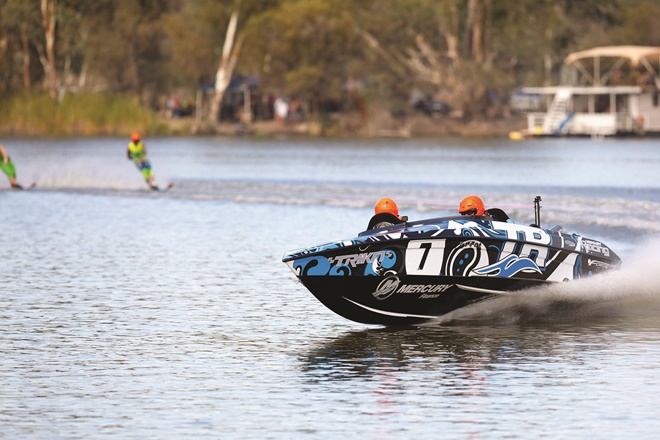 SKI racers powered by Mercury engines have taken out the top gongs in the 13th running of the Barrie Beehag Ski Race on the Murray at Moama.

In Superclass, it was a Gold and Silver thanks to Mercury Racing 1350 QC4V motor muscle. First across the line was the TR team of Ian Tricker, Nathan Miller, Reece Simmonds and Raymond Ball who took the 2018 Barrie Beehag Ski Race flag in a combined time of 22 minutes and 32 seconds.

They were just ahead of Pigs Arsenal – Chris Stevens, Mark Boyer, Sean Stevens, and Jack Stevens – which covered the two legs in 22 mins 48.

Then in the highly competitive Unlimited Outboard class, it was a Mercury trifecta. Top Gun F2 (Alex Handley, Jacob Nix, Adrian Nix, and Brendon Fogarty) pushed hard to beat the field and get home in 29 minutes 33. That was 27 seconds clear of Chosen 2 in second spot (Wayne Duggan, Andrew Hutchins, Emma Barnes, and Chloe Muus) with Mojo 4N (Daniel Steley, Matthew Thornton, Kyle Lingard and Alexander Watt) some 11 seconds further back in third.

All three boats were powered by Mercury 300 XS outboards.

Another great win came in the Under 18 Expert category with Hooligan, powered by another Mercury Racing 1350 QC4V, proving too good for the rest. John Grabiec, Jeff Marshall, Blaze Branson and Cameron Nix took the chequered flag in 26 minutes and 14 seconds.