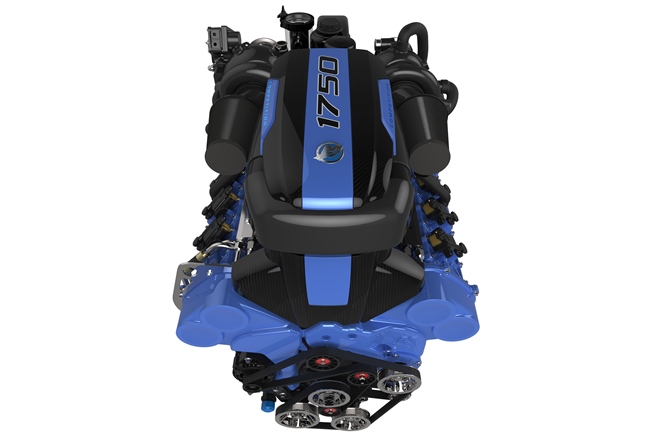 PRODUCING an astounding 1750hp, the QC4v 1750 Competition sterndrive is the most powerful engine ever produced by Mercury Racing.

The DTS system also features one-touch Smart Start and automatic throttle synchronisation. Zero Effort Digital controls provide an intuitive control experience – precisely signalling driver intent to the potent powerhouse. The 1750hp engine is close-cooled for more uniform temperature distribution with an all-new race-proven heat exchanger. Engine oil and glycol in the closed cooling system are routed around the engine via a series of tubes that are encapsulated in a casting filled with sea/river water which serves as a coolant.

Finally, the PCM drives Mercury Racing’s exclusive Engine Guardian System, which monitors engine functions to forewarn of possible problems that could lead to engine damage. This smart technology not only detects and alerts the boater of a problem, it also processes the data and reduces power to a maximum safe level that allows the boater to continue operation with lower risk of engine damage.

The drive and hydraulic transmission are designed to handle the 1750’s high torque and power levels. At the same time, the transmission, designed specifically for DTS, delivers smooth and consistent shifts.  The massive torque and power output of the new 1750 is transferred to the water via Mercury Racing’s Pro Finish five and six-blade CNC sterndrive propellers.

The 1750hp engine comes equipped with a 95A charging system, providing an ample supply of power for an array of marine electronics. Contact your Mercury Racing dealer for availability.