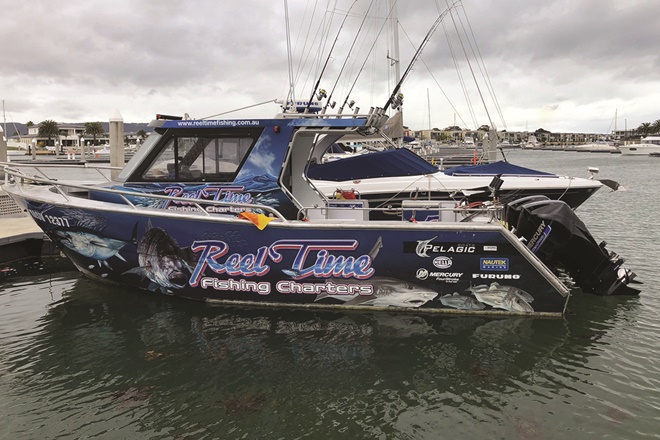 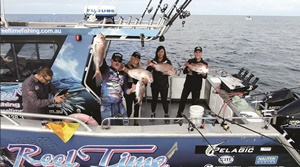 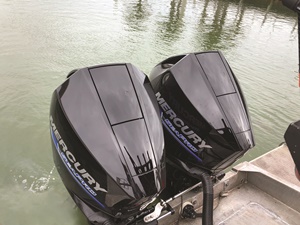 But then Matt Cini and his whole crew at Reel Time Fishing Charters are always flat-out busy, showing anglers the best spots in Melbourne’s Port Phillip Bay and surrounding waters. “Reliability for me is an absolute because my boats are in the water every day, and I can’t let people down,” Matt said.

Which is why he’s so pleased with his decision to repower his boat Jeffery with twin Mercury V-6 200hp SeaPro outboards paired with Enertia 17”, triple blade props. One of two boats in Matt’s fleet, Jeffery is an 8.5 metre aluminium centre cab built by Pelagic Boats to carry 10 guests and two staff, and which tips the scales at 4.2 tonnes fully loaded.

“These engines have done 200 hours now and, for me, they are absolutely perfect,” he said. “They have replaced a pair of 200hp Verados which I was very happy with but these are designed and built for hard, commercial reality. For me, I think the biggest thing is the torque. It speaks for itself. We load the boat up with 10 people and all their gear – call it an extra tonne – and it doesn’t make any difference. I’m very, very impressed.”

Matt knows how the SeaPros are performing internally as well as externally. “When they were serviced the other day the oil came out looking beautifully clean. It’s like the engines haven’t been working at all when they are actually out there all day, every day. The SeaPros have the huge gear box on them as well which is great from a commercial perspective because it’s got years and years of life in it.”

Tested in moderate to rough conditions, the SeaPros still managed to propel Jeffery to a top speed of 53 km/h at 5,200 RPM. The best fuel economy was recorded at 0.6 km/l at 4,000 RPM, giving the boat a range of 360km.

“The engines have settled in a bit since those initial tests and on a good day I know the fuel economy is better than that and I’m very happy with it,” Matt said.

The one-two combination of ample torque and low weight (220kg) makes these engines ideal for heavily loaded boats. The SeaPros’ commercial calibration meets commercial duty cycles, delivering more power with less engine stress. Further, they boast unmatched corrosion resistance with superior aluminium alloys and coatings plus four serviceable anodes, including one in the cylinder block. All to deliver an engine that works as hard as its owner.

“Going with the Mercury SeaPros was a great decision,” Matt said. “They are just fantastic. What can I say? I don’t have anything bad to report.”