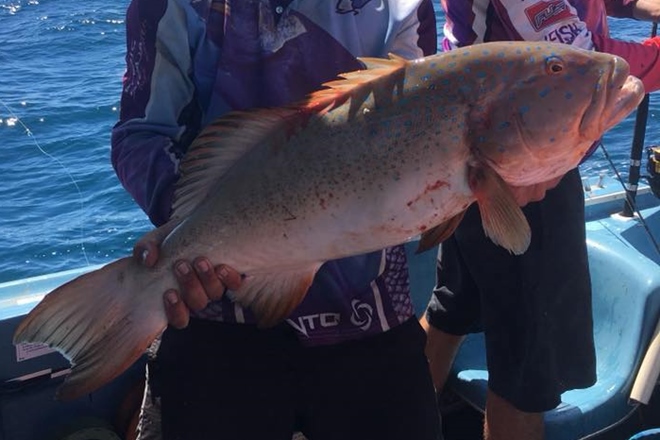 By now, I’m sure everyone around the Bundaberg area has seen enough rain for quite a while.  It will be great to have a mostly sunny weekend to let things dry out.

With flood warnings not expected to exceed minor flood levels in the Burnett and with the full moon on Friday night, along with some of the biggest high tides for the year, take care if you’re intending to have a fish this weekend.

With all the fresh water working its way to the mouth, the fishing has been surprisingly good in the Burnett.  We’ve had reports of massive threadfin salmon to 25kg.  Big barramundi, lots of trevally and some nice grunter and flathead were also caught this past week.

I personally would be concentrating my efforts around Burnett Heads where the water quality should be slightly better.

The lads who ventured offshore last weekend all reported catching quality mixed reef fish, including coral trout, red emperor, sweetlip and parrot.  Let’s hope the weather improves over the coming weeks and months so more locals can enjoy the fantastic mixed reef fishing the Bundaberg area has to offer.

The Elliott and Kolan Rivers are also a little dirty with local water run-off.  Word has it that there have been plenty of muddies and prawns in both systems.  On the sand flats in both of these rivers, big summer whiting always seem to bite well with the big tides around the full moon.

If you enjoy your freshwater fishing, Lake Gregory has been on fire this week.  Bass to 50cm are being caught on many different techniques from surface lures early, to casting soft plastics at schooled bass towards the deeper part of this awesome little impoundment.

The barra fishing at Lake Monduran has been a little tough due to the rise in water levels and constant changing winds, but in saying that, some nice barra are still being caught.  Maurice and Barry, two guys who have spent a lot of time on Lake Monduran over the years, have caught quite a few barra and bass over the past week.  The fat 83cm barra that Barry caught last Sunday morning was his fish of the week.