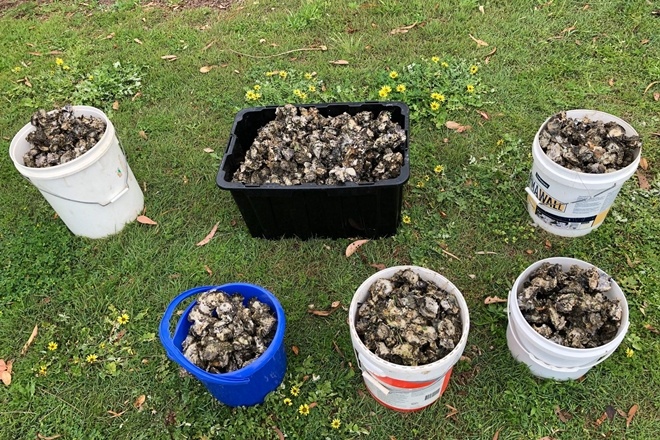 More than 4,000 oysters seized in Sydney area since September

Three major seizures of illegally harvested oysters have occurred since September this year while NSW DPI fisheries officers have been patrolling hotspot areas around Botany Bay.
On 11 September fisheries officers apprehended a man from Castle Hill NSW at Bald Face Point Reserve at Blakehurst in possession of 2903 oysters taken from the Georges River. In his company was a woman, also from Castle Hill NSW, who had taken 352 oysters from the same location. The woman was issued penalty notices totalling $1200 while the man is expected to appear in court charged with taking fish from closed waters, exceeding possession limits and failing to pay the recreational fishing fee.
On 6 October a man and a woman from Granville NSW were found with 294 oysters at Oyster Bay on the banks of the Georges River. Penalty notices totalling $1900 were issued to both for a range of offences.
And on 17th November a 54 year-old-woman from Cabramatta NSW was intercepted in mangroves at Kurnell after taking 474 oysters and 241 whelks from the Towra Point Aquatic Reserve in Botany Bay. This area is completely closed to the taking of shellfish. The woman was issued penalty notices totalling $1500.
In areas where they can be taken, oysters have a daily bag/possession limit of 50. The whole of Botany Bay and its tributaries including the Georges River is closed to taking oysters. The Georges River, along with many other waterways in the Sydney region, is closed to the taking of “shellfish” due to historical industrial pollutants in these areas and to preserve fish stocks. The Towra Point Aquatic Reserve protects one of the largest and most diverse wetland complexes remaining in the Sydney region.
Full details of fisheries closures in the Botany Bay/Georges River area can be found in the Sydney South Recreational Fishing Guide:
http://tiny.cc/k1ttsz
Report illegal fishing via the Fishers Watch phone line on 1800 043 536 or online at: http://tiny.cc/c7nmsz