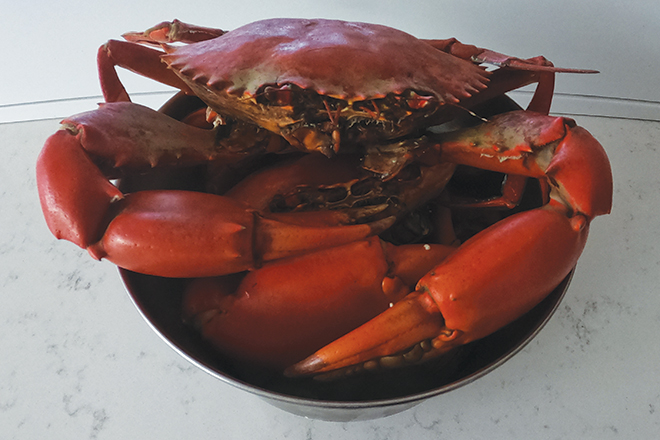 A couple of yummy crabs caught after recent rain.

Mud crabs on the move

The La Niña forecast for a wet summer throughout southeast Queensland has one big upside for anglers and that is mud crabs will be on the move. The crabs had already started to fire up after a lean early season, thanks to a lot of rain in late November and early December. Big tide and rain create a lot of run in the water systems and the rain creates a fresh, which gets the crabs on the move.

After a lot of rain though, the water goes from a discoloured brown to more of a chocolate brown, and is an indication of more turbid and freshwater mixed in. In these conditions, the crabs will be found in deep holes because the dense more saline water sits underneath the freshwater, which the crabs don’t like. Otherwise crabs will also be carried with a run-out tide and move close to the estuary entrances where the water is again more saline.

This should go without saying but unfortunately it needs to be said due to the prevalence of it. If you touch another person’s crab pot float and lift it, you are involved in criminal behaviour. That’s even before you touch or steal the contents. You are interfering with another person’s possessions. You wouldn’t like it happening to you, so don’t touch another crabber’s floats or pots – it’s simply un-Australian and the law will catch up with you.

Popular locations to catch mud crabs include around the entrances to drains and small creeks, up some of the bigger drains and arms of rivers and among mangroves such as those around the Moreton Bay islands. Another favourite spot is just off the edge of steep muddy banks, particularly under mangroves and fallen trees. And here is a tip that a professional crabber taught me many years ago.

When travelling along major creeks or rivers or the surrounds of mangrove-lined islands, pay close attention to the tree foliage at the entrance to some of the smaller channels and drains you can get your boat up. If you notice some of the tree foliage and branches are freshly broken – broken but still green – it means someone, including professional crabbers, has probably crabbed up there recently and may have caught the big bucks.

However, if you notice the foliage is unbroken or the broken bits are brown and dead, it means no one has crabbed up there for a while, so it’s definitely worth dropping your pots up there on a high tide and collecting them on the next high tide. Crabbing a bigger tide around a full and new moon also means you can get your pots right in among the mangroves or up some of the shallower drains and channels.

Finally, a favourite mud crabbing environment less crabbed than others perhaps are rocky foreshores and patches of rocks, particularly flat rocky plates interspersed among muddy bottoms. The crabs take up residence here in holes under the plates of rock. They can be found along some of the foreshore of Moreton Bay and also up a number of the local creeks.

Sean caught the fishing bug bad one very cold Canberra day 20 years ago when he was bored and picked up and read Angler's Almanac by the fireplace. Since then he has filled his mind with knowledge from fishing magazines, books, the internet, TAFE fishing courses, guiding fishing charters (estuaries, beach, bay and mountain lakes) and of course 'on water' experience. He and a group of mates formed a social fishing club and soon started to share what they learnt and caught online. Sean is the admin for Ontour Fishing Australia on Facebook, which is a page that shares information, reports and sponsor giveaways and welcomes all to the site. He plans to move into blogging on his new website when time allows.
Previous Moreton Bay tuskies and sweetlip
Next Decent hauls from dirty water