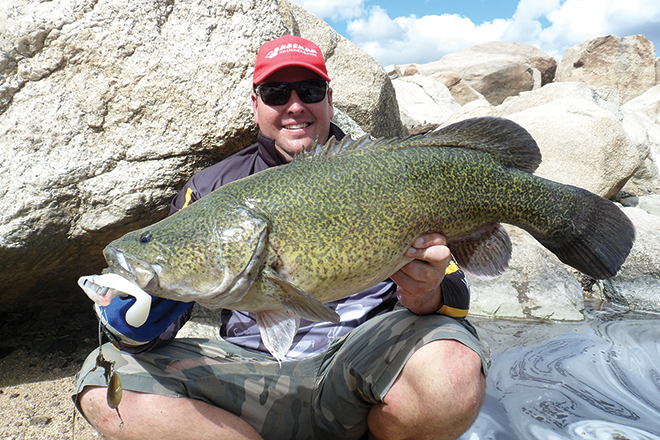 Nick with a healthy Copeton cod taken on a Zerek Flat Shad.

Murray cod off to a flying start

IT’S that time of the year when Murray cod fishing in the rivers and impoundments comes into its own as the weather and waters cool. Many anglers are already off to a flying start with numerous great captures.

Copeton Dam near Inverell still holds onto its reputation as Murray cod mecca and it is well and truly Australia’s premier Murray cod impoundment. Whether it be surface fishing, trolling, chucking spinnerbaits and lures or setting a few grubs overnight, it is cod capital and the number of huge Murray cod that occupy this fishery is staggering.

Copeton has always been known as a go-to cod fishery, but up until a few years ago it wasn’t the place it is today. Thanks to social media and advertising as well as some high-end lure makers, not to mention the pro anglers using their gear, Copeton has become a household name.

Much like the rush to the northern barra impoundments to chance a hand at that holy grail metre-plus barra, Copeton is following suit, with its metre-plus Murray cod bringing anglers in from all corners of the globe. To add to the craze of this fishery, the surface action is almost unbelievable. There are very few dams, if any, that can produce statistics comparable to Copeton, and a number of its biggest trophy fish come off the top.

When the green fish are in full swing at Copeton, it’s near impossible to pick up a magazine or scroll through Facebook or Instagram without reading about someone catching the fish of a lifetime or getting their butt handed to them at Copeton. It truly is an amazing fishery.


With Copeton open to anglers 12 months of the year with no Murray cod closed season, the economy it generates through the fishing industry is massive. Lure makers are working overtime to keep up to Copeton’s demanding anglers and the monster fish that will happily straighten your trebles or cause some form of damage to your lure.

Copeton has found itself in the middle of a swimbait craze in the past 12-18 months and the number of specialty lures and rods now available to anglers is staggering. Just about every lure manufacturer is having a crack at the phenomenon to cash in while the craze lasts and it certainly doesn’t look like dampening any time soon.

The Zerek revolution continues
As you would have seen over the past couple of years, we’ve brought great stories and information to you regarding the Zerek range of lures distributed by Wilson Fishing. The standout lure of Zerek’s excellent range is the Flat Shad, which has taken the barra industry by storm and is now high up the ranks as a go-to soft lure for Murray cod.

We’ve seen great fish pulled in on these lures in the rivers and impoundments in the past 12 months and with several new and exciting colours about to be added to the range, the fishing is only going to get better. Hot new gear from Century Yuasa Batteries

Century Yuasa Batteries makes hands-down one of the best batteries you can buy, and now the company has gone one step further and released an awesome new smart charger to keep your batteries in top shape. The all-new Century CC1206 is a 12V, 6A, nine-stage intelligent charger that will charge batteries up to 120Ah and maintain batteries rated up to 180Ah.

It boasts three charge settings: 1A, 3A and 6A. The CC1206 is a great choice for all your battery charging needs, whether it be trying to bring a heavily discharged battery back to life or just keeping those batteries in your boat topped up after every trip and giving them a hit before you head out.

If you like to leave your chargers plugged in all the time while in the garage for that peace of mind on-water performance, this great unit has an eco-power mode that uses minimal power to keep your batteries maintained. Even for those times when you may accidentally hook the terminals up the wrong way (we’ve all done it), don’t be worried, as the charger won’t let you do any damage, rather the unit will simply activate its fault light.

For about $150, this charger presents a cost-effective way of maintaining all your batteries, which are a vital investment with today’s demanding electronics. To view great tutorials and find more information, visit centurybatteries.com.au

For any further information regarding this month’s article or any previous, please don’t hesitate to give us a like and contact us via our Wells Brothers Fishing – Official Facebook page. If you’re on Instagram, be sure to add us @wells_brothers.

For any more information on Zerek gear, jump on wilsonfishing.com.au