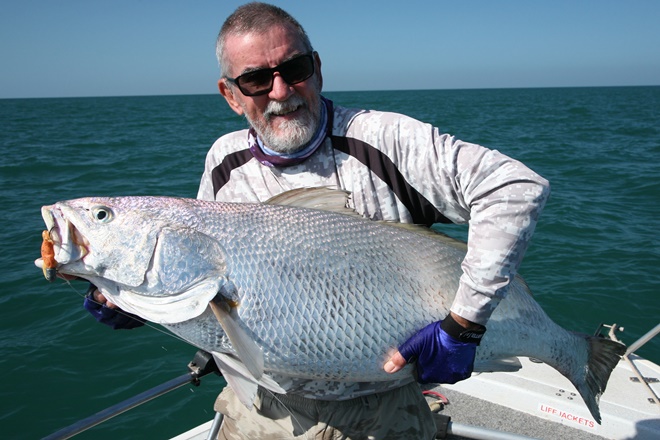 Landing a big black jewfish like this beauty is something to be savoured and long remembered – you can tell by the smile on the author’s face! This 18kg jewie grabbed a Berkley Squid Vicious plastic in 8m of water adjacent to a bauxite reef south of Weipa and was successfully released after a photo or three. A growing Asian market for swim bladders is currently threatening to decimate our mulloway and black jewfish stocks.

Here in Queensland, our two major species of jewfish stocks are ‘well endowed’ in the swim bladder department, to the extent that their stabilising organs are now suddenly worth many times the value of their fillets. The rush to harvest this new ‘marine gold’ has led to a massive increase in the targeting of these species, up from two tonnes per season a couple of years ago to a current level thought to be at least 10 to 30 times greater.

The reason catch statistics are so vague is allegedly due to a massive black market in swim bladders being bought for cash by ‘collectors’ who then export their product into Asian countries. These buyers are rumoured to be paying more than $500 per kilo for dried bladders and their major supply is coming from black jewfish caught in central Queensland coastal waters from Gladstone to Bowen. With metre-long jewfish producing about three swim bladders to the kilo, any areas where these fish aggregate are now being relentlessly targeted by fishers in search of quick bucks.

Reports from concerned fishing activists indicate most of the fishers involved in the bladder trade have no regard for bag limits or regulations and carcasses are being dumped once the bladders are removed. Private surveillance has revealed at least some of those involved are licensed commercial fishers, but few are selling their product via the open market. This information has been passed on to Fisheries personnel but at the time of writing has yet to be actioned.

At least one incident in the Mackay region saw the secure area around the Hay Point loading wharf breached by fishers illegally targeting black jewfish, causing a very costly delay in loading coal ships. The perpetrators were apprehended and now face ‘terrorist’-type legislation and huge fines.

Further north at Cape Hillsborough, a local business operator observed what he described as “the lights of boats off the headland looking like Sydney Harbour on New Year’s Eve” during good weather in a known jewfish spot. In both instances, the lure of making big money seems to be the motive rather than the thrill of catching a trophy fish.

Queensland is currently in the middle of a Fisheries reform process that is supposed to be moving our state towards much-improved management and has a goal of a return to a minimum of 60 percent of original fish stocks. Fisheries Queensland has known about this controversial new practice and its potential to crash our jewfish populations for some time now but any reaction to the problem has been painfully slow.

Their only move was to refer the matter to the East Coast Net Committee for review, an option that, on examination, appears to be of questionable value. Concerned fishers are asking why information passed on to staff concerning the widespread black market practices wasn’t quickly followed up by enforcement officers, and the offenders, both from the fishing and buyer sides, apprehended and put through the courts.

This would have nipped the escalating practice in the bud, helped to preserve valuable fish stocks and served to keep the practice both visible and controllable. The income of bona-fide commercial fishers would have been protected into the bargain, which is surely the major aim of Fisheries Queensland. Instead, our fishery now has a serious problem that has the potential to get much worse and possibly cause irreparable damage to our jewfish populations. Further procrastination and inaction will only exacerbate what is basically an out-of-control situation.

All this has led to implications that the lack of ‘hard’ enforcement by Fisheries personnel has been brought about by a reluctance to admit that licensed fishers are significantly involved in a widespread black market operation – thereby tainting the reputation of our commercial fishery. Unfortunately, a number of controversial enforcement incidents over the years seem to support such internal interference in the regulatory process.

In this current atmosphere of fisheries reform, now is definitely not the time for the department to allow such insinuations to be aired. Queensland has long been criticised as running a long last in fisheries enhancement, a reputation it needs to repudiate by taking a tough stand on illegal activities, whether they involve commercial or recreational fishers. Our commercial fishery must not only be sustainable but ‘clean’ as well.

Any protection or tolerance of wrongdoers robs honest operators of their livelihood – and these are the commercial fishers Queensland needs in its industry. Those of us who care about the future of our fishery must be vigilant in ensuring this kind of greedy exploitation of our fish stocks is stopped in its tracks. If you see what you think is illegal activity, collect as much information as you can and pass it on to the Fishwatch hotline (1800 017 116) as soon as possible. In this era of modern, multifunctional mobile phones, fishers have the ideal tool to record such incidents.

Patrol officers are spread very thinly around our coastline, so they need all the help we can give them.

To learn all about Dave Donald and his career as a fishing writer, click here!