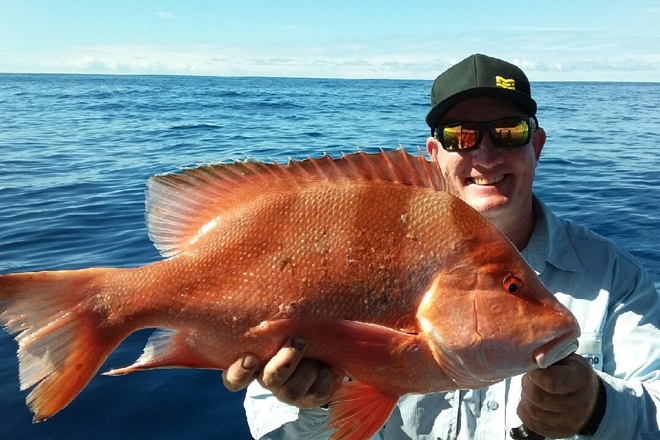 Dale Smith with the red emperor he caught off Bundaberg on his last trip out.

Once again, it’s only a couple of weeks until Christmas.  Hopefully everyone can get a bit of time off work and enjoy what the Bundaberg region has to offer at this time of the year.

Luckily enough, the forecast came good last Saturday.  The boats that ventured out that bit wider all reported landing plenty of quality reef fish. Both the Herald Patches and Warregoes produced the goods with some nice red emperor, redthroat emperor, coral trout, grass sweetlip and parrot making their way into the ice-boxes.

Although we desperately need some rain around Bundaberg, the Burnett River is still producing the goods for anglers willing to put in a few hours.  Plenty of nice flathead are hanging around the bases of most of the rock walls.  Mangrove jack have also been very active this past week and have been caught on soft plastics as well as baits like mullet fillet and fresh prawns.  A few big grunter over 60cm have also been keeping anglers entertained recently.  Some nice muddies were on the move last week, so putting in a few pots this weekend should be well worth a crack.

Both the Baffle and the Kolan systems are generally busy at this time of the year.  The stand-out capture has been the mangrove jack.  Anglers have been smacking them at all stages of the tide.  The stand-out plastic has been the Zman 4-5 inch Diezel Minnowz rigged on either a conventional jig head or weedless with a SnakelockZ jig head system.  There has been plenty of by-catch while chasing mangrove jack, including grunter, flathead, bream and estuary cod.  Sitting on the deeper holes at night with livies or mullet fillet has been very effective as well for big jacks.  Some nice summer whiting have been caught around the many sand bars with yabbies and beach worms unbeatable as bait.

It’s awesome to see so many people back at Lake Monduran trying to land the Bundaberg Toyota Golden Barra.  You can register for this competition and find out more on the website at https://www.goldenbarra.com.au/     Plenty of barra have been caught early morning and late afternoon in the shallow windward bays.  During the middle of the day try casting Lucky Craft Pointer and Jackall Smash Minnows through the treetops in the deeper water where the barra will find the water temperature more comfortable.

Fish with confidence and good luck on the nice red emperor.