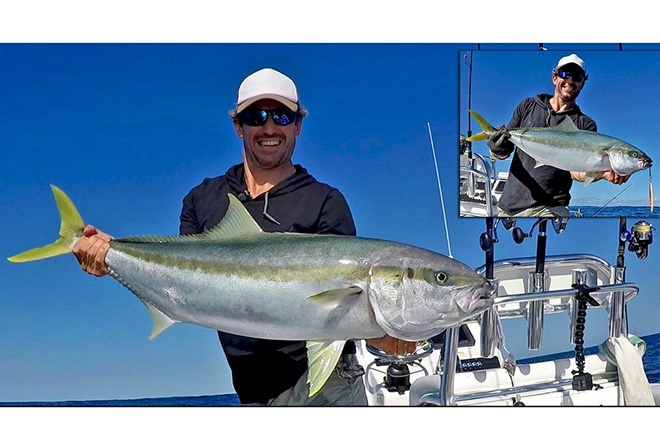 Dave Leonard got ravaged by some big kingfish at The Hards around the full moon. He managed to get a couple to the boat. One on a jig and one on a strip bait of bonito. Photo: www.fishingnoosa.com.au

Well we saw some great storms and more rain at the start of the week, which topped up the rivers and has finally carved out a bit of channel in the Noosa Bar. This has allowed most to get offshore as the swell dropped as did the winds. The swell was still too big for smaller craft and it was those boats that did particularly well on the reef fish in close.

Sunshine Reef and North Reef produced snapper, cobia, maori cod, pearl perch, solid coral trout and of course some chunky grassy sweetlip. These fish always show up in good numbers after a good flush out.  They can be caught on a wide range of baits and will also take a well presented 5 inch jerk shad plastic on 3/8th jigheads with 20-30lb leader. Also not often used offshore are the larger paddle vibes from Fish Candy and Zerek. These lure have a huge amount of vibration and will call up a huge range of species. These often out fish bait so be sure to give them a try. Mid water fish like cobia and big snapper will chase these slower falling lures and smash them before they hit the bottom.

Further out wide the charters that hit Double Island were rewarded with standout snapper, pearlies, scarlet sea perch and cobia. These fish all taking baits on double paternoster rigs with flesh baits, pillies and squid as bait. If headed out wide it is always a great idea to ensure you have a pilchard floater out the back or even a lightly weighted curly tail plastic in the 4-6 inch range. Much like the big soft vibe these baits will often get picked up by a passing pelagic or big snapper.

The surf has been going great with all the usual suspects getting caught in close between Northshore and down as far as Yaroomba. If you have heavier gear and can get a big cast you can expect to pick up the odd jewfish, tailor and even sweetlip reported off the beach. The tailor are running so ball sinkers with gang hooks and pilchards are the go during the evening. For owners of lighter gear find a gutter and drift out lightly weighted baits and wait for the bite. You can expect to land whiting, bream, tailor and dart.

Away from the beaches the Noosa River has started to wake up after the flush of fresh. We have seen a few mangrove jack getting caught on live baits and fresh dead baits. Lures of choice are soft vibes and hard body lures like Jackall transam, Jackall squirrel and Atomic shiners all worked around the rocks and bridges of the lower estuary. Still around the lower estuary Woods Bay has been holding small jewfish and tailor. The tailor are hitting surface lures on the early morning high tides and will hunt down bigger Cultiva Zip”N’Ziggy and Atomic K9 walkers. These lures also work very well on trevally and small queenfish that are usually found when the tailor are feeding hard.

If after whiting then stay around the dog beach and frying pan and for the land based angler the river mouth on the turn of the tide is a must. The best baits are fresh beach worms fished on light worm hooks with a pea sized running ball sinker. If using lures then small surface poppers like the Bassday crystal pop and River2Sea Bubble pop 45 are a few great options when fished with 6lb leader.

Freshwater has started to fire up with some great fish taken from both Lake MacDonald and Borumba. Still down deeper the bass are hitting blades and vibes like Ecogear ZX blades and Jackall TN60’s. Off the top the saratoga and bass are hitting well-presented surface lures including frogs and cicadas. Be sure to be quiet and patient if you want to land the big ones. Have a big net ready and get ready for the big jumps!!!