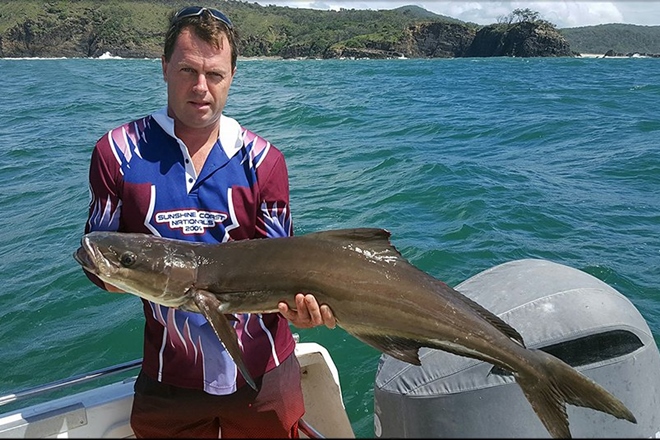 David Ohl from Bli Bli with his cobia. Photo: fishingnoosa.com.au

Noosa the place to be over Easter

Noosa is looking great for the Easter break and if the weather plays the game we should see some sensational catches. Even though swells are predicted to be up hopefully we may see some of the bigger craft able to cross the bar. The reefs were firing prior to Easter, with Sunshine Reef producing some fantastic Longtail tuna, Mack tuna and Spanish mackerel, while from the bottom we saw squire, moses perch, fantastic coral trout, and sweetlip.   Small metal slugs and micro jigs have been working well for the tuna, with the odd fish being caught on floaters. Mackerel have been taking live baits, floaters, trolled pillies and hard body lures like the Samaki Pacemakers. If you are chasing those coral trout you need to make sure that your baits are getting as close to the reef as possible so a no 10 ball sinker right the way down to the hook will put you baits right in the strike zone.  If the weather plays the game a trip to the Barwon Banks should be worthwhile, with great snapper on the high tide, sweetlip, pearl perch and some big jew all on offer. By all reports there has been a fair bit of run so the bigger sinker are a must. North Reef should also fire with good numbers of spotted and spanish mackerel. A good berley trail will help to keep the fish around the boat, cut up pillies are your best bet. Reefies should also been on the chew with pearl perch, tusk fish, squire, cod, and jew, all hitting the decks.

In the river we have seen some great fishing with the bread and butter species like whiting, bream and flathead all taken along the Gympie Terrace stretch. This has to be one of the best stretches of river on the Sunshine Coast, with plenty for the kids to do over the Easter break as well as lots of fish on offer. Keep you hooks small, size 4 and sz 6 hooks are perfect for catching these species.   Woods Bays has had some great mixed schools of trevally including giant, big eye, tea leaf and golden trevally all responding well to micro jigs, blades and prawns profile soft plastics. There have also been good sized bream on off with small pillies and strips of bonito working well. Around the Frying Pan whiting have been the main target with good numbers and quality fish being caught on live worms, yabbies, surface lures and even Crab profile soft plastics.  Flathead have been in great numbers in the river with some great fish taken down towards the mouth, these fish lay in wait for passing bait fish as they make their way in and out of the river. Working prawn profile soft plastics like the Shrimpz from Zman or the new flick Prawn from River2sea and small bait fish profiles has seen some great sized fish landed.

On the beach there have been some great sized swallow tail dart with the area north of Teewah on Noosa’s North Shore really firing, if the wind plays the game the early morning tides will be the best bite. For the night anglers the time from sunset to moonrise will be your best bet for a large tailor or jew. Bait to tempt that elusive jewie is, fresh mullet, bonito fillet, local squid or large clump of beach worms. Don’t forget your permits if you are heading up to the Noosa North Shore. On Noosa’s Southern beaches the area around Peregian and Marcus Beaches has been good for whiting and the locals tell me the run out tide is the best bite. If you are thinking of heading out to the rock at Noosa National Park be cautious as there are some bigger swells forecast.

On the freshwater scene, Lake McDonald has been producing some big bass around the weed beds that line the edges. Poppers cast at these areas in the early morning and late afternoon have produced some outstanding Bass. 3″ plastics in curly tail worked deep have also been successful in finding the schooled fish. Small Saratoga have been taken in Lake Borumba on surface walkers. Bass have also been active in the upper reaches around the trees, and at the start on the Kingham arm. Jackall Squirrel hard bodies, and Bassman Spinnerbaits worked slowly with big pauses has been really working well.

Now for all the  latest information log onto www.fishingnoosa.com.au for up to date bar and fishing reports, don’t forget to drop into Davo’s Tackle World, Davo’s Boating and Outdoor in Noosa and  Davo’s Northshore Bait & Tackle at Marcoola to find out where the fish are biting, and remember Tight Lines and Bent Spines over Easter!