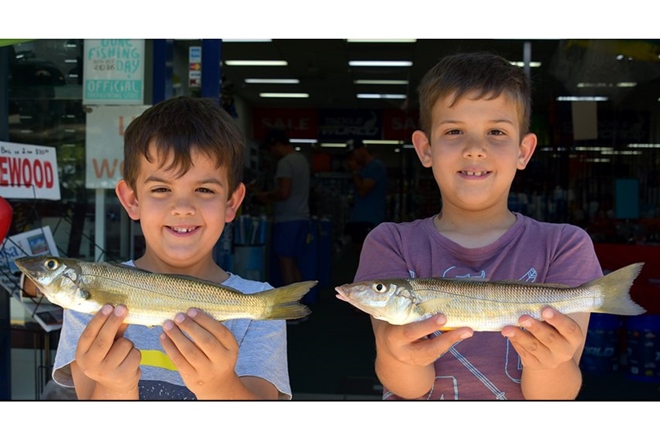 Jake and Bayley Scott-Holland with a couple of 30cm whiting they caught near the Noosa Yacht Club on Sunday. Photo: www.fishingnoosa.com.au

In the Noosa River we are seeing some huge whiting, places like the Noosa Dog Beach, Frying Pan and Weyba Creek have been the pick of the locations. Freshly pumped yabbies have been the baits of choice but if you can get hold of some soldier crabs, they are also prime baits. The stretch of water between Lake Cooroibah and Lake Cootharaba is holding good numbers of mangrove jacks with this warmer weather we are experiencing lately. Trolling deep diving lures around this area is probably the easiest way to snag yourself a decent jack. If you want to give this form of fishing a try, lures like the Strada 90mm Dredge can dive well over 3m and are equipped with extra strong hooks are perfect for these red fish. There have been some solid flathead around Weyba Creek lately, with a lot of the fish being caught on soft plastics that imitate a small prawn. The new Zman Ez ShrimpZ have been a real hit they come in a great range of colours as well as being rigged or unrigged.

On the offshore scene; Long tail tuna numbers are starting to improve lately, with Laguna Bay holding plenty of these fish. Sunshine Reef is also fishing well, and if you fish there during the low light periods (early morning/late afternoon) you are in with a good chance of landing a bag of good sized snapper. There’s also been plenty of reports of sweetlip and even the odd coral trout from the same area.   For those wanting to venture out a bit further, North Reef has been loaded with nice jewies and snapper. There’s also been plenty of pearl perch getting caught here too.

On the beach; Noosa North shore has been a popular destination lately with plenty of good sized whiting scattered throughout the many surf gutters that this area holds. The top of the North Shore, Teewah to Double Island has seen some great tailor landed with the evening fish the most productive.   To the south the beaches around Coolum and Peregian have been popular lately too, with some big dart and whiting getting caught here as well.

In the freshwater; Lake McDonald is fishing quite well at the moment with the bass starting to move away from the main basin and up towards the many arms and creeks this area is famous for. This provides a perfect opportunity to jump in a kayak and work those snags that only a kayak can get into. Borumba has also been fishing well around the many arms of the lake. There’s a good mix yellow belly and bass in these areas, especially when fishing around some sort of structure like fallen trees. There’s also the added bonus of some nice sized Saratoga from these areas too, with small surface lures being the main drawcards.

Noosa Yachtie Fishing Club are running a Youth fishing Clinic on the Noosa River bank near the river stage. The one hour fishing lesson is $5/child per child and will teach all the basics of fishing. The clinics include all gear and bait plus a show bag as well as a sausage sizzle and drink on completion. Entries are at Davo’s Tackleworld and the clinics are being run on Saturday and Sunday mornings October 22nd and 23rd. There is also a raffle at $1 a ticket with some great prizes on offer including Bunnings Vouchers, Meal vouchers, tackle vouchers as well as meat and seafood vouchers.