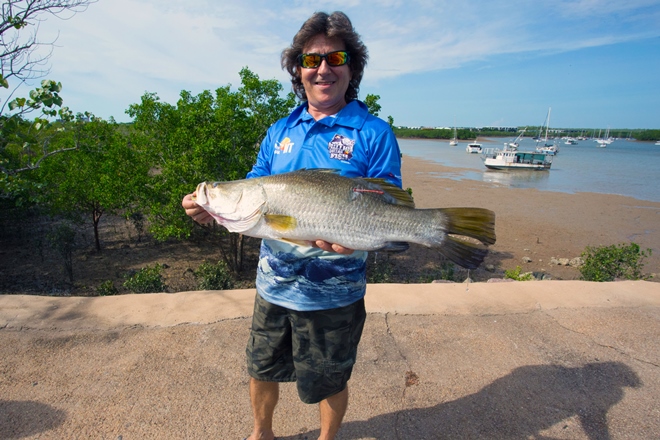 Kurt Baumann, the latest winner, also took home $10,000 last year during the inaugural campaign. Kurt, a local youth worker, caught the fourth $10,000 prize-tagged barramundi while out fishing solo in his own backyard; where he lives at the Daly River.

The 32-year-old, whose catch was 72cm when tagged, was also one of 10 Million Dollar Fish Season One winners – making his total prize winnings from the competition $20,000 so far.

“I wasn’t sure the barra was a winner at first, so I kept on fishing for about 20 minutes before checking for the tag,” Kurt said. “When I saw it, I got really excited and called my partner straight away. I wondered if I was seeing clearly.”

Kurt, who goes fishing about twice a week, said he’d entered the competition to have “a bit of fun with the boys” as some friendly family rivalry. “We thought we’d see who could catch a winning barra first,” he said. “I love fishing in the Territory because of the great scenery and warm weather – it’s a good way to bond with the family.”

When asked how he would spend his winnings, Kurt said: “I’ll see what my partner thinks – she may want to go shopping!” He spent last year’s $10,000 on paying off bills and fixing up his car. Kurt’s tip for catching a prize-tagged barra is to use a soft plastic lure and get involved! “There are more chances to win this year, with more fish in the water,” he said. “You never know, I may win a third.”

The fish are among the 101 prize-tagged barramundi released in Top End waters on October 1 for the campaign. While one of these fish is worth $1 million, 100 of them carry a $10,000 prize tag – leaving 97 prize barramundi still at large.

The second season of Million Dollar Fish, which ends on February 28, 2017, builds on the success of season one, where 10 prize-tagged barramundi worth $10,000 each were caught in Darwin Harbour, Daly River, Corroborree Billabong and Bynoe Harbour. The first season attracted more than 43,000 registrations from 62 countries, including 25,800 people from interstate and 14,600 Territorians.

The Northern Territory’s Minister for Tourism and Culture, Lauren Moss, congratulated Kurt on his second win and said, “The Million Dollar Fish challenge makes now the perfect time to book that must-do trip to the tropical Top End – where you can soak up our five-star sunsets and experience our outdoor adventure, unique wildlife and multicultural cuisine.” “We know that fishing in the Territory is an unrivalled experience, and the chance to catch an iconic NT barramundi worth $1 million is the icing on the cake. With 97 prize-tagged barramundi still in Northern Territory waters, I encourage competitors to fish far and wide this season and visit one of our many spectacular regions.”

CrownBet CEO Matt Tripp was stunned and excited to be told of another red tag recapture at the mighty Daly River. “Congratulations to Kurt and what a stunning result,” he said. “Million Dollar Fish is now certainly the most iconic fishing and tourism event in Australia. Get to the NT to stay, play and fish.”

In addition to the prize-tagged barramundi, registrants for season two are also in the draw to win $96,000 worth of prizes, including five HelloWorld holidays to five different regions in the Northern Territory flying Qantas, a Jayco Camper Trailer worth $30,000, Engel fridges, Shimano and BCF fishing tackle, JMGilles Classic Lures, Accor Hotels for Le Club points, Qantas flights, XXXX GOLD cartons and a fishing charter. All sponsor prizes are being drawn monthly up until February 2017.

A number of destinations throughout the Territory’s Top End offer anglers a chance to hook a prize barra, including the Darwin area, renowned for its unspoiled coastlines and easy access to bluewater fishing. Only 80km north of Darwin are Bathurst and Melville islands, known as the Tiwi Islands, where estuary and bluewater fishing are popular options. The remote regions of Arnhem Land and Kakadu to the east provide a variety of first-class fishing opportunities with scenic inland billabongs, mangrove-lined estuaries and pristine shoreline. Further south, Katherine is a great base for some of the Territory’s best fishing areas, such as the picturesque Victoria River region to the west, the Daly River to the northwest and the Roper River and Borroloola region to the southeast.

For more information and to register, visit www.milliondollarfish.com.au