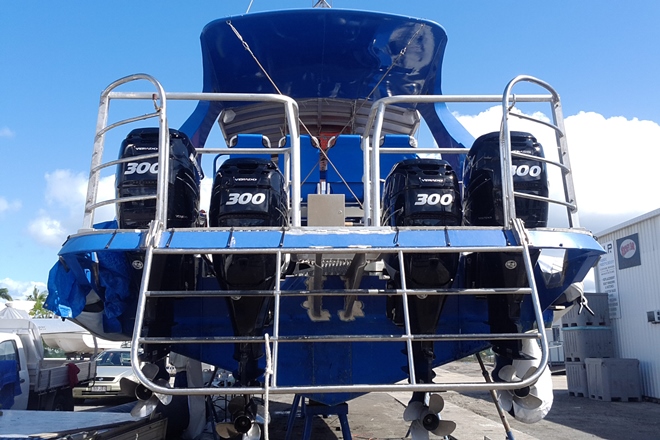 IT’S all smiles in Cairns with a 300hp Mercury FourStroke Verado quad-repower lifting a well-known tourist attraction to a new level of excitement.

The 15m, 12-tonne Thunderbolt is now faster, more manoeuvrable and just white-knuckle exciting with its four new supercharged FourStroke Verado engines giving it a top speed of 40 knots and the ability to turn on a dime. The quad-repower – the first of its kind in Queensland – is the proud work of Gus Bonner and the crew of Aussie Marine. 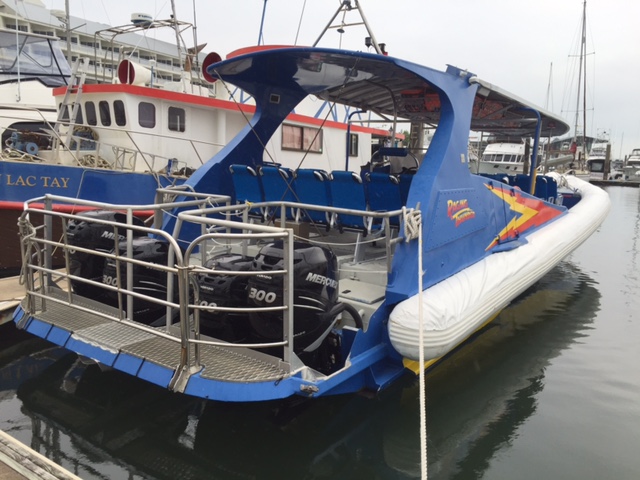 “I had some sleepless nights over the engine positioning because it was quite a technical job getting the four engines correctly positioned to work together to deliver the maximum performance,” Gus said. “So when the first run went as clean as a whistle, I was pretty relieved. It couldn’t have gone better”.

And Gus wasn’t the only one smiling. Thunderbolt’s owner said it was “the smoothest commissioning of any of the boats in his operation”. Built originally with two diesel inboard engines, Thunderbolt was later fitted with four 250hp (non-Mercury) outboards. These engines limited manoeuvrability and left the driver wrestling with two sets of controls.

“The boat had been really hard to handle,” Gus said. “But by fitting the engines in the correct position and using Mercury technology, we’ve fixed all that and the driver is raving about the huge improvement. Previously, in a turn, the outside engines would lift out and over-rev. That doesn’t happen now, even though the FourStroke Verado motors have a tighter turning circle.”

Gus said the two inside engines are master engines that control the two on the outside. “So if an outside engine lifts and starts to cavitate, the engine on its inside automatically holds the revs down, and all four engines can be controlled through just one handle if required,” he said. “I think the driver said it was 150,000 percent better – which is a fair bit.”

Another huge improvement is Mercury’s Trim Control, which lets the driver quickly and easily raise and lower all four engines when Thunderbolt is faced with the waves often found around Fitzroy Island and other local destinations. “In the first trial we ran 15-pitch four-blade Evolution propellers and reached 68km/h before we hit the limiter, so we then put on the 17-pitch and reached 75km/h at 6250 rpm,” Gus said. “That’s more than 40 knots for a boat that weighs 12 tonnes, so I think all those tourists are going to have smiles on their faces as well.”

Gus had no hesitation going with Mercury and the legendary Verado. “Put it this way, in my experience if Mercury does something, it does it well,” he said. “There’s 75 years’ experience behind this technology. The FourStroke Verado engines are quieter, they have the power, they have an intercooler, and there’s no valve adjustment needed, which is a big plus to reduce maintenance when you’re running an engine for 2000 hours every 18 months.”

Which is why Gus took the opportunity to show off the repowered Thunderbolt. m“We took a potential customer out on the boat, someone who’s already tried the two major competitors to Mercury, and he was astonished by how much quieter the 300 Verados were,” Gus said. “He was so impressed he called the following day to put in an order for three brand-new 350hp Verados!”

Thunderbolt is owned by Raging Thunder Adventures, a premium adventure tourism provider in far north Queensland. Along with the opportunity to go white water rafting, hot air ballooning, canyoning and island hopping, adventure-seekers can now go on a white-knuckled extreme ride on this 15m RIB.