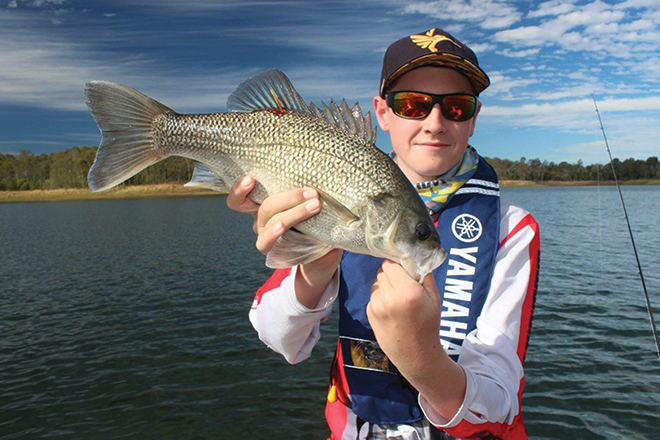 THE past month has certainly been eventful. School holidays allowed me to get out for a couple of local trips. In late June I participated in a Suntag Australian bass tagging day at North Pine Dam.

You normally need a permit to access some areas of this dam but during this particular weekend Suntag members were able to fish the entire dam between 6.30am and 4pm. I teamed up with gun fisherman Liam Fitzpatrick for the day and met with him at 4am on a chilly Saturday morning.

My Sea Jay 370 Creek Masta entered the water two hours later and we collected our tags and recording sheets and waited for the go ahead. I had a casual flick off the bank while watching the sunrise and a little bass decided my Z-Man Slim SwimZ looked like a good breakfast.

So that was the first one for the day, and to catch it in front of about 100 people was pretty fun. Liam had done a fair bit of fishing at North Pine Dam, so I was confident we would be able to tag a few. We made a beeline for a deep weed edge with some vertical timber on the drop-offs.

Liam told me we had a chance at a big bass along here. I stuck with the plastic that had produced earlier that morning and managed three bass. In the same time, Liam had captured five fish on vibes, one of which was a 48cm model. By this stage the sun was really getting up, so we decided to troll to another spot.

We picked up a decent bass by trolling over an old creek bed in about 15m of water. The next spot presented a similar scenario to the first location, with deep timber on a weed edge. I switched to a Zerek Fish Trap 65mm because Liam was really starting to get some numbers using little shrimp-imitation vibes.

On the first cast I managed a 38cm fish and was happy with my new PB, but it didn’t last long. A few more fish were caught at this spot before we decided it was time to move. We found more structure down deep and could see fish holding off it.

After pulling four fish out, one being my new PB at 48cm, they went quiet, so we decided to troll again. We hooked several really good fish on the troll but it was slow work as we made seven trolling passes over an old creek bed for eight bass.

As we were sounding around I noticed another boat achieving constant double hook-ups. We drove towards the boat and my Humminbird Helix 7 SI began to show schools of bass. There would have been at least 100 fish per school. I quickly dropped in my Minn Kota iPilot and hit ‘Spot-Lock’ on the remote.

Being in 15m of water and with the fish schooled up so thickly, I thought a micro jig might be worth a go. I hurriedly tied on a Zerek Step Slider 30g jig in Chartruese colour and dropped it over the side. It got smashed as soon as it hit the bottom and line started smoking off my Daiwa Aird baitcaster.

I began cranking hard and my rod was doubled over. Eventually a beautiful 43cm fork length fish came to the surface.
I hadn’t caught many fish on micro jigs before, so I was stoked. The next two hours were a blur of fish coming on board.
Most times, as soon as my jig hit the bottom it was smashed.

If that wasn’t the case, one or two short, sharp lifts of the rod tip were enough to get a fish on. They were so thick that at one point as I was burning my jig to the top because I thought it was tangled, a bass hit it as if it was a mackerel.

The school disbanded, so I let fly with my Slim SwimZ and it was smashed on the sink. After 10 minutes the bass came back together and were straight back on the jig. With the fish still biting it was time to head home.
What a cracking day!

Liam and I tagged a total of 75 bass and also captured two catfish. I was running three setups on the day. For the vibes, I was working a Wilson Rack Attack 6-12lb spin rod paired with a Daiwa Ballistic EX 2500; for the micro jigs and trolling I was using a Wilson 4kg Live Fibre Territory Barra matched to a Daiwa Aird baitcaster; and for casting plastics I chose a Wilson DAM 8-15lb spin rod and Daiwa Freams 2004. I was using 6lb and 10lb braid matched to 10lb and 14lb leader.