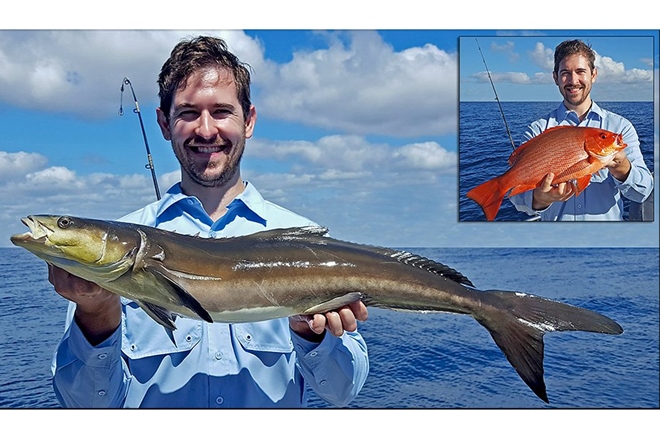 David Hofer from Brisbane with a cobia and small mouth nannygai. Photo: fishingnoosa.com.au

With offshore conditions not that favourable last week, anglers left their run a little later in the week in the hope the winds and swells would drop, those that have ventured across the bar have stayed relatively close as there has been limited weather windows. Starting with North Reef, anglers who’ve braved the offshore conditions have returned pretty good results, landing cobia, spotty mackerel, venus tuskfish, pearl perch, moses perch, snapper and hussar. Sunshine Reef also produced similar catches with the added bonus of coral trout. Fishing size 10 ball sinker on a running sinker rig, using a 5/0 octopus hook loaded with local squid has been the ideal bait.

Jew Shoal and Hall Reef have also been firing with cobia, spanish mackerel, spotty mackerel, sweetlip and cod. Lightly weighted ganged hook rig loaded with a pilchard, gar or sauri have worked well, you may also like to give the Davos’ Spanish Special rig a go, these rigs were developed especially with spanish mackerel in mind and worked through a good burly trail have been dynamite. If the offshore conditions come good this week anglers will again be out in force sight casing for mackerel and tuna with slugs like the Arma Radico and River2sea Sea Rock slugs.

In the Noosa River, flathead have again featured with the lower sections of the river producing some great fish on the outgoing tide, smaller baits like frog mouthed pilchards, whitebait and hardy heads on small ganged hooks have claimed some good fish, soft plastics have also been deadly with brighter coloured soft plastics like the Fuze Triple Tails and the new Squidgy Bio Tough getting results. Mangrove jack have also been present near the river mouth rocks and up toward the sand bags on the dog beach, the outgoing tide at night has been the prime time with live baits doing a lot of the damage. Soft plastics like the Zman Swimmerz and River2sea Chasebaits have also gotten the job done.

Good sized trevally have been around the river mouth, Woods Bays and the Munna Point area with the top of the tide seeming to be the best time. Surface poppers like the Lucky Craft G Splash and fast retrieved smaller Halco Twisties have both been successful. Bream have been prevalent throughout the lower parts of the system and are feeding well on fresh mullet strips, salted bonito and cut pilchards. Whiting are also in good numbers around the Dog Beach and the Frying Pan, worms, yabbies and peeled prawns have been the gun baits. Heading upriver Mangrove jacks have been in good numbers between the lakes. Flathead and small Jew have been taken at entrance to Lake Cooroibah and Lake Cootharaba.  Mud and sand crabs are still on the move throughout the systems. Fresh mullet has been getting the quality specimens and it is best to leave pots set for at least a full tide change.

Off the Rocks in the National Park; good sized bream, squire and sweetlip are being caught on pilchard and squid baits. The North facing areas have been the safest with the strong southerly winds.

Beach conditions have also been a little tough for anglers as well. With the bigger swells we have had in the past weeks, good gutters have formed in close, anglers have been having success with smaller lighter rods, casting small slugs, micro jigs and smaller 2-3” soft plastics picking up dart, chopper tailor and small trevally. If the weather improves a trip up the North Shore should see some good results with bigger tailor and jew hunting in those same gutters on the late night tide.

Lake MacDonald and Borumba dam have  both fishing very well for bass and saratoga .Divers and surface lures worked along the edges of lily pads and timber has  worked well in both Kingham and Yabba Creek arms of Borumba and the upper reaches and Botanical gardens of Lake MacDonald. For the surface try; Strada Zeida and OSP Bent Minnow and for divers try Combat Crank Mini and Valkein Horizard divers.

Now for all the  latest information log onto www.fishingnoosa.com.au for up to date bar and fishing reports, don’t forget to drop into Davo’s Tackle World, Davo’s Boating and Outdoor in Noosa and  Davo’s Northshore Bait & Tackle at Marcoola to find out where the fish are biting, and remember Tight Lines and Bent Spines! offshore conditions