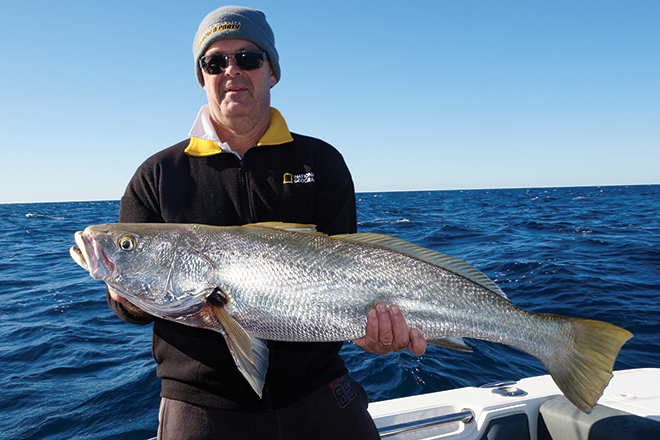 Greg Cullen was rewarded with the best fish of the day.

IT is that time of year when we are spoilt for species to target offshore. On the shallow grounds we’ve seen a lot of offshore mulloway or jewies as they are affectionately known. Most people associate them with inshore estuaries, rock walls and structure close to river mouths, but they certainly aren’t limited to those areas.

The range of these fish offshore can be considerable as over the years I have caught the odd one in up to 140m of water. Pulling in the first one at that depth, I thought maybe the fish got lost, but since then it has occurred in a couple of deepwater locations away from other structure and with great bait-holding capacity.

So, looking for jewies offshore, you are more likely to find them around the shallow reefs on a more consistent basis at this time of year and again, like in the deep water, focus on the more isolated pieces of structure that hold plenty of bait and are located away from the main reef lines. Having said that, the jewies are schooling fish and will still get caught on mainstream reefs including Shallow Tempest and the 29-fathom reef off Moreton Island, but those mainstream areas are not their sole habitat.

Parts of the 29s that are broken away from the main reef line are more favourable, as are any shallow wrecks close by on the seabed. A lot of broken pieces of reef with nice rises immediately south of Cape Moreton to the north of Shallow Tempest hold jewies and these types of structure extend well down along Moreton, around the Point Lookout area and past the Jumpinpin Bar and off the shallow Gold Coast reefs.

The funny thing about these offshore jewies is they will feed pretty well throughout the day and go very well at night too. At night they seem to like a big slab of bait such as tailor, mullet, bonito or slimy mackerel and you can either anchor or drift fish for them, with the period a couple of hours either side of high tide a prime time.

During the day I like to target jewies with live baits such as slimies, and the bigger the better. If you’re lucky enough to jag some legal-sized tailor and are able to keep them swimming in the live bait tank, then you have the perfect daytime bait.Live yakkas work, but probably rate not as highly as their preferred bait.

The ideal rig is quite subjective and many people have strong opinions, but keep in mind jewfish patrol the area around the seabed, so it doesn’t matter too much what rig is used as long as (a) the jewies are in residence and (b) the bait is kept in the zone where the fish are hanging out. My best jewie so far this winter went just over 120cm on the measuring stick cut into the SeaDek flooring on the 685 Cruise Craft, and at 16kg on the scales it was a pretty good fish, but they can get a lot bigger.

The rig was 50lb braid with about 3m of 60lb fluorocarbon leader joined by an improved version of an albright knot that Peter Stanley from Mossops Tackle World showed me. A running sinker to a pair of Mustad 7766 hooks joined by a swivel were attached to a whole tailor and as soon as it hit the bottom, wham, the jewie just smacked it.

Many of the other jewies recently caught on my boat have been on paternoster rigs. The advantage being, if no jewies are on that particular pinnacle, a nice cod, snapper or maori may take your live bait, or a bottom feeder such as moses perch, teraglin and parrotfish might be attracted to your flesh bait. On the paternoster, 8/0 circle hooks such as the Mustad 39951NPBLN work very well pinned through the cartilage on a live bait’s snout, or if you prefer an offset hook, an 8/0 in a Mustad Octopus style will do the job well too.

George recently scored a new Shimano Biomaster 10,000 spin reel from Mossops to use on our upcoming Swain Reefs trip, with a view to it replacing the handline around the shallow bommies, so we headed offshore to test it out. I must say he has the knack of nailing good fish, and his first-ever fish on the new reel was a nice cod caught on one of the floated twin-hook 7766 rigs with a livie intended for a jewie.

Not a bad by-catch but he nailed the jewie we were chasing a little later when we ventured to a small isolated patch of rock in the lee of a building southwesterly wind. While sitting on the anchor riding out the wind, the jewie just smashed the whole tailor we pulled from under the boat on the bait jigs.
That fish really tested the knots and the reel that was perfectly mated to a Venom 6’6” spin PE2.5 rod.

An excellent combination, and for George it was just a matter of patiently turning the fish’s head and methodically taking his time working it up to the surface. A big smile from George was testament to the effectiveness of the reel and he said he enjoyed the power of the reel while retrieving as well as its light weight and ergonomics.

This might just be enough to see the handline pensioned off. Actually, my overhead reels and the 5000 Daiwa Saltiga have been copping some work on big fish lately too. A crew from the Wynnum Manly RSL Fishing Club bagged out on jewies one trip when we ventured south for a change. Sue and Theresa persevered and after some initial bust-offs nailed some quality jewies as a reward for their efforts, but it was trip organiser Greg Cullen
who landed the fish of the day.

I get a kick out of seeing people who don’t get to tangle with large fish very often take home some good fillets, so for Sue and Theresa to work so well together and help each other out so successfully was a real hoot. The icing on the cake came shortly after when mother and daughter, Stephanie and Mackenzie Cook, took their maiden offshore trip.

To go home with cracking jewies was beyond their initial expectations, but for 10-year-old Mackenzie the day was just one big thrill after another. Who could get bored out there with so many whales, dolphins and seabirds around you, and to catch nice fish on top of that was a bonus.

Bill has been spearfishing, fishing and surfing for all his adult life and now runs a business specialising in teaching people how to cross coastal bars and fish offshore. He also runs charters for people who fish for the right reasons and whose company Bill thinks he will enjoy. He’s been running his bar crossing business successfully since 1996 and hopes to continue doing so for years to come as he grows old disgracefully.
Previous Formosa’s new lockable enclosed cabin Hard Top
Next Picturesque drive to Queen Mary Falls