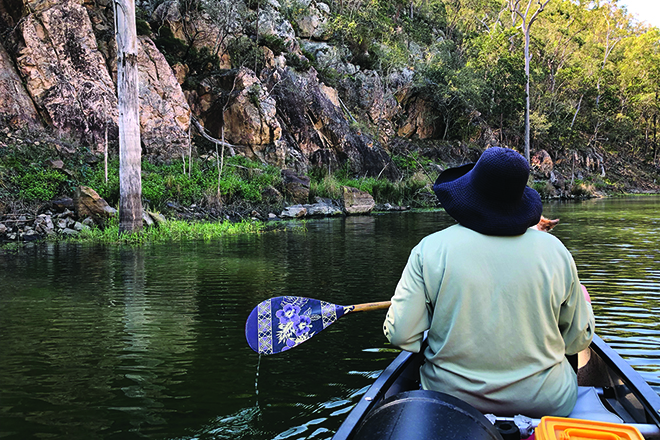 Sandy Creek Gorge on Lake Somerset (a platypus was spotted).

IF Brisbane is known as the River City, then Somerset Region must have to be Queensland’s Lakes District, though a little different to the one in Cumbria, northwest England. Wivenhoe and Somerset dams are Queensland’s third and fourth-largest dams respectively, and the lakes they form are fantastic boating, fishing and of course paddling destinations. At only one to 1.5 hours’ drive from the CBD, they are right on Brisbane’s doorstep to visit for a weekend on the water. The following is a quick guide to what the area has to offer.

Lake Somerset is the northernmost dam and the smaller of the two. It is fed by the Stanley River and feeds into the top of Lake Wivenhoe. Construction started in 1935 but was not completed until 1948 due to World War II. Somerset’s primary function is to supply water to Brisbane and the Gold Coast and it’s also used for flood mitigation and hydro-power generation. In addition to its functional requirements, Somerset is an excellent recreational lake and has been providing the residents of Queensland with great outdoor adventures for over 70 years.

Though it is a regular power boat dam, Somerset still provides excellent paddling opportunities once you move away from the nominated skiing areas. It does have over 4300ha of surface area after all! Public launch areas are available at Kirkleigh on the northwestern side or the Spit on the southwestern corner near the wall. The Spit is my preference out of the two as it gives better access to the more mountainous and scenic banks of the southern part of the lake. Camping is available at Somerset either from the caravan park at Kirkleigh or the private campsite at Camp Somerset on the southeast corner. For me, however, without a doubt the best way to access Somerset is via the boat ramp at Westvale Rd on the Stanley River as it enters the top of the lake.

The birdlife is incredible and the scenery among the standing timber on the banks and in the water is spectacular. The speed limit in this area is six knots, so conditions definitely favour paddle craft. Between Somerset and Wivenhoe are the Stanley River and the confluence of the Brisbane River. This area is fun to explore and offers river paddling with the advantage of year-round steady water levels. Access to the Stanley River below the dam can be had at the Somerset Park Camp Ground, though you must be a paying guest at the campsite to access it.

Alternatively, access to the upper Brisbane River can be had at O’Sheas crossing. O’Sheas is a great place to launch from and explore the top reaches of Wivenhoe and the Stanley and Brisbane rivers. The access is good to the water and is limited to paddle craft only. If you’re keen, it’s possible to paddle from here all the way along Lake Wivenhoe.

Lake Wivenhoe is the larger of the two lakes and the southernmost. It is fed by the Brisbane River and the run-off from Somerset Dam. Built in 1985, it was designed as a flood mitigation dam but also serves to provide water supply and hydro-power through Splityard Creek Dam. Best part about Wivenhoe? It’s speed limited to six knots!

Wivenhoe has four main access points for paddlers (five if you include O’Sheas) that cover primarily the southern part of the lake. Access on the western side is via Logans Day Use Area and Hamon Cove. Access on the eastern side is from the Billys Bay/Hays Inlet or Branch Creek launch sites. Both are located in the Billys Bay general area. Each of the access points offers a different experience on the lake.

The eastern launch sites offer the more scenic paddles accessing the cliffs and wooded terrain above Billys Bay, while the Logans launch provides access to either Captain Logan Creek heading west or McGraths Bay heading east. For the more adventurous, there are options for extended journeys on the lake. Some of our favourites are paddling from Hamon Cove up to Sandy Creek Gorge and return (27km) or paddling from O’Sheas crossing to Logans (40km).  I guess it depends how keen you are!

Camping at Wivenhoe is limited to Captain Logan Campground beside the Logan Day Use Area. It is, however, a great campsite and gives access to some of the better parts of the Lake. You have the ability to launch paddle craft directly onto the lake from the campgrounds.