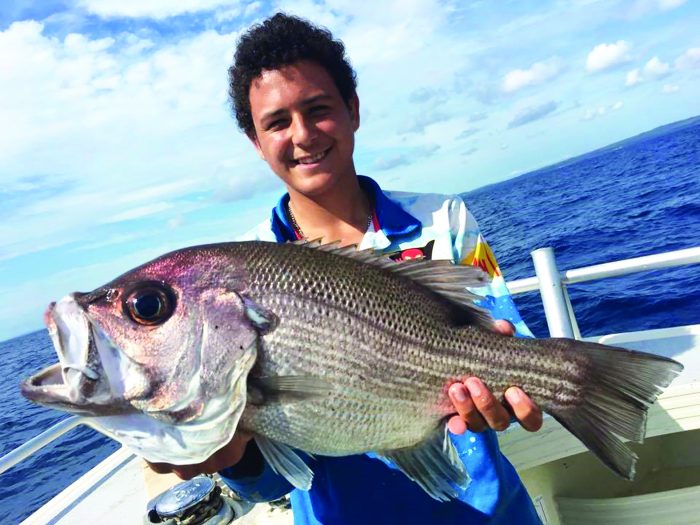 Smurf held a pearlie he scored on board with the author.

AS a lot of readers would know, pearl perch are up there with the best eating fish in the sea, and in my eyes they take the number-one spot above even coral trout and red emperor.

In southeast Queensland, we are lucky enough to have one of the best pearl perch fisheries at our doorstep.

In this article I will go over the tactics I use when targeting a feed of pearl perch, from back to basics methods to using lures. So let’s start with the basics. The easiest way to catch pearlies is to bottom bash with fresh baits on a two-hook paternoster rig.

This rig is as simple as it gets but don’t the let simplicity fool you because it’s easily the most effective. To begin, simply sound around and find the area where you want to fish, looking for structure such as rocky bottom and broken ground with wire weed.

As I’ve said multiple times, a good-quality sounder is the key to knowing what sort of ground you’re fishing and finding fish. Once you have completed these steps, it’s time to bait up your two-hook rig with fresh baits. For the top hook on your paternoster, I would run half a pilchard and for the bottom hook (a 7/0 Gamakatsu) I would thread on a strip of fresh mullet.

I find these two baits the best for pan-size pearl perch. When I want to step it up a gear and catch the beastly pearl perchover 60cm, I like to drop back to one circle hook and run a live bait, slimy or yakka. Once you’ve reached the bottom, it shouldn’t take too long before you start to get the pearlie tap (if you’ve used your electronics correctly, that is!).

Once the taps start occurring, leave the Bay pearlie alone for a second and then strike. The strike doesn’t have to be over the top – just a sharp lift and you should be on. If using a circle hook, remember to lift slowly and allow the hook to do its job and roll around in the fish’s mouth to pin it perfectly in the corner of the jaw.

Pearlies will fight a little close to the bottom but not too much unless they are big fish. The trick is not to go too hard on them because they have incredibly soft mouths and you can easily tear their skin, making your hooks fall out. I’ve seen it thousands of times!

Float lining is another really effective way to get bigger pearl perch. Again it’s a very simple method and not all that hard to do. A nice flesh bait or whole pilchard rigged on triple-ganged hooks will do the damage. The same principles apply to finding the fish and setting up your drift.

Then you simply need to get the floater down to the bottom and keep in contact with it at all times. Now for my favourite way to catch the humble pearlie: the artificial way, on metal jigs and soft plastics. As I jig, I always wonder why these fish would want to hit a piece of metal flapping around in the water.
Is it out of aggression because the jig is in the pearlies’ home and they want it gone? Or is it because they are just that hungry and keen for a feed? Either way, jigging for pearlies works!  A lot of people don’t bother jigging because pearlies are fairly easy to catch on baits, but they are a heap of fun to hook on the micro jigging and lighter soft plastic gear I love to use.

In my mind, one on the fake is better than 10 on the baits. A slow-pitch jigging technique is best for pearl perch. Long drops back are when they normally smash the lure. To achieve this technique, lift the rod fairly high quite quickly and then allow the micro jig to flutter back to the bottom.

You don’t need to wind the reel in this technique; it’s just a high lift off the bottom.  As the jig flutters back down as it’s designed to, pearlies will smack it and on lighter jigging gear they will usually put up quite a scrappy fight. Keep pressure on the fish because if you give them any slack line, they will just fall off. 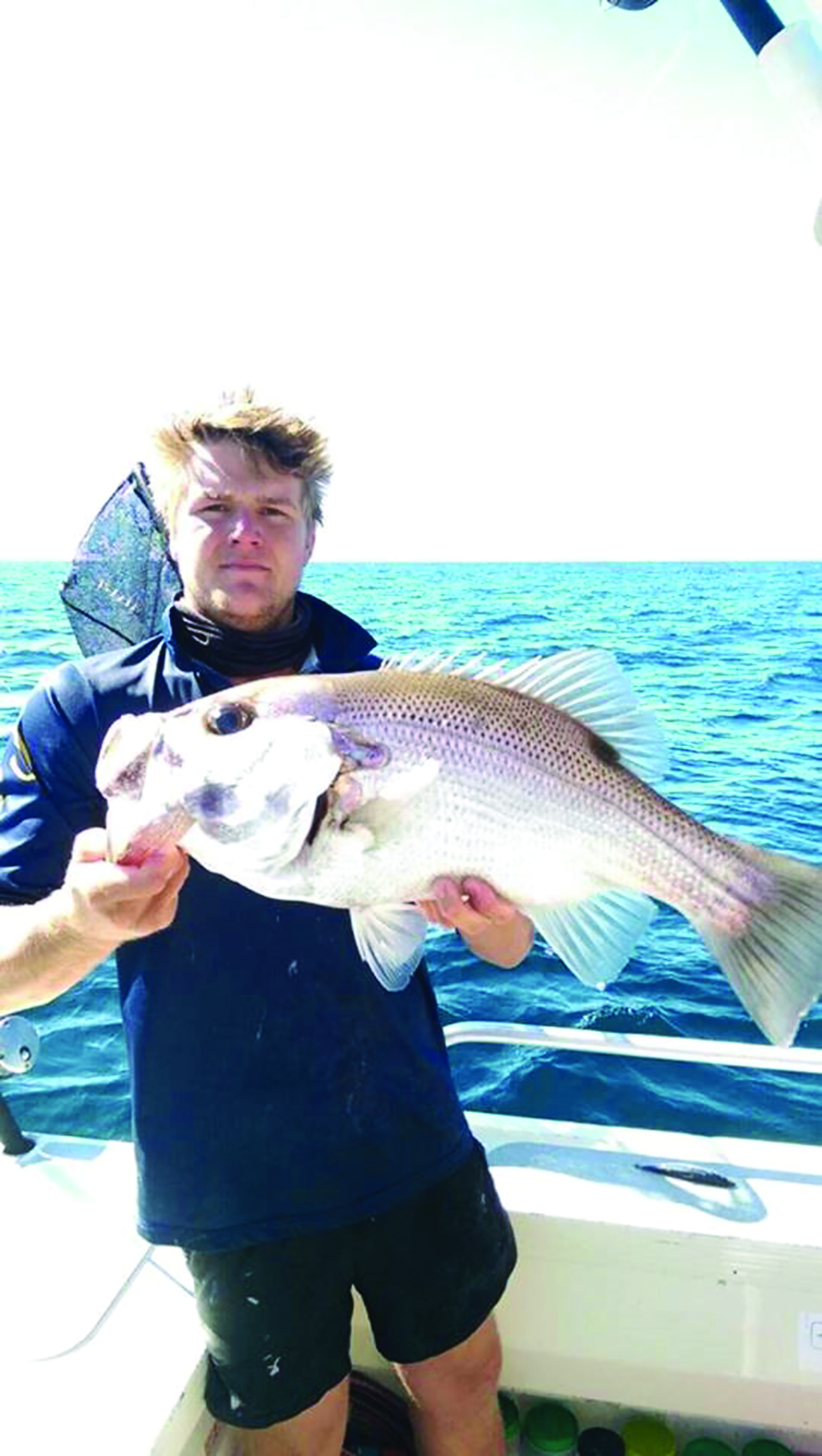 I use a very similar technique with plastics but I like to make the soft plastic fall as slowly as possible by keeping in contact with it and lowering it using the rod tip.  I’m not sure why but it has worked plenty of times for me, especially with nice high lifts similar to those when using jigs.

Lure choice isn’t too big a deal when fishing for pearl perchbecause they normally smack most things presented in front of them. Any sort of micro jig up to about 150g works well, though I have had pearlies eat jigs up to 500g when jigging in deep water for amberjack and kingfish.

With soft plastics, anything over 5” long that glows in the dark will do the job. I also like to run a glow in the dark jig head for that little bit extra in the darkness of deep water. If you are interested in fishing for pearl perch with me, you are very welcome to jump aboard Moreton Island Fishing Charters.