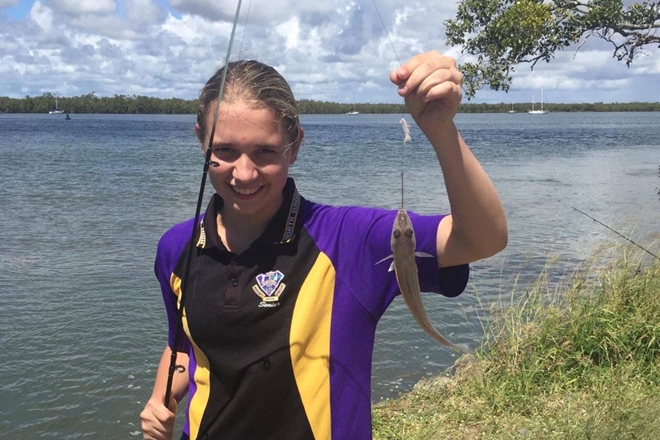 Amy Beutel with a whiting she caught in the Burnett River recently during a North Bundaberg High School aquatics class outing.

We were lucky enough to get a spell of good weather around the Bundaberg area earlier this week, allowing a few boats to head out in among the action.  Most of the inshore reefs produced plenty of pelagic action, with heaps of queenfish, trevally and mackerel all being caught.  There has been a good mix of school, grey and Spanish mackerel among all the pelagic action, and most have been caught by high-speed spinning with metal jigs, and the range of Flasha lures has been the stand-out. There has also been a few reef fish taken from these areas.  Red emperor, jew, sweetlip and a few big grunter have all been caught.

Both of these systems have started to clean up and with this, a lot of fish have started to move back upstream.  Some quality fish, including jacks have been caught by live-baiting around the rocky areas.  The main channels leading out to the river mouths have seen some great flathead on the drop-offs and plenty of bream and grunter running up and down the channels.  There are still a few crabs and prawns about these areas also.

The Burnett has started to clean up very well.  Plenty of salt water has pushed up, making for some great fishing, with a lot of the sand bars producing some great whiting, flathead and sicklefish, mainly by fishing the run-out tides.  The rock walls and holes have held good numbers of big bream, grunter, cod and a few jacks.  Soft vibe lures or live-baiting have been the way to go.  There has been a few large king salmon in the deeper holes, with live prawns being the way to target the king.  There are plenty of crabs about as well as a good number of prawns.

The Elliott is still producing a few fish, mainly whiting and flathead on the flats, and a few black bream and mangrove jacks off the snags further upstream.  There have been a few prawns reported out of this system also.

Isis (Lake Gregory) is producing a few early morning bass, mainly on surface lures or by jigging the bass on vibes later in the day.

Wuruma and Cania have also been fishing well for bass with some cracker bass being caught in big numbers.  Most of the bass have been sitting on the edges of the main creeks beds.  Soft vibes or small soft plastics have been the best for bass.  Both of these dams have been going well for redclaw crayfish, so don’t forget your opera house pots as the crays are thick.

A few nice barra have been caught this past week.  Most of the barra are in the 60cm to 80cm size range and have been in reasonable numbers.  The key to the Monduran barra is to use smaller barra lures in the 3” to 4” size range, with a few stand-outs such as the 78mm LuckyCraft Pointers and the Zman 4” Swimmerz soft plastics.  So, get out there and try your luck.